Late last year, Air Products commissioned its latest hydrogen production/cogeneration plant next door to a Valero Energy Corp. refinery in Port Arthur, Texas. The Port Arthur II Integrated Hydrogen/Cogeneration Facility (Figure 1) was designed and built by Air Products under a long-term supply contract with Valero. What sets this project apart from the typical gas turbine–fired cogen plant "over the fence" from a refinery is its successful integration of combined-cycle generation technology and steam methane reformer (SMR) technology. The results are impressive: The plant simultaneously produces about 100 MW of electricity, 110 million standard cubic feet per day (scfd) of hydrogen, and up to 1.2 million lb/hr of steam. 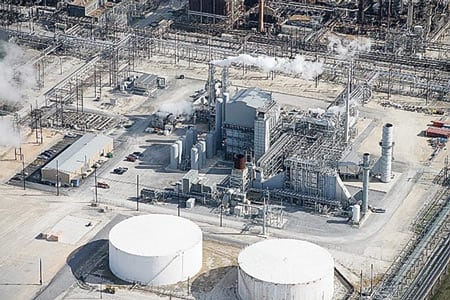 The refinery, on a 4,000-acre site about 90 miles east of Houston, needs all of those inputs because it’s big and versatile. It converts more than 300,000 barrels a day of crude oil (including 100% sour crude) into jet fuel, low-sulfur diesel fuel, petrochemical feedstocks, petroleum coke, and conventional and reformulated gasoline.

Construction of the integrated hydrogen plant began in April 2005, 18 months before coming on-line. Commissioning and start-up of the integrated plant was handled by Air Products. Start-up was delayed almost four months by the destruction wrought by Hurricanes Katrina and Rita.

The relationship between Air Products and Valero has already paid dividends to both firms. Now that its refinery has secure supplies of hydrogen, steam, and electricity, Valero can concentrate on its core business of refining crude. For its part, Air Products can focus more on its expertise: producing hydrogen and co-products.

Port Arthur II is one of only a handful of SMRs worldwide with an integrated gas turbine. The facility design typifies a trend among refiners to outsource their needs for three key utilities—power, steam, and hydrogen.

The plant design must be considered evolutionary because Port Arthur II is the third integrated hydrogen/cogeneration facility that Air Products has built over the past decade. The first, completed in 1996 in Los Angeles, had an 80-million-scfd SMR and a 30-MW extraction/condensing steam turbine-generator. The second facility, also serving Valero at Port Arthur, which came on-line in 2000, produces 105 million scfd of hydrogen using a 37-MW GE Frame 6B gas turbine-generator. With each project, the plant and process design and integration with the refinery became more complicated.

The difficulties of system integration relate to the roots of the plant design and how the refinery is operated. For example, since early 2007 the Valero refinery has used hydrogen supplied by Air Products to make new, ultra-low-sulfur diesel (ULSD) transportation fuels, with a 15 ppm limit. The lower level applies to all diesel fuels, diesel fuel additives, and distillate fuels blended with diesel for on-road use.

The increase in steam and power production from the new Air Products facility has allowed Valero to shut down some older refinery boilers. This, in turn, enables the company to voluntarily reduce its NOx emissions, despite the higher power and steam requirements of the new diesel-powered hydrotreater that distills crude into ULSD fuels. The hydrotreater desulfurizes the diesel after atmospheric distillation, but it requires hydrogen to do so.

A refinery that wants to produce ULSD fuels could get the needed hydrogen as a by-product of catalytic reforming, but there’s usually not enough room on-site for a unit of sufficient capacity. Another potential source for refineries along the Gulf Coast is Air Products’ West Gulf Coast network of hydrogen pipelines. It serves about 50 refinery and process industry customers with facilities in an area bounded on the west by the Houston Ship Channel, on the east by New Orleans, and on the north by Baton Rouge. The West Gulf Coast network has a capacity of over 900 million scfd of hydrogen. Air Products is the world’s largest third-party supplier of hydrogen.

Port Arthur II is the latest of 30 major refinery projects featuring SMRs that Air Products has built over the past 15 years in partnership with Paris-based Technip (www.technip.com), a leading provider of engineering and construction services to producers of hydrocarbons and petrochemicals (Figure 2). For the Port Arthur project, Technip supplied the engineering and design expertise for the SMR while Air Products provided overall project management, construction management, cogeneration engineering expertise, and the pressure-swing-adsorption (PSA) system for hydrogen purification. The companies worked together to develop the process and heat and material balances needed for integration with the gas turbine cogen plant. 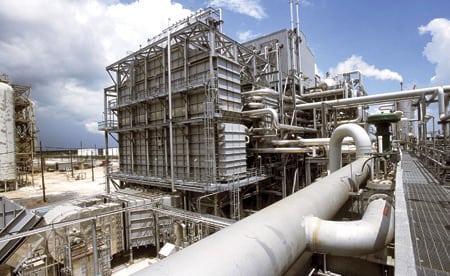 3. Tightly knit. Port Arthur II’s operations, detailed by this flow diagram, are closely coordinated with those of the refinery. Source: Air Products

The GTG’s exhaust is normally shared by the SMR and the HRSG—from Deltak LLC (www.deltak.com)—to increase the efficiency of the hydrogen and steam supplies. The design allows each unit to operate fully independent of the GTG in fresh air–fired mode when the GTG is off-line for maximum reliability.

Together, the HRSG and the hydrogen plant can deliver up to 1,200,000 lb/hr of steam at 125 psig and 650 psig. The Deltak HRSG is designed for supplemental firing throughout its output range up to 550,000 lb/hr. The HRSG is also designed for rapid response with a demonstrated ramp rate capability of 60,000 lb/hr per minute when operated in fresh air mode or fired by natural gas, refinery gas, or GTG exhaust. A close inspection of the lower left of Figure 2 reveals separate fresh air–fired dampers feeding the SMR and HRSG located in the GTG exhaust ducts.

The flows of steam to the refinery vary continuously, based on its demand. The steam, supplied by both the SMR and HRSG, enters the Dresser-Rand (www.dresser-rand.com) 20-MW backpressure STG, which either extracts the steam at 650 psig or exhausts it at 125 psig, depending on the need for it and its availability. Some of the 650-psig steam is used by the SMR for hydrogen production; the rest is sent to the refinery by a 650-psig header. The 125-psig steam is used within Port Arthur II for boiler feedwater deaeration; the balance is exported to the refinery by a separate header at that pressure. Steam desuperheating (letdown) stations operate automatically to produce the high- and low-pressure flows of process steam needed to satisfy the refinery in the event of an STG outage or trip.

The SMR process reacts a hydrocarbon with steam over a nickel-based catalyst to produce a mixture of H2 and CO generically known as synthesis gas (syngas). Major steps in the process include sulfur removal, reforming, water-gas shift (WGS), and H2 product purification. To maximize H2 production, the WGS reaction is continued downstream of the furnace in a high-temperature shift (HTS) converter containing a different type of catalyst.

With sulfur removed from the feed to protect process catalysts, the highly endothermic SMR reaction occurs at high temperature and pressure in catalyst-filled tubes suspended in the radiant section of a furnace. Heat for the reaction is supplied by gas-fired burners in the furnace.

After shift conversion, the hydrogen is separated from the syngas in a pressure-swing adsorption unit capable of producing hydrogen with a purity in excess of 99.9%. The other components of the PSA feed, and some hydrogen, end up in the so-called PSA purge gas, a low-Btu gas that is recycled and is the bulk of the fuel for the reformer-furnace burners. The combustible components of the PSA purge gas are hydrogen, carbon monoxide, and methane. Natural gas or refinery fuel gas is typically used as the burners’ auxiliary, or trim, fuel.

Reliability: A must for any refinery

During a GTG outage or trip, ambient air is used as combustion air in both the SMR and HRSG, although this requires increasing the level of fuel flow to compensate for the lower air temperature. During short periods of SMR downtime, the GTG can be operated at reduced output, exhausting to only the HRSG, or in less-efficient simple-cycle mode without heat recovery; in these cases, the turbine would exhaust through its own stack. This configuration improves safety by isolating the turbine’s hot flue gases from the furnace, facilitating unscheduled or emergency maintenance of the SMR.

Port Arthur II is dispatched as a function of the refinery’s power and process steam needs. The control scenarios must weigh dozens of supply options and determine the optimum combination of GTG load, duct firing by natural gas or refinery fuel gas, and steam turbine load. The HRSG’s steam production is independent of the SMR’s throughput, so it can be supplemental-fired at any GTG operating conditions. Needless to say, the power plant and refinery staffs work closely to ensure that all available refinery fuel gas is used to produce power and steam.

Staffers of Port Arthur II report the plant has so far operated very reliably, considering its complexity and the need for high reliability. Despite running 24/7, the plant also runs lean, with a Spartan staff of eight operators—at least two per 12-hour shift.

As part of Port Arthur II’s post-commissioning shakedown, plant staff has concentrated on making control algorithms more robust. For example, because the GTG supplies combustion air to the HRSG and the SMR, its controls must be tuned to accommodate a variety of operating conditions imposed by those units and the refinery. The system’s response to a GTG trip must be very timely. If the turbine trips, the system automatically opens dampers and transitions both the SMR and HRSG to fresh air–firing mode within seconds while maintaining operating parameters within limits at the same hydrogen and steam outputs.

The tight integration of the two systems also poses challenges for the Siemens Energy & Automation (www2.sea.siemens.com) APACS+ DCS controller at Port Arthur II, whose signals are shared by the refinery’s operations staff. If the power plant loses the SMR or HRSG, the refinery can automatically pick up a portion of the steam load if necessary.

Tom Heller, manager of Port Arthur II, reports that the controls are so complex that operators are reminded to trust them during transients and resist the temptation to intervene. Naturally, when an unexpected excursion occurs, plant staff will review the performance of the control system and recommend modifications to continually improve operating performance.

Finally, POWER gives a shout-out to the I&C experts of Air Products who have handled—and continue to handle—all of the programming and tuning of the complex control system.