The Kingdom of Saudi Arabia is facing major population growth over the next decade: The country is expected to grow from 28 million to 40 million by 2020. With this added population will come substantial added demand for electricity—approximately 8% per year, meaning its power generation capacity may need to double within 10 years. The kingdom’s total installed capacity in 2009 was 44.5 GW, almost all of it from oil and gas combustion. The country has also struggled with razor-thin reserve margins, which have hovered around 3%, resulting in rolling blackouts during summer months. The Electricity and Cogeneration Regulatory Authority estimates that Saudi Arabia will require at least 35 GW of new capacity by 2019, and as much as $80 billion of government funds have been earmarked for electricity generation.

Though there has been discussion of building as many as 16 nuclear reactors in Saudi Arabia, the complicated politics of the Persian Gulf region make these plans uncertain. As a result, with its large oil and gas reserves, the country’s fast-growing power demand is primarily being met with high-efficiency combined cycle power plants—many of them among the largest in the world.

Riyadh Power Plant No. 9, just over 50 kilometers (km) east of the capital city, is the largest primarily simple cycle plant currently in operation. Comprising six blocks covering 3.2 km2, with a total of 56 gas turbines and four steam turbines, the entire project has almost 6 GW of generating capacity. Construction began in 1995, and the most recent expansion was completed in 2008. The turbines run on a variety of fuels, from natural gas to diesel to crude oil.

Construction of Riyadh Power Plant No. 10, which began as No. 9 was being completed, will be nearly as impressive when complete (Figure 1). Located on a 5-km2 site outside the capital, the first phase, comprising 40 55.91-MW GE Frame 7EA turbines operating in simple cycle mode, recently commenced operations. The second phase, which will upgrade the plant to combined cycle mode, will comprise 40 NEM Energy dual-pressure heat recovery steam generators (HRSGs) and 10 GE SC-series steam turbines. The gas turbines will be arranged in 10 blocks in 4 x1 configuration. When complete, Riyadh Power Plant No. 10 will be the largest combined cycle plant in the world, with a total capacity of 3.5 GW, and will supply approximately 20% of the power needs for the capital’s 5.2 million inhabitants. It will operate mainly on crude oil. 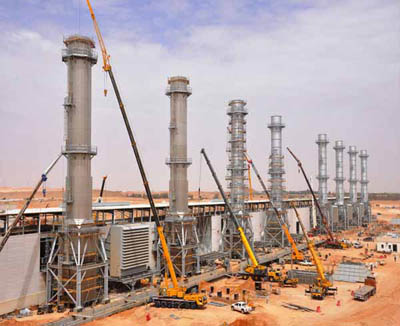 1. Riyadh Power Plant No. 10, currently under construction, will be the largest combined cycle plant in the world—though not for long. Courtesy Arabian Bemco

Both plants are owned by Saudi Electricity Co. (SEC), and construction is overseen by Arabian Bemco Contracting, which in recent years has installed 22 GW of generating capacity in the region.

Arabian Bemco is currently working on another project expanding a simple cycle plant to combined cycle. The 2.5-GW plant at Al Qurayyah on the country’s east coast, which currently comprises 15 GE Frame 7FA turbines in simple-cycle mode, is being upgraded with the addition of 15 HRSGs and five GE steam turbines. The additions will boost output by 1,300 MW when the project is completed in 2015.

Other similarly huge projects are currently in the works. In February, Siemens announced that it will be supplying key components for the planned Qurayyah independent power producer (IPP) combined cycle plant. The six-block project, which will comprise 12 SGT6-5000F gas turbines, six SST6-4000 steam turbines, and 18 SGEN6-1000A generators, is expected to commence operations in June 2014. With a capacity of 4 GW, it will be able to supply enough electricity to meet approximately 10% of the country’s current demand.

Unlike Riyadh Power Plants 9 and 10, Qurayyah will be owned and operated by an IPP, the Hajr Project Co. This joint venture—owned by SEC, Saudi company ACWA Power, Samsung C&T, and Mena Fund—will be constructing the largest IPP project in the world.

Despite the hot climate, Qurayyah IPP will have a net efficiency of 52%, making it one of the most efficient plants in the country. Siemens Energy will provide long-term maintenance for the major equipment. Last year, Siemens announced plans to build a gas turbine production and service center in Saudi Arabia.

Meeting Power and Water Demand Together

Electric power is not the only potential shortage facing this desert country. With its growth in population, the demand for potable water is also projected to grow strongly. Thus, it is not surprising that Saudi Arabia has also seen construction of several huge integrated water and power plants (IWPP). The largest—indeed, the largest IWPP in the world—is the 2,745-MW facility in Jubail on the east coast (Figure 2). The joint venture project between SEC and several other Saudi and foreign companies produces 800,000 cubic meters of water per day in addition to the electricity. 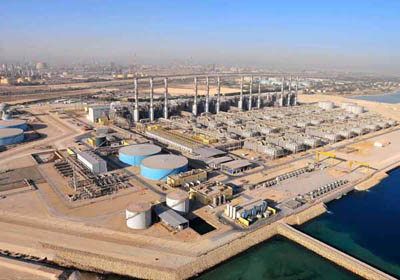 2. The integrated water and power plant at Jubail is the largest in the world. Courtesy: Sidem

The Jubail IWPP comprises 12 gas-fired GE 7001FA turbines, four Doosan HRSGs, and four steam turbines. Process steam from the HRSGs is supplied to the desalination plant, where the 27 desalination units employ multiple-effect distillation with thermal vapor compression to produce freshwater. The process involves boiling seawater in multiple stages at successively lower pressures; the steam is condensed in the downstream stage to form distilled water. The design makes efficient use of the incoming thermal energy, delivering 9.85 metric tons of water for each ton of process steam. The distilled water is then re-mineralized to meet potable water standards.

An even larger project than Jubail is currently underway in the city of Ras Al Khair, 100 km to the north. When it comes online in 2013, the Ras Al Khair IWPP will produce over 1 million cubic meters of water per day, boosting Riyadh’s current supplies by 50%. The combined cycle plant, powered by 12 Siemens gas turbines, will deliver much of its 2,660 MW to a nearby aluminum smelting plant. It will also employ a hybrid desalination process using both thermal and membrane technologies.

Gas Shortages on the Horizon

For all these mammoth initiatives in construction and infrastructure spending, some experts see trouble on the horizon. The ironic wild card is that Saudi Arabia, despite having the world’s fourth-largest natural gas reserves, regularly struggles with meeting domestic gas demand and is sometimes required to import it, mostly from neighboring Qatar.

As a result, a substantial number of aeroderivative turbine power plants in the kingdom run on heated crude oil rather than gas. Though running a turbine on crude oil is not especially complicated, the fuel must be cleaned of water and contaminants first, and turbine operation requires specialized procedures, support equipment, and maintenance not involved with burning gas. Consequently, the use of crude oil as a turbine fuel tends to be more expensive and less efficient.

The reasons for the kingdom’s shortage of natural gas are complicated and not easily addressed. The root of it lies in Saudi Arabia’s historic role—and self-image—as a key crude oil producer. Most of the economy and government policy is geared toward maintaining a stable international oil price. Until recently, nearly all of the gas produced in the kingdom has been from associated deposits, that is, gas produced as a by-product of crude oil production. Because the country’s crude oil output is governed by OPEC quotas, its gas production has been similarly hamstrung. Domestic gas demand has historically taken a back seat to managing crude prices and production.

Even worse, government policies that have served to reinforce this hierarchy undermine any motivation to develop non-associated deposits, which are not subject to OPEC quotas. For example, government subsidies allow the kingdom’s petrochemical plants to purchase ethane at a startlingly low price of $0.75/MMBtu, a policy that has remained unchanged since 1998. Such prices are well below market rates even in the U.S., let alone Europe, and even fall short of production costs. (Much of the non-associated Saudi gas reserves are "tight gas," which is more expensive to develop than associated gas.) What gas development has taken place in recent years is primarily aimed at more lucrative natural gas liquids.

Gas prices are also heavily subsidized at the consumer level (as are a great deal of other elements of life for the average Saudi), and any attempts to reform this regime could be politically risky. Likewise, the prospect of substantial gas imports is politically unpalatable to the kingdom’s leadership.

Still, the Saudi government has recognized the problem, and Saudi Aramco (the national oil company) has launched a series of projects aimed at exploring and developing more of its non-associated gas reserves (Figure 3). In January, it announced a $200 billion spending program, part of which is earmarked for gas exploration. It has also awarded a number of contracts in the past few years to foreign companies to search for gas in the Rub al-Khali (Empty Quarter) region in the nation’s south. The initial results have been inconsistent, though Saudi officials remain optimistic—in 2009, the kingdom’s production of non-associated gas exceeded that of associated gas for the first time ever. 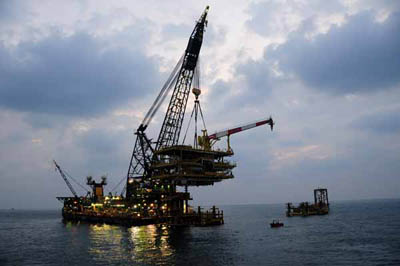 3. The Karan gas field in Saudi waters of the Arabian Gulf was discovered in 2006, and Saudi Aramco has earmarked significant funds for its development. Courtesy: Saudi Aramco

Although any significant boost in domestic gas production from these initiatives is years away, Saudi Aramco expects production to increase to 15.5 bcf per day by 2015, up from 10.2 bcf/d in 2010. But the Saudi oil ministry also recently declined to raise the fixed price for natural gas for the petrochemical industry and has given no indication when that might change.

In the meantime, the country will forge ahead with massive power plant projects, doing its best to chart a course between a surging demand for electricity and the limitations of its fuel supplies.