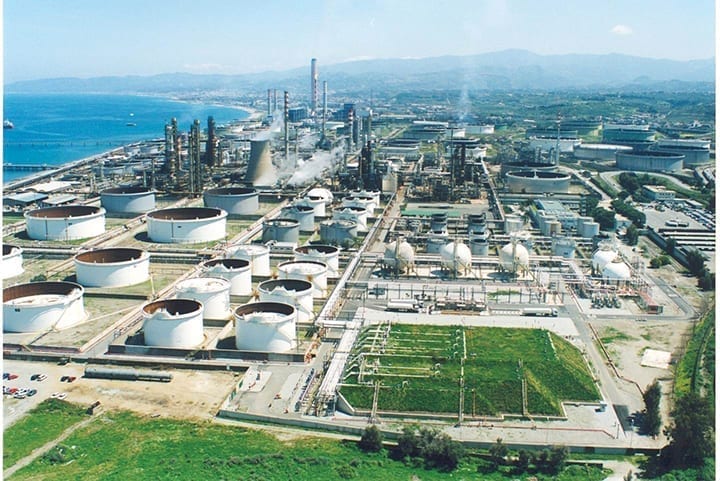 The Termica Milazzo cogeneration combined cycle power plant completed an extensive upgrade and integration project with a nearby refinery in Sicily, Italy. The successful project, which spanned about three years and included more than 100,000 man-hours of work, makes it a worthy POWER Top Plant award winner.

Eni S.p.A. and Kuwait Petroleum Italia S.p.A. own equal shares of Raffineria di Milazzo S.C.p.A. (Refinery at Milazzo, RaM). RaM, which is located in Sicily, operates within the Italian and international refining system to produce fuels and raw materials for petrochemicals.

In 2016, RaM acquired Termica Milazzo (TEM)—a cogeneration combined cycle gas turbine (CCGT) power plant located about 500 meters from the refinery—assuming full management of maintenance activities and energy production for the facility. The plant had previously sold power only to the national grid. RaM, however, had other objectives. It intended to use the facility to supply the refinery’s entire electrical load demand by integrating the electrical network, thereby increasing the reliability of RaM’s power system.

The TEM facility operates a single GE frame 9E GT (Figure 1) arranged in a single-shaft configuration with a combined cycle ISO nominal energy output of 155 MW. When acquired by RaM, the flexibility of the power plant was limited to a steam cogeneration flow of about 80 tons/hr to 100 tons/hr and a minimum emissions-compliant power turndown of 110 MW.

As part of RaM’s long-term vision for the power plant, it wanted to improve power and steam generation flexibility by reducing the minimum turndown of the GT, while maintaining emissions compliance and optimizing potential energy market trading opportunities. The company also wanted to upgrade the existing control system, which included multiple separate components, into a single, advanced and integrated system. RaM hoped by doing so, it would gain some enhanced features and innovative functions, including Industry 4.0 and Internet of Things (IoT) aspects.

Despite being located so close to each other, the refinery and TEM were totally separate from both an electrical and automation standpoint prior to the acquisition. So, RaM embarked on a complex project, which included engineering and technology solutions to achieve industrial integration between the CCGT and the refinery plant. The multidisciplinary project consisted of the following main activities:

RaM’s Technology and Engineering departments conducted important research during the design phase. The groups investigated and evaluated available products and technologies to determine the most innovative solutions for the project. Due to the various competencies involved, a classic turnkey model was adopted. Three main contracts were coordinated: Terna Rete Italia was responsible for electrical interconnections, ABB for general control system work, and GE for GT upgrades. The remaining balance-of-plant and ancillary system tasks were carried out by RaM with the support of other minor subcontractors.

The first step of the project—assigned to Terna with ABB as a subcontractor—was to connect TEM’s electric production directly to refinery loads, reaching a complete self-production configuration, with capability to export the energy surplus to the national grid. To accomplish the task, a new HV electrical cable was installed, interconnecting the two separate HV substations. The distance between the substations was about 300 meters, requiring various modifications at both sides in order to provide start/arrival feeders.

With this new interconnection cable, the existing TEM HV grid feeder was added to two existing refinery HV lines. The new configuration significantly improved electrical reliability and flexibility of the RaM-TEM and 150-kV national grid connection. Furthermore, with Terna and ABB cooperation, an additional synchronization system was studied and implemented at the interface with the national grid battery limit switch breaker, with direct control of the 9E GT MARK VIe frequency governor in TEM.

The HV electrical protection and DCS strategy had to be thoroughly reviewed and checked in order to guarantee the approval of the Transmission System Operator (TSO) grid code. It also had to comply with several specific requirements related to the detection of possible electrical faults, and potential blackout and islanding events.

Regarding HV control system architecture, an extensive integration and upgrade based on IEC 61850 bus protocol was completed through the application of a specific ABB family of products (REx600 series) for electrical protection relays. This architecture enabled an easier signal interchange and integration of HV assets, minimizing the use of hardwired signal cables, which was critical for the distances between RaM and TEM substations.

Contextually, the specific ABB software (PCM600) enables remote diagnostics and configuration control of IEC 61850 subnet, and several features related to the Industry 4.0 and IoT framework. Finally, with the support and cooperation of ABB and GE, important national grid integrated local frequency requirements were implemented and checked, according to TSO code testing. 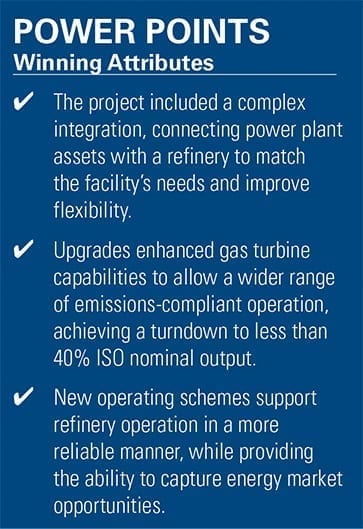 In order to expand TEM’s flexibility and effectively match its output with RaM’s electrical energy demand for both power and steam production, the project team wanted to reduce the GT’s minimum turndown as much as possible while preserving baseload performance. GE’s Axial Fuel Staging (AFS) technology upgrade was installed on the existing GT.

In detail, the following modifications and upgrades were implemented by GE on the 9E GT:

Axially staging combustion to two zones allows for increased firing temperature at baseload (while maintaining the same NOx level) by operating the later/second stage hotter than the first/primary stage. AFS technology is well-proven, having been deployed on six GE GT models—the 7HA.01, 7HA.02, 7EA, 9E, 7F, and 9HA.02. These fleets have amassed more than 300,000 fired hours and 6,000 fired starts.

IBH acts to increase air flow through the compressor while decreasing air flow through the GT. The primary use of IBH is compressor surge and icing protection. When closing the inlet guide vanes to reduce load, the risk of compressor icing increases, thus, the addition of IBH enables operation at lower loads. During low-load operation, as the GT firing temperature is reduced, percentage fuel split in the staged fuel system can either be reduced significantly or turned off, thereby keeping the overall combustion system in compliance with emissions limits over a wider range of firing temperatures.

By performing this upgrade, the TEM GT is now able to have a turndown less than 40% of GT ISO nominal power, corresponding at about 55% of whole combined cycle performance. This greatly improved upon the previous 80% turndown level. Consequently, it has also achieved an important decrease in emissions at turndown due to a reduction in GT exhaust total mass flow of about 20% (about 200,000 kilograms/hr). Furthermore, a significant improvement of GT part-load efficiency was ensured by a reduction in fuel burn.

Decreasing the minimum turndown had other impacts on the plant, however. For example, there were important metallurgy temperature limitations in the heat recovery steam generator (HRSG) superheater and in the high-pressure steam turbine. With third-party support, RaM carefully investigated and evaluated the total thermal stress to avoid short- and long-term issues on HRSG and steam turbine components.

According to CE rules (Conformitè Europëenne, which is a European Union quality standard), the HRSG had to be officially rechecked from a design point of view. This study highlighted the need for a metal upgrade of some exposed HRSG components (mainly on the medium- and high-pressure superheater) and the need to install a water desuperheater to control the temperature of the high-pressure admission section of the steam turbine. During commissioning of AFS injection technology, GE accurately tuned combustion parameters to adjust related isotherm factors in order to mitigate the GT exhaust impacts on the HRSG, matching its constraints.

During the design phase, several issues related with the fast dynamics of electrical response, refinery stability constraints, and the need to have an efficient and safe main general control capable of seizing energy market opportunities were solved. All of the related tasks planned in the integrated automation system were implemented on a unique DCS architecture based on the recent AC 800M (800xA and INFI90) ABB family of products.

The duration of the project, from its preliminary phase to completion, was about three years. It involved more than 100,000 man-hours for engineering and site work. The main GT modifications were assembled and installed during a GT major overhaul, which began in late 2018 and finished in early 2019. After the first startup, operational commissioning and tuning required several months due to necessary project optimization, finalized in the TSO official code test, which was completed successfully in September 2019.

The teamwork demonstrated by the owner and various contractors make the project a remarkable success. The editors of POWER would like to congratulate RaM, GE, Terna, ABB, and all others involved in the project on a job well done. ■