Four years after this magazine was launched, the editors reviewed the latest improvements to industrial boilers, beginning with the Backus furnace (Figure 1). 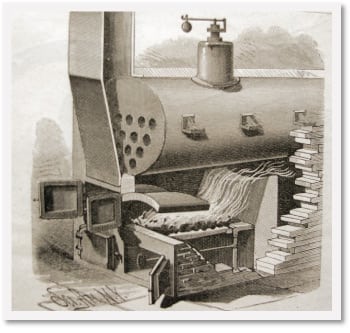 “This furnace is provided with a brick arch placed just back of the fire-doors, that is intended to deflect the currents of air that are admitted through the doors, downward against the fire, instead of allowing them to rise and strike the shell of the boiler, which would chill the combustible gases and render a perfect combustion impossible, from the fact that the water in the boiler is evaporating at a temperature of from 212 to 350 degrees, whereas the gases required some 120 degrees to consume them. This arch becomes highly heated by the fire beneath, so that the moment the fresh air from without strikes the brick, it is heated to so high a temperature that it instantly flashes into flame when it comes in contact with the combustible gases as they rise from the coal.”

This may explain my inability to keep my outdoor BBQ lit and my tendency to char an otherwise good steak.

Today’s computer-assisted design tools and CNC precision manufacturing capabilities may tempt us to discount the excellent manual machining abilities of journeyman craftsmen a century ago. Here’s how POWER reported on the results of an annual inspection of an Allis-Chalmers reciprocating engine one hundred years ago.

“[A]fter nine and a half years of service running 20 hours a day at 80 revolutions per minute, [the inspection of the] engines installed at the power house of the South Side Elevated Railway Company, of Chicago [Figure 2], indicated that the amount of wear in the 64-inch low-pressure cylinders of the 26 and 54 by 48-inch Allis Chalmers cross-compound machines constituting this equipment measured the thickness of one sheet of paper sidewise and two papers top and bottom, using paper sheets of from 0.010 to 0.011 of an inch thick. The measurements were taken on the No. 2 engine, which is one of the four units earliest installed. The cylinder was opened under the direction of the chief engineer. The same steel gage was used which was made when the engines were erected. Furthermore, the original bullrings and packing rings are still in use in this cylinder. 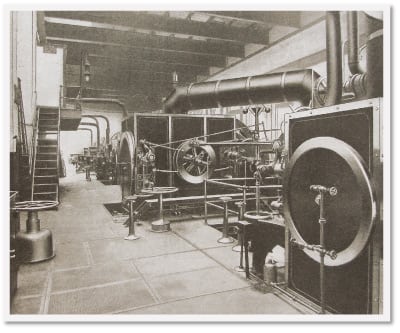 “In this connection it is interesting to note that current has never been off the bus-bars at this station since it was first put into operation.”

I know several plant managers who would be ecstatic to have their plant perform as well.

Selecting coal to improve combustion remained at the top of every plant engineer’s priorities during the Depression years. Very few capital improvement dollars were available, and POWER was where engineers traded secrets about how to squeeze the last few cents out of every pound of steam produced. The magazine was not immune to the effects of the Depression; with this issue, POWER retrenched from a weekly to a larger, monthly magazine.

One interesting case study recounted how the “cost of fuel for producing steam at the Brooklyn Yarn Dye Co. was reduced by eleven cents per 1,000 lb by changing from hand firing to stokers and by using a mixture of bituminous coal and anthracite dust. . . . steam was generated in three hand-fired horizontal-return tubular boilers carrying 120-lb. gage pressure.

“Stack capacity and setting permitted easy installation of overfeed natural draft stokers which would give good economy when burning a mixture of soft coal and anthracite dust, the latter obtainable throughout the year from a coal yard in the vicinity. This method of improvement was adopted and proved to be a good investment.

“Two of the boilers were set 7 ft. from the firing floor to the bottom of the shell which was too low for stoker installation. It was necessary, therefore, to do a little pitting [Figure 3]. Another advantage of the changeover was freedom from complaints by the Smoke Inspector of the Metropolitan Area and ability to hold steam at all loads.” 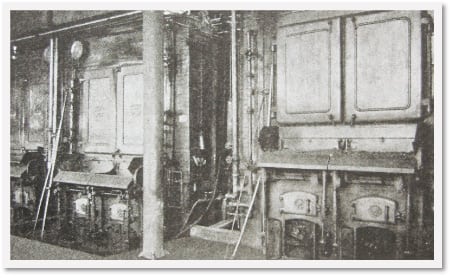 3. The pitting necessary to install two of the stokers is shown at the left.

POWER celebrated its 75th anniversary this month with an omnibus edition numbering more than 700 pages (Figure 4). More than a year in the making, this issue was organized into three parts. Part A began with more than 100 pages of advertisements before readers found special sections such as “The Spectacular Story of Energy” and “75 Years of Power Progress.” One notable element was a 68-page insert called “The Babcock & Wilcox Story 1867ï¿½1957.” 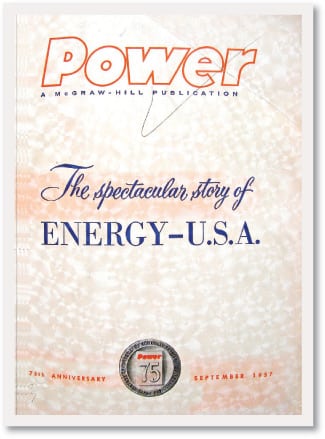 4. Cover of the 1957 POWER magazine celebrating 75 years of publication.

Section B gave the editors free rein to explore the state of the art of various power plant technologies and equipment over nine separate parts and to make predictions about what was to become “tomorrow’s equipment.” Section C included a special report titled “Energy—Key to the Future” that would be tedious for today’s readers, who are thoroughly acquainted with atomic structures and the promise of nuclear energy. The last editorial section covered the history of the magazine, from its humble beginnings in 1882 through its coverage of the power generation industry over three-quarters of a century.

The editor-in-chief opened this special issue with words confirming that no matter how things change, they do remain the same: “Important as energy has been in the growth of the past 75 years, important as it is to our dynamic economy of today, it will be still more important in the years ahead. Fifty years from now, U.S. population will have doubled. [Ed.: Close—the population of the U.S. was about 167 million in 1957. We just passed 300 million earlier this year.] And the resources needed to support this vast population, at ever-higher living standards, will be won only at the cost of vastly greater energy expenditures.

“In the 21st century, energy will be more than ever the key to the needs of mankind, and particularly to that portion of it resident in the United States. For these vast needs, we must increasingly turn to resources as yet virtually untapped—the energy of the sun and of the fissioning nucleus.”