The island Kingdom of Bahrain is unique in the Middle East. Its oil production is minimal, compared with that of its neighbors, even though Bahrain was the first Gulf state to discover oil beneath its sands.

Revenues from oil and gas sales account for about 13% of Bahrain’s income. Even without a large flow of petrodollars, the kingdom has managed to develop perhaps the most diversified economy in the region. It has large shipbuilding and aluminum production plants, one of the region’s busiest airports, and a thriving tourist industry. Many consider the kingdom the international financial services capital of the Middle East. Less surprisingly, Bahrain also refines lots of Saudi Arabian oil and is home to a number of other downstream oil and gas businesses. Two big reasons for Bahrain’s success: It allows 100% foreign ownership of onshore businesses and does not tax corporate or personal income.

Like any expanding economy, Bahrain’s requires increasing amounts of reliable and affordable power. To get it, the kingdom decided three years ago to open up its electricity sector to outside investors. The $500 million, 950-MW Al Ezzel Power Plant (Figure 1) was developed by the Ministry of Finance and National Economy as Bahrain’s first independent generating station. Located in the Hidd industrial area of Muharraq Island, just south of Bahrain International Airport, the plant burns natural gas supplied by Bahrain Petroleum Co. under a long-term contract. 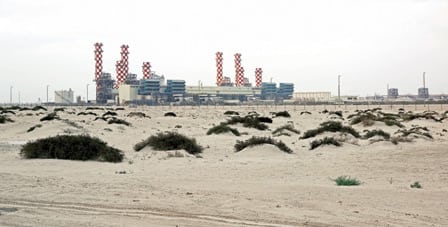 The plant was ordered by Al Ezzel Power Co. (AEPC), which is 45% owned by Suez Energy International, 45% by Gulf Investment Corp., and the remainder by the Pension Fund Commission of the Kingdom of Bahrain. Suez also has a 30% stake in the Hidd Independent Water and Power project.

The commissioning of Al Ezzel this May increased Bahrain’s power generating capacity by about 50%. Nevertheless, over the next 10 years the country will require another 2,000 MW of installed capacity.

AEPC won the right to build, own, and operate the plant on June 27, 2004, in a competition led by the Ministry of Finance that attracted a record number of bids. The company signed a 20-year power-purchase agreement with Bahrain’s Ministry of Electricity and Water a month later. Financial closing of the development deal followed that November.

That month, Siemens Power Generation (www.powergeneration.siemens.com) won the EPC (engineering, procurement, construction) contract to design and build Al Ezzel with a bid reported to have been 320 million euros (Figure 2). Although it is the first new generating plant that Siemens has built in Bahrain in nearly 25 years, Al Ezzel is only one of the company’s many significant power projects in the Gulf and nearby. "In the Middle East as a whole, Siemens is currently working on 17 different power projects with a total capacity of more than 12,000 MW," said Klaus Voges, president of Siemens Power Generation. "We want to continue expanding our position in this key market, and success in Bahrain represents an important step toward achieving that goal." 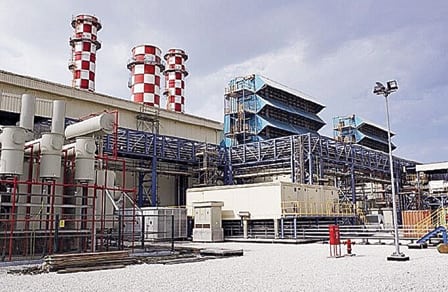 “The plant’s use of state-of-the-art technology to raise its efficiency and reliability and lower its operating and maintenance costs delivers big benefits to Bahrain,” added Guy Rochelle, AEPC’s vice-chairman. “For example, the efficiency of its combined-cycle configuration reduces emissions of air pollutants. Beyond technology, the strong presence of Bahrainis on Al Ezzel’s staff will have less-immediate but nonetheless significant economic benefits. The jobs that the plant and others like it will create will spur demand for power skills training programs both in Bahrain and abroad.”

Running on a fast track

The EPC contract specified a very ambitious, two-phase development schedule: The entire plant had to be ready for commissioning (Figure 3) within 29 months. The 470-MW Phase I (with all four gas turbines operating in simple-cycle mode) was completed on time in April 2006, just ahead of the summer peak in demand. Completion of Phase II in May 2007 added another 480 MW. 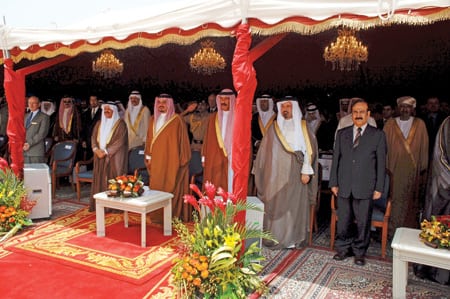 Under its EPC contract, Siemens supplied four SGT5-2000E combustion turbine-generators equipped with dry, low-NOx burners, two steam turbine-generator sets, and all electrical and instrumentation and control systems. The plant controls are based on Siemens’ Teleperm XP system, which last year was renamed the SPPA-T2000. The owner’s engineer was Tractebel Al Khaleej (www.engineering.tractebel.be/company/1324.htm).

Siemens’ management of the project emphasized safety: There were only two minor lost-time accidents during more than 4.2 million man-hours of work. This safety record is even more impressive if you consider the working conditions and the number of workers on a reasonably tight project site. The average daytime summer high temperature in the region exceeds 100F, and humidity is higher than you’d expect in the desert. The manpower peak on the project reached 1,850 persons in December 2005. Over the course of the three-year project, more than 1,000 workers were on-site on an average day.