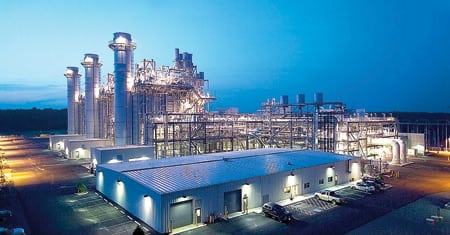 Tenaska likes to begin building a plant with a long-term power-purchase contract in place. For TVGS, that agreement is with Coral Energy, a unit of Royal Dutch/Shell Group. Under the contract, TVGS converts the energy in the fuel delivered by Coral into electricity that Coral then sells on the regional wholesale market.

Gilbert Southern Corp., a subsidiary of Kiewit Corp. (www.kiewit.com), was retained to engineer, procure, and construct (EPC) the plant. Bibb and Associates Inc. (www.bibb.com), another Kiewit subsidiary, provided design, procurement, and field support to Gilbert during construction and start-up, and then handled performance testing. The project broke ground in July 2002, and the plant entered commercial operation on May 1, 2004.

The results of using best operating practices at TVGS are the biggest reason POWER considers it a Top Plant of 2007. Some of the practices were developed at other plants in Tenaska’s 9,346-MW operating portfolio (Figure 2); the rest were brought in from outside sources. 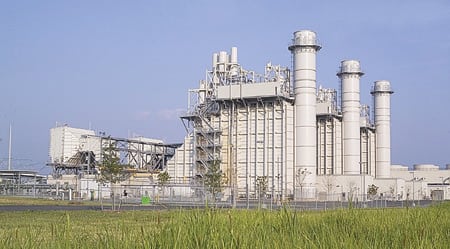 The company’s emphasis on best practices is primarily driven by the need for plants to operate more efficiently and respond more quickly to grid dispatchers’ calls for capacity in deregulated wholesale markets. But it also reflects Tenaska’s realization that well-trained employees, dedicated to excellence, remain the key to any plant’s success.

TVGS has proved that extraordinary results can be produced by a formal and wide-ranging training program (see box) and state-of-the-art management systems working in concert. Operations inevitably improve when operators and technicians apply in the field the best practices they have learned in the classroom.

Ingredients of a winning recipe

Developing the best-practices training program at Tenaska Virginia Generating Station was a two-part process. A needs assessment was followed by the design of the program and the choice of its training media.

Working with generalists and experts in particular technologies and practices, Tenaska’s training managers designed training documents, built practical application scenarios, and created mechanisms for measuring the program’s effectiveness. Because the plant has a staff of just 28, a peer-to-peer approach to training made the most sense. The program both builds trainees’ skills and encourages them to think conceptually—critical assets for any plant operator.

Best practices developed by Tenaska and TVGS personnel and outside sources have been incorporated into their distributed control system screens, which let operators change the plant’s configuration, review system status, and observe the most recent trend analysis. If an operator wants to review a system operating procedure or verify a setpoint, he or she can ask for instruction by touching the “?” symbol on the top task bar.

Following are two examples that highlight the big returns TVGS has gotten from its relatively small investment in best-practices training.

The positive results were achieved by a formal TVGS and Tenaska corporate task force charged with accelerating steam turbine start-up. Members of the task force began by identifying the most-efficient and safest procedures for starting up and shutting down a steam turbine used across Tenaska’s fleet. These best practices then were distilled into a training curriculum.

The efficiencies gained have been considerable. For example, before the training program was put in place, during steam turbine shutdowns the top priority for operators in the TVGS control room (Figure 3) was minimizing fuel usage during the next start-up, which they did by maintaining maximum design steam system temperature and pressure. Now, thanks to procedures that the operations team helped develop, they can do that and much more. Trained in the theory and practices of steam turbine start-up, the operators are knowledgeable enough to tweak the start-up sequence to improve the time from shutdown to minimum load. The 25% reduction in average steam turbine start-up time has produced significant economic benefits. The cost of fuel needed per start-up is less. Because plants that start up faster are more likely to be dispatched, the savings on fuel multiply as the number of start-ups increases, setting up a virtuous circle. 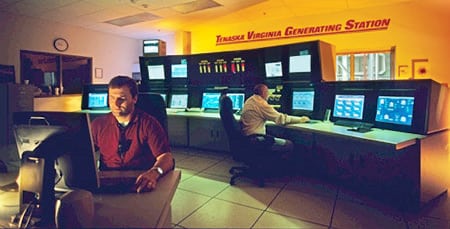 3. No reruns here. At the heart of the TVGS control room is a distributed control system with all the bells and whistles that monitors key plant variables and sequences operations. Courtesy: TVGS

Real-time response using AGC. Implementing best practices at TVGS also has allowed the plant to respond to calls for changes in dispatch in five minutes or less. Plant management realized that the best way to achieve this responsiveness was to develop an automatic generation control (AGC) system covering all plant load ranges and options for configuring its combined-cycle gas turbines.

To work, the AGC system would have to limit the rate at which individual gas turbine load setpoints can change, as a function of the number of turbines, how they are operating, and whether their HRSGs’ duct burners are being used. Developing the rate limits posed three challenges: determining the output of each gas turbine at a given setpoint, finding a way to send that value to the turbine’s remote control system, and writing algorithms for automatically starting and stopping duct burners.

One result of the AGC system development effort: a distributed control system (DCS) screen with which control room operators can interact to change the configuration and firing of individual gas turbine/HRSG units, thereby making the overall plant more nimble. If they choose not to intervene, operators can use the DCS to monitor whether the plant is operating correctly in response to the dispatch signal. The dispatch signal can change every five minutes or less, and TVGS operations must track its level closely.

Another reason that POWER considers TVGS a Top Plant is its excellent relationship with the local community. As one example, management of more than 450 acres of its 559-acre site is being conducted under a permanent conservation program approved by Fluvanna County. The program is part of a Forest Stewardship Plan designed to ensure the presence of a healthy and growing stand of trees on site property.

Employees’ participation in local activities increases a plant’s value to the community in which it operates. At TVGS, many plant employees are actively involved in community organizations, often as leaders. For the employees, volunteering boosts both their self-esteem and esprit de corps with colleagues. For TVGS, the employees’ participation has improved public perception of the plant and the need for it.

Following are the details of some of the activities in which TVGS and its employees participate:

TVGS has operated for the past three years without any notice of violations of its permits. Its success can be attributed to the drive for excellence that best-practices training has instilled in the plant’s permanent staff of 28.

The training program has given employees new skills and new opportunities, improved their job satisfaction and morale, and made them more valuable to Tenaska. Staff members are very dedicated to their work and each one has a can-do attitude (Figure 4). 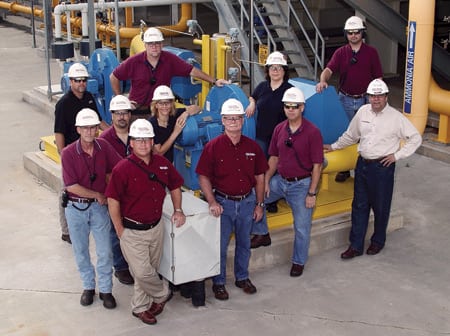 Best-practices training has enabled every employee of TVGS to play a larger role in making TVGS a lower-cost plant and one that is faster on its feet. It’s not only fulfilling, but also fun, to be part of a plant that works so well.