Given the relatively long product life cycles in this industry, tracking the progress of a new gas turbine from its design through testing and first installation takes endurance. But in the case of General Electric’s LMS100, following the maturation is worth it because the machine’s many innovations reflect significant changes in the dispatching flexibility required of today’s gas-fired peaking plants.

One feature of the LMS that immediately gets your attention is the ability to synchronize its entire 100-MW output from a cold start in only 10 minutes. Another is its very low heat rate of about 7,500 Btu/kWh, which makes the unit suitable for providing spinning reserve without generating excessive pollution during start-up. Need to reduce power? That’s no problem, because the heat rate remains fairly constant as output is ratcheted down toward half-load—every resource planner’s dream.

GE Power Systems added the LMS100 to its stable of gas turbine-generators late in 2003 to address growing demand for efficient, mid-range (80 MW to 160 MW) peaking capacity. GE answered the need by carefully mixing and matching the best parts of its aeroderivative and industrial machines.

New block on the skids

In the March 2004 issue of POWER, three months after the introduction of the LM100 (Figure 1), we described it as follows: "[Its] low-pressure (LP) compressor has exactly the same parts as the first six sections of the heavy-duty LP compressor in the MS6001FA power generation workhorse. But the technologies used in its core—the high-pressure (HP) compressor, combustor, and HP turbine—first proved themselves in GE’s LM aeroderivative products descended from the CF6-class aircraft engine. But not everything in the LMS is ‘something borrowed.’ Its two-stage intermediate-pressure (IP) turbine and five-stage power turbine are based on the latest GE aeroderivative technology, and the latter was designed specifically for the LMS100." 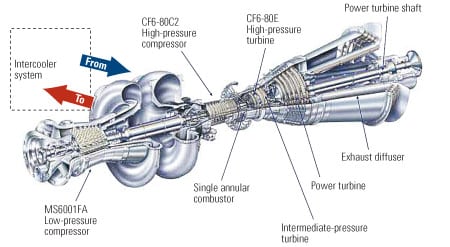 It would be a huge oversimplification, however, to consider the LMS100 the result of checking off parts lists, Chinese menu–style. For example, the systems engineering needed to integrate disparate turbine components with off-engine intercooling technology was immense. But in this case, the end justified the means: a nimble gas turbine able to instantly respond to the needs of a dispatcher with a thermal efficiency far exceeding that of a typical steam plant. Even at 50% turndown, the LMS100 is still nearly 40% efficient—better than most gas turbines can achieve at full power (Table 1).

Furthermore, the LMS100’s low hot-day lapse rate eliminates the need for inlet conditioning and lowers the system’s operating and ancillary capital costs. Whatever your product’s performance and environmental requirements, there seems to be a configuration of the LMS100 to satisfy them (Table 2).

Basin Electric Power Cooperative (BEPC) took delivery of the first LMS100 off the production line in late 2005 to anchor its new Groton Generating Station in South Dakota (Figure 2). Basin Electric (www.basinelectric.com) is one of the largest electric generation and transmission cooperatives in the U.S. Its core business is generating electricity and delivering it wholesale to 124 member systems that serve about 2.5 million consumers in nine states: North Dakota, South Dakota, Montana, Wyoming, Minnesota, Nebraska, Iowa, Colorado, and New Mexico. Groton Station was built as a mid-load resource, to help meet the member systems’ growing demand for summer and winter peaking power. 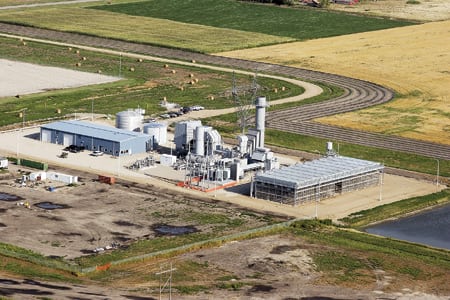 Site preparation at Groton began on August 1, 2005. Four months later, the first production LMS100 left GE’s Jacintoport factory near Houston for a barge trip down the Houston Ship Channel and up the Mississippi River into Minnesota. From there, it was trucked to the project site. Following the unit’s first firing on April 19, 2006, plant commissioning took just two months. On July 1, 2006, Groton Station was placed in commercial service following successful demonstrations of its synchronous condenser’s operation and tests of its output, heat rate, and emission levels.

Paul Sukut, a senior VP and the deputy general manager of Basin Electric, emphasized at the September 21 plant dedication that the co-op will continue to rely heavily on Groton Station to meet its members’ growing need for power. "[Doing so] is so important that our board has authorized development of a second unit here, to be ready by 2008," he said (see box).

In January 2007, Basin Electric Power Cooperative announced its intention to install a second LMS100 gas turbine at Groton Generating Station by the end of this year. The second unit, which will be a duplicate of the first, but without the synchronous clutch, is scheduled to be operational in June 2008.

“This second order builds on the success of our first LMS100 installation and Basin Electric’s confidence in GE’s technology and service,” said Dr. Charles (Chip) Blankenship, general manager of GE Energy’s aeroderivative division. “We are pleased to continue our strong relationship with Basin Electric and its Groton power plant and to further help meet the increasing needs of the co-op’s customers.”

According to Dick Shaffer, a mechanical engineering supervisor and project coordinator at Basin Electric, the last permit needed before construction of the second unit could begin—a Finding of No Significant Impact—was received on April 26. “Construction was delayed until early June due to wet conditions in the area, but now that things have dried up a bit, we’re well under way,” Shaffer said.

The natural gas that Groton Station burns comes from the Great Plains Synfuels Plant near Beulah, N.D. Still the only commercial-scale coal gasification plant in the U.S., it is owned and operated by Dakota Gasification Co., a subsidiary of BEPC. The gas is transported from North Dakota to South Dakota by the Northern Border pipeline, and then to the Groton plant by a 12-mile-long tap. Groton’s output is delivered to an existing substation operated by the Western Area Power Administration (WAPA), the unit’s dispatch agent.

The LMS100 at Groton Station is a "PA" model (with a single annular combustor) configured for water injection for NOx control. Although the unit also can burn oil, Groton apparently has no immediate plans to do so, based on the absence of an on-site fuel oil tank. About 75 gal/min of water taken from an underground potable water pipeline near the project site meets the needs of the water-injection system and the turbine’s evaporative cooler.

One of the keys to the excellent part-load efficiency of the LMS100 is its intercooler. It increases the turbine’s efficiency by pre-cooling the air supply for the high-pressure compressor. Thermal Engineering International (USA) Inc., a subsidiary of Babcock Power Inc. (www.babcockpower.com), designed and supplied the intercooler. Its shell and internals were made entirely of stainless steel to combat corrosion. Meanwhile, the unit’s design itself minimizes transport of foreign objects into the turbine’s high-pressure compressor and combustion sections (Figure 3). 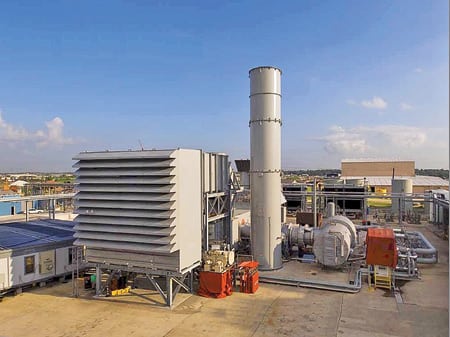 The design of the overall gas turbine plant produces flexibilities that steam plant operators can only dream of. A single-shaft machine, the LMS100 is equipped with a synchronous clutch between the hot-end output flange and the generator shaft flange. Engaging it enables Groton operators to provide VAR (volt-amperes reactive) support to WAPA when required. The clutch further increases the unit’s operating flexibility by allowing the turbine to be decoupled from the generator while operating at idle speed, after the unit has been synchronized to the grid. The turbine then can be accelerated to produce more power by engaging the clutch and generator at synchronous speed (there is no gearbox).

Redundancy was carefully engineered into the design of the gas turbine controls. The Mark VIe TMR (triple modular redundant) control system uses triplex sensors that enable true "voting" logic. Each of the three signals is routed to its own I/O block, eliminating single-point failure modes. Each I/O block also communicates with multiple control processes through two independent networks. As you might guess, each block is powered by two separate uninterruptible power supplies that keep the control system running if AC power is lost.

Redundancy in the design of the package auxiliaries also was well thought-out. As one example, the mineral lube oil and turbine hydraulic systems include redundant AC pumps with a backup DC pump. In addition, all fluid filter systems are duplex, the intercooler uses dual 100%-duty circulation pumps, and ventilation of the turbine enclosure is by redundant fans. GE has set the following very ambitious targets for a "mature" LMS100 package: 99.2% reliability and 97.1% availability. Both appear achievable: the "Entry into Service" (EIS) numbers for the first packages were within one or two percentage points of the mature targets.

According to Dick Shaffer, a mechanical engineering supervisor and project coordinator at Basin Electric, the building, commissioning, and start-up of Groton Generating Station had the normal complement of expected and unexpected difficulties. "Because this was the first commercial LMS100 installation ever, we knew there would be some problems we’d have to work through.

“One of the first was an abnormally high water table, caused by heavy rainfalls, when the foundation was poured. We also forgot to install a few pipes, conduits, and cables here and there, the result of drawing revisions. A later problem took the form of ruptured tubes in the intercooler; when we took delivery of it in February 2005, there was water trapped inside.

“Finally, the triple redundancy designed into critical instruments meant that it took three times as long to calibrate them. Making matters worse, the control system is extremely sophisticated and must communicate with several offsite entities, such as GE Cincinnati and Houston, and Basin Electric’s Leland Olds Station and headquarters. Other than those site-specific issues, however, I’d have to say that this project wasn’t much more difficult than a project of similar type and size.

“It’s a testament to the skill of our commissioning team [Figure 4] that during its first year of operation the LMS100 performed very well, considering it’s serial number one. As for the unforeseen operational issues that have naturally arisen, GE has been very diligent about resolving them. I’m certain that the company is already applying the lessons learned at Groton to its design of next-generation models of the LMS100.” 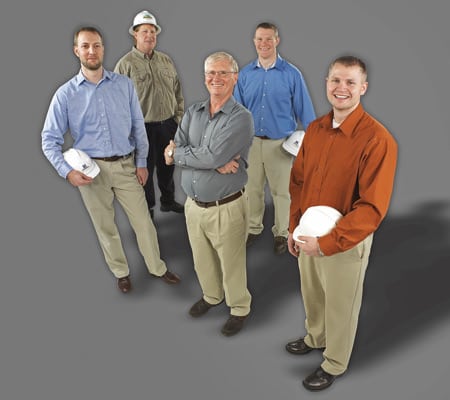 At press time, Groton Station plant had logged more than 303 starts and 991.1 hours of operation. Its starting reliability has been an excellent 75.2% since the resolution of an early clutch vibration problem. The plant is expected to operate at an average 10% capacity factor, running a few days a week during the winter and a bit more in peaking mode during summer months. This July, the plant ran 16 days.

Jeff Nelson, general manager of East River Electric Power Cooperative, a BEPC member, said during the plant’s dedication ceremony that Groton Station is one result of "the late-1950s vision that led to the formation of Basin Electric to supplement the federal power then available in the upper Great Plains. As it turned out, BEPC launched rural electrification in the Dakotas. Then, many doubted that rural folks would be able to put together a power supply network like we now have and manage their own energy future. Let me tell you: the doubters were flat wrong."

Nelson went on to say, "Groton Station joins what is already a remarkable fleet of power plants whose sole purpose is to make electricity secure and affordable to rural customers in the upper Great Plains. It’s BEPC’s and our first priority, and one that we continue to focus on."