WorleyParsons has recently been involved in various cogeneration plant studies and projects for district heating, refinery upgrades, and enhanced oil recovery (EOR) applications. In all of them, balancing thermal and power generation was central to optimizing overall plant economics.

In addition to economics, a number of significant design constraints and operational issues must be addressed if a plant is to simultaneously deal with variations in electricity and thermal demand. We have found that the key to success is to systematically evaluate the entire operating regime while assessing potential mitigating options. That is especially the case for combined-cycle cogeneration plants powered in part by midsize or large frame gas turbines.

For the purposes of this article, we define cogeneration as the simultaneous production of electrical and thermal energy from a single fuel source. The thermal energy, either in the form of steam, hot water, or another heating medium, is typically used for district or process heating and/or cooling. (In Europe, these sources of district heating are called combined heat and power plants.)

In the U.S., cogeneration has a history almost as long as standalone power generation. Most early cogen plants were built by factories that needed both power and steam. With the rise of the central station early in the 20th century, most of these factories found that they could buy electricity more cheaply from their local utility than by generating it themselves. As a result, the overall economics of independent plants that stopped or cut back on private power production suffered. That would not have been the case had utilities connected the private plants to their grids and paid for the generation. But no law forced the utilities to do that, so most didn’t, to improve their own bottom lines.

Purpa began losing steam in the early 1990s when lucrative power-purchase contracts began to expire. Another nail in its coffin was the Energy Policy Act of 1992, which mandated open access to utility grids, creating a huge market for self-generators. Soon afterward, many states stopped insisting that their utilities buy power from developers of non-utility power projects. Although this represented a setback for cogeneration in the U.S., the scheme lost no momentum in other developed countries, where fuel costs more and governments continue to provide incentives to cogenerators. To complete the story, the Energy Policy Act of 2005 added five new standards to Purpa related to interconnection policies and net metering, among others (www.oe.energy.gov/purpa.htm).

Designing a cogeneration plant requires selection of the most economic combination of equipment from among the many options available. The technology is usually chosen based on the energy forms required by the user and may include a conventional boiler, internal combustion engines, and combustion turbines. Two technical factors that play an important role in determining the plant configuration are the available fuel and the ratio of heat demand to power demand.

For solid fuels, the choice is typically limited to conventional boiler systems. For liquid and gaseous fuels, both internal combustion engines and gas turbines are suitable. However, the useful heat to power ratio of a gas turbineï¿½based system is about three to four times greater than that of an internal combustion engine-based system. For this reason, gas turbines are usually specified when thermal demand is relatively high (Figure 1).

In a modern gas turbine–based combined-cycle power plant, about half of the fuel’s latent heat is lost in the condenser and through the stack. However, in a cogeneration plant the heat that is wasted in the condenser of a combined cycle is used effectively by the host facility, improving the plant’s thermal (or fuel use) efficiency. Depending upon the system, a cogeneration plant can be considered 80% to 90% efficient by this measure (Figure 2). 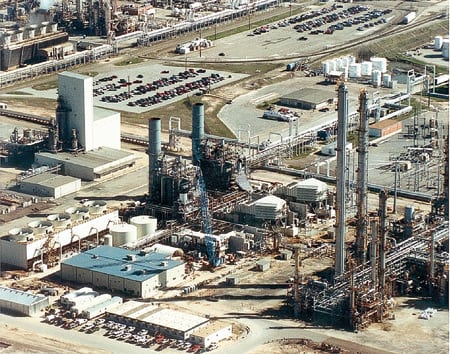 Operating scenarios for a combined-cycle cogeneration system vary significantly, depending on whether it is "electric primary" or "thermal primary." Also, it may be necessary to hold one form of energy production constant while the other varies. Another practical consideration is how rapidly the heat rate of the chosen simple-cycle gas turbine increases at partial load. The plant’s operating profile must be evaluated to ensure proper selection of the prime movers, safe and efficient operation of the plant, and delivery of both forms of energy.

WorleyParsons has designed numerous combined-cycle cogen plants of both primary varieties. Each presents its own unique design challenges.

Electric primary plants may be required to dispatch contracted power irrespective of the thermal demand. Their design becomes more challenging when the plant needs to operate at partial load to comply with the dispatch requirements while satisfying thermal demand. Operation of thermal primary plants is very different because the electricity they produce is considered a by-product. Yet their design challenges are similar to those of electric primary plants, particularly when the electricity generated cannot be economically dispatched.

It is difficult to generalize about guidelines for specifying a cogeneration system’s configuration and evaluating its performance. Nevertheless, there are a number of fundamental design issues that should be of interest to a potential developer or operator of any combined-cycle cogeneration facility. Following is a checklist of a dozen items that should be considered during the design of any system of that type:

Guidelines are helpful, but case studies make the concepts and application details clear. Following are three examples from Worley Parsons project files that will get you pointed in the right direction when doing your own system evaluations. Of course, economic evaluations are based on electric rates, fuel costs, and installed plant costs, so the same analysis may result in a different set of operating profiles for your location.

Case study No. 1. A 500-MW cogeneration plant—configured 2×1 with F-class gas turbines and a two-pressure, non-reheat extraction/condensing steam turbine—supplies steam for district heating and cooling. The steam demand varies from about 100,000 lb/hr to 1,500,000 lb/hr. Two operating scenarios were evaluated in the context of this highly variable steam demand:

Case study No. 2. Another 500-MW cogeneration plant has the same configuration and equipment as the previous case study, but it supplies a process plant. The cogen plant was designed for partial load supplemental firing of the HRSGs. If steam demand were to exceed the level that could safely be extracted from the steam turbine, main (high-pressure) steam would be used to meet it through a pressure-reducing desuperheating station.

Case study No. 3. A 50-MW cogeneration plant with a 25-MW gas turbine, an HRSG, and a 25-MW backpressure steam turbine supplies steam to a refinery. The plant’s power demand is fairly steady. The HRSG can be fresh airï¿½fired, operated with fresh air augmentation, or fired by supplementary fuel.

To maximize the steam production of this plant, the HRSG would first be operated with supplementary firing and then with fresh air augmentation. If a further increase in steam supply were needed, auxiliary boilers could be brought on-line. In fresh airï¿½only firing mode, the HRSG will produce steam when the gas turbine is out of service.

—Andrew M. Donaldson is director of generation projects for WorleyParsons, a provider of professional services to the electric power industry. He can be reached at 610-855-2645 or andy.donaldson@worleyparsons.com. Kajal K. Mukherjee is an engineering technical director at the firm; he can be reached at 610-855-2632 or kajal.k.mukherjee@worleyparsons.com.