Laser-induced breakdown spectroscopy is starting to light the way for power plant operators who want to reduce coal ash deposition in their boilers.

The most significant ash-related problem in coal-fired power plants is deposition, according to Steam, the authoritative work published by the Babcock & Wilcox Co. During the combustion process, coal ash can be released in a molten fluid or sticky plastic state. A portion of the ash, which is not cooled quickly to a dry solid state, impacts on and adheres to the furnace walls and other heating surfaces; this phenomenon is commonly referred to as slagging. Because such large total quantities of ash are involved, even slagging created by a small fraction of the total ash can seriously affect with boiler operation.

Specifically, slagging occurs when coal ash accumulates, at high temperatures, outside the tubes that carry steam inside a power plant boiler. Slagging reduces heat transfer from the flue gas to the steam tubes and decreases a plant’s efficiency. In extreme cases slagging can require a boiler to be shut down while heat transfer surfaces are cleaned or repaired. According to a 2007 report by the Electric Power Research Institute, slagging and associated problems cost U.S. coal-fired power plants approximately $2.4 billion each year.

The variability of ash behavior is one of the biggest problems for boiler designers and operators. Although boilers are often designed to burn a wide range of coals satisfactorily, no one unit can perform equally well with all types of coal.

Recently, a new technology has been developed to assist power plant personnel in dealing with ash-related challenges. During the past two years, Lehigh University’s Energy Research Center (ERC) has worked with the Energy Research Co. (ERCo) of Staten Island, N.Y., in developing an optical technology that will allow power plant operators to make rapid adjustments to prevent boiler slagging and fouling problems (Figure 1). The project was funded by the U.S. Department of Energy’s (DOE’s) State Technologies Advancement Collaborative (STAC) program, which was managed by the New York State Energy Research and Development Authority (NYSERDA) and a Phase I Small Business Innovation Research program from the DOE’s National Energy Technology Laboratory. 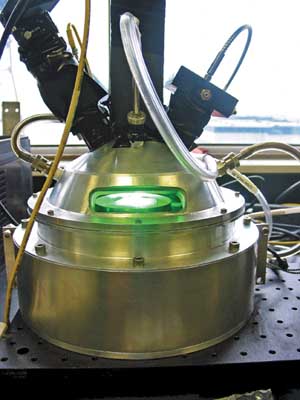 During the past 12 months, the price of coal has almost doubled, for a variety of reasons. Worldwide demand for coal is growing sharply. Bad weather has hampered production in Australia and China. Shipping problems have slowed exports from Australia and South Africa. Because coal-fired power plants produce half the electricity in the U.S., the spike in prices has increased utility bills in some states, just as consumers already are coping with rising living costs and a turbulent U.S. economy. Those rising costs are forcing plant operators to use lower-cost — often lower-quality — coal.

Coal contains up to 10 component elements, including iron, potassium, sodium, and calcium. The proportion of these different elements varies from one coal mine to the next and even among different seams from the same mine. These elements affect ash fusion temperature, as some mineral compositions are more susceptible than others to high-temperature slagging.

"A ship or cargo can deliver 100,000 tons of coal at a time to a plant," said Dr. Carlos E. Romero, associate director and principal research scientist at the ERC, in a recently released statement. "Even if all of the coal comes from the same mine, it can come from different seams within the same mine, with each seam producing coal with a different composition."

"These difficulties are compounded when coal comes from different countries, which is becoming the case more and more as rising costs force plant operators to buy coal on the spot market to get the cheapest price," he said.

The problems addressed by LIBS, according to Romero, have been aggravated by changes in coal-buying patterns triggered by coal’s growing cost. However, he thinks rising prices are leading to one positive development: "The climbing coal costs are also giving power plant owners an incentive to innovate," he said.

LIBS is an advanced chemical analysis technique that has found applications in a range of areas where rapid, in-situ, remote, and semi-quantitative analysis of chemical composition is needed. The technique in its essential form is quite simple. Laser light is used to ionize a small portion of the analyte, and the spectral emission (characteristic of the electronic energy levels) from the species in the resulting plasma is collected to determine the concentration of chemical constituents. By focusing light from the laser to a small spot, highly localized chemical analysis can be performed.

In particular, the LIBS system developed to analyze the chemical properties of coal uses a pulsating laser with two frequencies, one infrared and one visible light. The laser vaporizes a sample, resulting in a distinct elemental signature. From these data, a newly developed software package containing artificial neural network (ANN) models estimates ash fusion temperature and predicts coal slagging potential.

In their lab and site tests, the researchers experimented with 16 different coals from the U.S., Indonesia, Russia, and South America.

Traditional techniques for measuring coal composition and ash fusion temperature require operators to remove a sample from a boiler and test it in a lab, which can take up to three days. LIBS provides instantaneous data without interrupting the process.

Power plant operators also have the option of taking the measurements with a nuclear analyzer that uses gamma rays. But the nuclear analyzer has a large footprint, Romero explained, and is potentially hazardous, whereas LIBS is the size of a table top and is safe to use.

Recently, the performance of the LIBS system was verified in lab experiments and then the system was set up at Dominion’s Brayton Point Power Station, a 1,150-MW coal-fired power plant in Somerset, Mass. (Figure 2) to be tested in a real-world setting. The project had two goals: to demonstrate the feasibility of LIBS to measure coal ash composition and to predict coal slagging potential via ANN models based on LIBS emission intensity measurement. The STAC program supported this project, which was managed by NYSERDA. 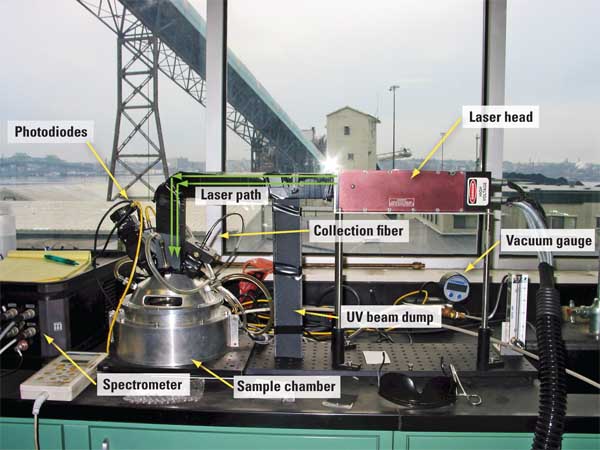 As part of this project, a LIBS measurement system was developed and integrated at the site. The system was first tested in the laboratory using a broad set of coal samples that included U.S. bituminous and subbituminous, and imported fuels. ANN models were developed to relate the elemental spectra, measured by the LIBS system, to the initial ash deformation temperatures under reducing conditions. Using only LIBS raw spectra eliminated the need to calibrate the LIBS system or to construct calibration curves for each element.

The team of ER Co., the ERC, and Brayton Point performed static LIBS measurements. The station burns approximately 400 tons of coal per hour when its units operate at full load. The station’s fuel feedstock is composed of eastern U.S. bituminous coals from Central Appalachia and a variety of South American coals from Colombia and Venezuela.

"The variability in coal feedstock at Brayton Point poses a significant challenge to the station," said Robert De Saro, president of ER Co., in the report, "A Brief Summary of LIBS Test Results at Brayton Point Power Station."

The coal stock’s variability creates serious problems for the station because it has a mineral composition that is susceptible to high-temperature slagging. Consequently, at times, the station needs to take remedial actions to mitigate the impact of slagging fuels, according to De Saro.

Three coals were tested at Brayton Point: Calenturitas (from Colombia), Central Appalachian, and Drummond (from Colombia), in that order. Figure 3 shows the results obtained in terms of the predicted ash initial deformation temperatures. 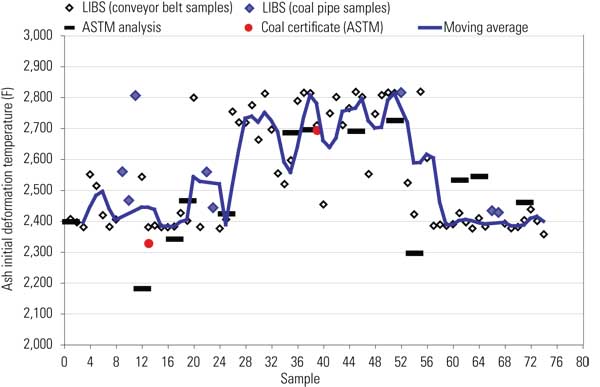 The field results indicate an average LIBS-based prediction for the Calenturitas fusion temperature of 2,434F, versus 2,302F ±133F for the American Society for Testing Materials’ (ASTM) test. The average LIBS-based prediction for Central Appalachian and Drummond coals is 2,722F and 2,432F, respectively. The average value obtained from the ASTM test for Central Appalachian and Drummond is 2,700F ±133F and 2,459F ±133F, respectively. These results demonstrate that LIBS coal analyses performed on an hourly basis would be capable of providing predicted fusion temperature information with enough resolution to alert operators of changes in fuel quality that may affect the operation of coal-fired boilers sensitive to slagging impacts.

In response to fusion temperature data, operators could make minor adjustments to boiler operations, such as increasing combustion air supply. Operators can also decide more intelligently when to blend coals with high and low slagging propensity to alleviate the impact of slagging-intensive coals on the boiler, as well as when to route low-quality coal to boilers in the station that are more fuel-flexible because of their design.

"LIBS would enable us to analyze coal with the same accuracy as a three-day lab test while meeting ASTM tests," said Romero. "Any problem we detect can be corrected in real time."

"This will be a tremendous help to the utility industry," he said. "We get a lot of phone calls from utilities that are struggling because of switched fuels and they have to blend fuels because of slagging."

An advisory software named LIBS Online Slagging Advisor (LOSA) was also developed to demonstrate the merit of a concept where LIBS-derived data would be fed to online software to provide real-time predictions of ash fusion temperatures and indications of the slagging potential of power operations, when ash fusion temperatures (AFT) deviate from target furnace exit gas temperature (FEGT) levels.

The main components of LOSA are: a LIBS-based laser system used to measure the slagging-related coal properties in-situ and in real time, live plant data available through the plant data network, a model based on the artificial neural network for prediction of ash fusion temperatures, and the software interface (Figure 4). 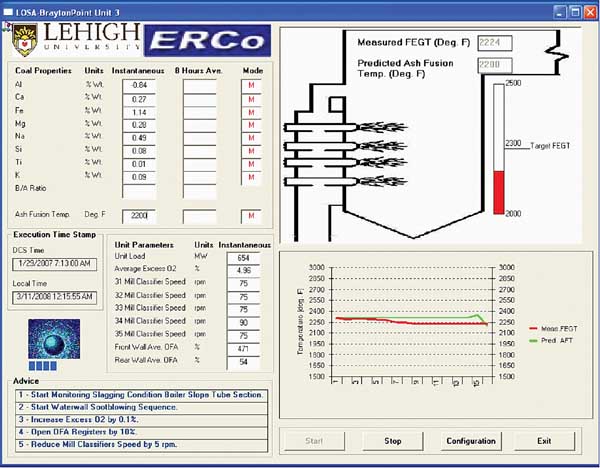 The use of such software will allow boiler operators to better coordinate coal yard operations and adjust boiler control settings to mitigate the impact of slagging on boiler operation. Test experience with different boilers burning coals with a range of compositions has demonstrated that boiler control settings can be manipulated to influence slagging in coal-fired boilers. According to results from prior testing, the key is to maintain FEGTs below the coal ash fusion temperature to minimize the adverse impact of ash conditions on upper furnace slagging.

The unit parameters available for slagging control include excess oxygen (O2), mill classifier speed, vertical coal loading, overfire (OFA) register opening, and others. From parametric testing performed at Brayton Point Unit 3 in this project, it was found that increases in excess O2, opening of the OFA registers, and reduction of the classifier help to reduce FEGT. This information is provided by the software when a prescribed target value for FEGT deviates from the estimated AFT.

The Brayton Point project demonstrated the merit of the LIBS system that produces coal elemental analysis and estimated fusion temperatures. However, further development is needed to equip a LIBS system with an automatic online coal-sampling attachment and to achieve higher accuracy and repeatability, according to Romero.

The researchers have been awarded a second DOE grant to fund development of a commercial prototype of the LIBS system. They hope this next phase will move quickly so the LIBS technology will be available to power plant personnel in the near future.