POWER reported on the latest steam engine technology offered to the power generation market, this time by France. The Boulet engine (Figure 1) was described as a "French horizontal compound condensing receiver engine, having cranks at right angles, cylinders side by side, and live steam jacket. The valves are double slides, giving small waste clearance spaces, and being placed at the side of the cylinders and below their centres, clear the cylinders of water through the exhaust. The condenser and air pump are placed so that the latter is driven directly from the main shaft. The duty reported for a engine of this type, of 52 French horse-power . . . and consumes 1.654 lbs. of coal per hour per horse-power." (Editor: At that time a French horsepower was equal to 542.5 ft lb/sec—only slightly less than our more familiar 550 ft lb/sec.) 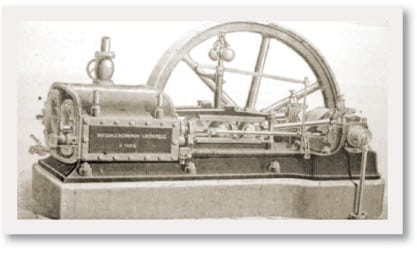 Boiler explosions were routine events in the power industry a century ago. POWER reported on the technical causes of many of the more destructive explosions. But knowing the cause and having the technical analysis tools and an understanding of material science and failure mechanisms are two different things.

Even relatively small boilers have enormous destructive potential. In one case, the boiler was described as "single-riveted, lap-joint, return-tubular, iron boiler, 50 inches in diameter and 12 feet long, containing fifty-eight 3-inch tubes. The front sheet, with dome attached, was blown into some bushes 100 yards away [Figure 2]; the rear sheet was blown rearward 130 yards from the setting, and the central sheet about 10 feet in front of the setting. The tubes were scattered in every direction and the heads were left bare [Figure 3]. 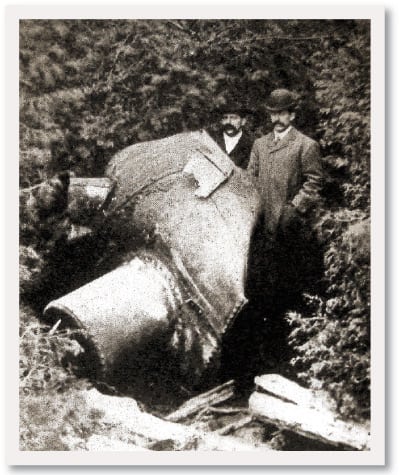 2. A section of this boiler landed in the bushes a hundred yards from the plant. 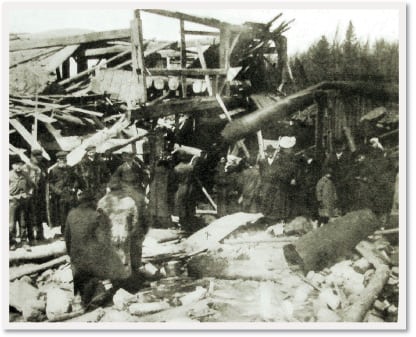 3. The piece marked "X" is the center sheet located after the boiler explosion.

"The boiler was not under inspection, as many in the province are [the plant was located in Conn, Ontario, Canada]. After the explosion two inspectors visited the scene but were unable to agree as to the status of the boiler before the accident. The plates, which were 5/16-inch, did not show any weak spots, however. The only source of water supply was through an injector. The boiler was equipped with a ball-and-lever safety-valve, and a few days before the explosion a new steam gage was put on."

"The old hypothesis [that] the spontaneous flammation of coal is due to the oxidation of the pyrites, can no longer be maintained. Spontaneous ignition would seem rather to be attributable to a direct oxidation of the carbon. In fact, carbon when heated has been found eagerly to absorb oxygen from the air, and this heating effect can be increased until ignition occurs. The part played by moisture in the process has not yet been determined. The physical conditions of the carbon are other factors influencing the process. In connection with a recent investigation of three hundred cases of self-ignition, all kinds of mineral coal apart from anthracite were examined. In most cases the ignited coal was ordinary coal, and less frequently nut coal or coal dust. The higher the layers, the more readily will self-ignition take place. An efficient ventilation by channels in the coal layers and the thermometrical recording of temperatures by long thermometers inserted in the coal have been found to be good preventive measure, while the only available means of extinguishing such fires has been found to be a transfer of the coal and simultaneous flooding.

"Macy’s department store in New York City has been increased more than 100 per cent in floor area during the last ten years and is now the largest store of its kind in the world. It has a floor area of 2,041,355 sq. ft. and occupies practically the whole block bounded by Broadway, Seventh Avenue, 34th and 35th Streets." Macyï¿½s still occupies this very expensive piece of real estate today.

Macy’s, like most large consumers of electricity and steam in New York City at the time, operated its own power house in the building’s basement floors. The store’s system was quite advanced for its time: "Electricity is generated by a combination of steam and diesel engines that gives an economical heat balance and low operating costs. In addition to the power generating plant [Figure 4], two 410-hp. exhaust-steam turbines drive the compressors for the air-conditioning system. With a normal capacity of 4,750 kw., this is one of the largest department store power plants in the world." 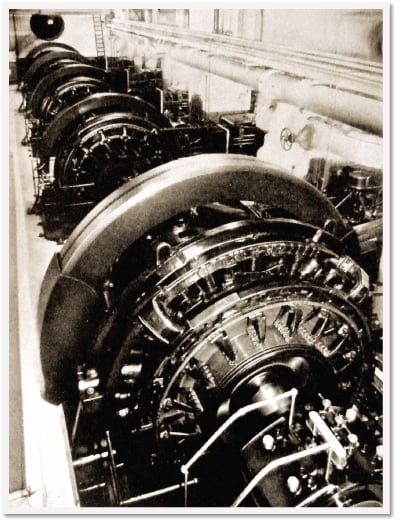 Steam was generated by separate furnaces that had just recently converted from coal to oil firing. "The change-over was based on coal at $6.70 per ton and oil at four cents per gallon, both delivered in the plant’s bunkers."

"Beginning operating in March 1957, the new unit at Philo plant of Ohio Power Co marked a major advance in the trend toward higher throttle steam pressures. This is the first time that a commercially practical unit has operated at a pressure higher than 3206 psia, the critical pressure of steam [Figure 5]. 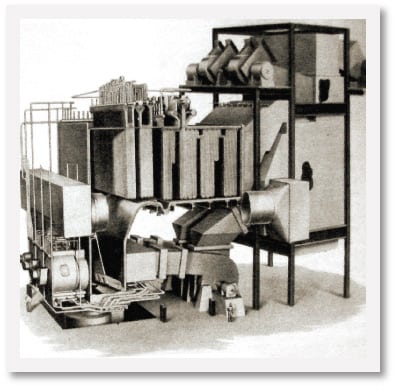 "Other firsts for the unit include the use of double reheat and the first use of steam at a temperature as high as 1150F. This is 50 degrees above the highest temperature previously used for power generation.

"Its capacity is a compromise between the need to (1) limit size as much as possible because of the pioneering involved in any developmental machine, and (2) choose a size large enough to obtain practice experience for future units. Philo No. 6 replaces a 40,000-kw unit dating back to 1924, occupying essentially the same space.

"The new unit is owned by American Gas & Electric Co. The boiler was made by The Babcock & Wilcox Co, the turbine generator by General Electric Co and the boiler-feed pump by DeLaval Steam Turbine Co."