UI was approached by Quaker Oats Co., Cedar Rapids Facility in late 2001 about using oat hulls produced in the food-making process as a source of fuel for UI’s circulating fluidized bed (CFB) boiler. Changing business conditions had caused Quaker to seek alternative outlets for the oat hulls. Because UI has a CFB and was located only 20 miles away, there appeared to be an opportunity to use the hulls as a source of biomass fuel. 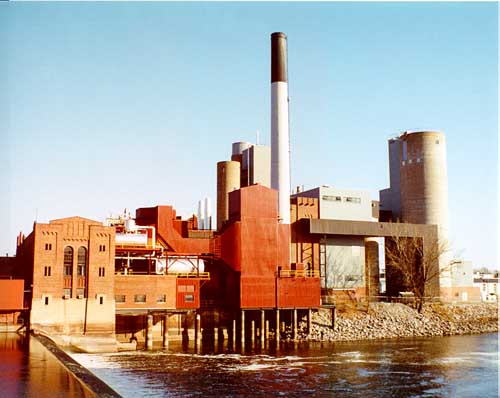 Over the next two years, a team of engineers and staff from UI, Quaker, and Foster Wheeler conducted test burns (see sidebar) and designed and installed a fuel feed system for the oat hulls. In addition, the CFB boiler was permitted to co-fire the oat hulls and coal. Full commercial operation of the project started in 2004.

The UI Power Plant’s partnership with Quaker Oats Co. helps the food manufacturer’s production operation by providing a reliable, stable market for oat hulls. UI benefits because the oat hulls are a renewable energy source and because burning oats hulls enables the university to reduce greenhouse gas emissions and regulated air pollutants from its power plant.

UI operates a combined heat and power facility with two solid fuel boilers, one CFB and one stoker, and two natural gas boilers. The plant has a total capacity of 580,000 lb/hr of 500 psig 750F steam. It supplies steam to 119 campus buildings and to the University of Iowa Hospital and Clinics. Three controlled extraction condensing steam turbines, with a capacity of 24.7 MW, economically and efficiently cogenerate about one-third of the total facility electric power needs.

CFBs are noted for their ability to burn a wide variety of fuels. At UI the CFB was originally designed to burn 100% coal. In the CFB process, air is injected into the furnace with primary air (PA) and secondary air (SA) fans. Air flows from the fans though an air heater, where heat in the exhaust gas is recycled into the combustion process. The PA then flows into the bottom of the combustion chamber and up through a grid floor.

The bed material resembles beach sand with chocolate chips — that is, chunks of unburned coal. While the unit is operating, about 25 to 40 tons of material is in constant circulation in the boiler furnace. The sandlike bed material contains limestone, fuel, and ash. Most of the circulating bed material is limestone that has reacted with the sulfur in the coal.

As the furnace material rises in the furnace it becomes less dense. When it reaches the top of the furnace, it is passed through cyclones, where combustion gases and light ash are separated from the heavier material. All of the heavy material is returned to the bottom of the furnace above the grid floor. Coal is added before it is reinjected into the furnace. The light ash and boiler gases continue through the boiler heat recovery equipment, baghouse filter, induced draft (ID) fan, and boiler stack.

Limestone consumption rate is a function of the fuel’s sulfur content, reactivity of the limestone, and furnace temperatures. Sufficient limestone is injected to ensure that a minimum of 90% of potential SO 2 emissions are removed. One measure of the effectiveness of a CFB furnace is the calcium to sulfur ratio (Ca:S). This is calculated by dividing the number of moles of calcium required to remove 1 mole of sulfur, through the reaction of converting SO 2 to CaSO 4. Another characteristic of CFB furnaces is that NO x emissions will typically increase with increasing limestone consumption.

An oat hull is the outer shell of an oat grain that remains after the soft, protein-containing core has been removed by milling the grain. The oat hull has little protein but does have a heat content of about 7,000 Btu/lb. Coal used in the plant’s CFB boiler has a heat content of about 11,000 Btu/lb. Other significant differences between coal and oat hulls include the percentage of carbon, oxygen, sulfur, and material density. Figure 2 compares the ultimate analysis of oat hulls and CFB coal. 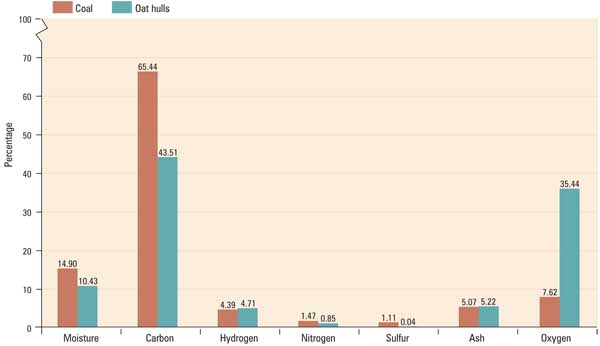 The lower carbon content in oat hulls accounts for a lower heat content (Btu/lb) when compared with coal (44% versus 65%). In addition, oat hulls have a significantly higher percentage of oxygen compared with coal (35% versus 7.4%). Because of the oat hulls’ higher oxygen content, the plant’s boiler combustion control system had to be modified to reduce the amount of combustion air supplied to the furnace as the co-firing rate of oat hulls increased. Another benefit of using oat hulls is they have almost zero sulfur — an improvement over coal.

Oat hulls are about the size of sunflower seeds and lightweight — 7 lb/ft 3, whereas coal is 55 lb/ft 3. The cost of transporting this light material is a major factor in making a project like this economically viable. Fortunately, the Quaker Oats facility is only 20 miles away from the UI Power Plant.

Although the original plan was to co-fire oat hulls and coal, initial material-handling tests demonstrated that the existing coal system was not suitable for blending the two fuels. Additionally, design of the existing coal silos caused the oat hulls to bridge. As a result, they were unable to flow out of the silo. A new silo and separate lean phase pneumatic fuel injection system was designed and installed to convey oat hulls from the silo into the furnace.

Furnace erosion and accelerated wear in the CFB furnace was a concern due to the higher level of silica in oat hull ash. Silica in the oat hulls is over 70%. Since 1996 when the boiler was rebuilt, certain areas of the furnace water walls, low in the furnace and above the refractory line, always had accelerated wear. However, periodic furnace inspections and welding repairs were adequate to maintain satisfactory tube thickness.

Unfortunately, after the oat hull project started, higher water wall wear rates were observed during periodic furnace inspections. However, at this time it has not been determined if the accelerated wear is caused by increased silica levels circulating in the furnace from the oat hull ash or from operating the furnace at higher loads for longer periods of time.

In order to ensure maximum boiler availability, a solution to the accelerated wear was sought that would reduce furnace tube wear rates to acceptable levels. This was accomplished by replacing the lower 20 feet of the furnace water walls with shop-fabricated, metal flame-sprayed panels in the fall of 2005.

Prior to the oat hull project, the CFB typically operated below its maximum continuous rating (MCR). When co-firing coal and oat hulls the CFB now produces the lowest-cost steam and is operated at MCR almost continuously.

In 2003 the existing CFB operating permit stated that only coal could be burned; any other fuel required permission from the issuing agency, the U.S. EPA. In order to process a permit revision allowing oat hulls to be burned in the CFB, the regulatory agencies responsible for UI — the EPA and Iowa Department of Natural Resources — needed combustion emissions data. Because no data were available that demonstrated how CFB emissions change as coal and oat hulls are burned in the same furnace, UI conducted extensive stack testing to characterize these emissions.

As expected, NO x emissions decreased when co-firing oat hulls with coal. Because less mass of sulfur must be removed to meet the 90% SO 2 reduction requirement, less limestone is required. The lower limestone consumption rate also reduced emissions of NO x. A stack test conducted at a 50/50 heat input from oat hulls and coal showed a decrease in NO x emissions.

Stack testing has demonstrated that particulate emissions decrease with increasing oat hull co-firing rates. This result was not anticipated. Because oat hull combustion produces flyash but no bottom ash, there was concern that particulate emissions would increase with rising oat hull firing rates. The additional flyash might also degrade the baghouse’s performance.

In addition to reducing the regulated pollutants, displacing coal by burning a renewable, biomass fuel (oat hulls) reduces CO 2 emissions that would be produced had the displaced coal been burned. Each ton of biomass burned displaces more than a half ton of coal. Burning 1 ton of coal causes 2.5 tons of new CO 2 to go into the atmosphere. CO 2 is a greenhouse gas (GHG) that is believed to make a significant contribution to global warming. Reducing GHG emissions is a key part of UI’s environmental stewardship.

Burning oat hulls does produce CO 2 emissions through carbon combustion. But this carbon became part of the fuel through photosynthesis. Carbon in coal comes from fossil fuel located underground. Though the source of carbon in fossil fuel was originally plant material, it was formed millions of years ago. 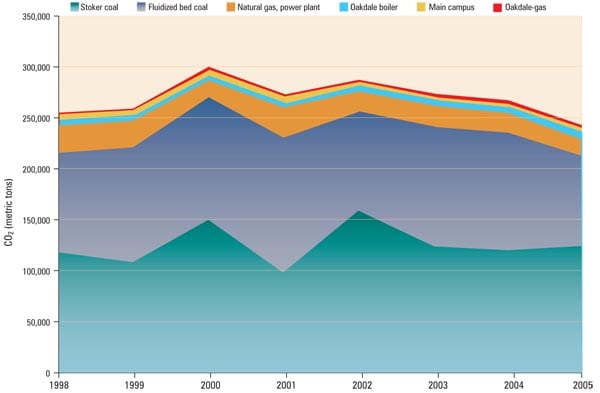