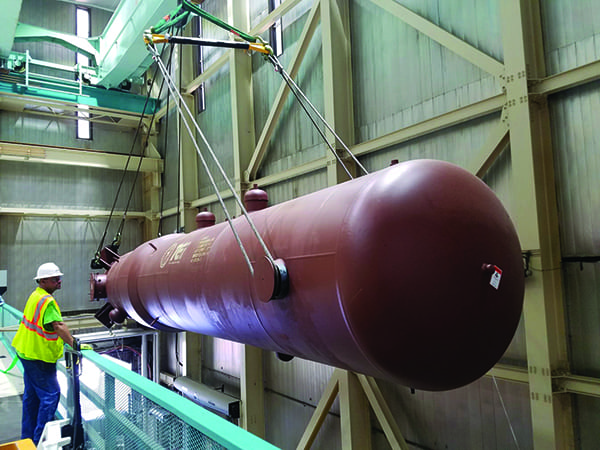 Replacing two 40-year-old feedwater heaters at a plant of Oconee Nuclear Station’s size and age was fated to be a complicated project, but through meticulous modeling and planning, and seamless collaboration, project partners got it done safely in a stunning 12.5 days.(Image courtesy: Day & Zimmermann)

Duke Energy’s Oconee Nuclear Station in Seneca, South Carolina, has been a POWER Top Plant Award winner before. In 2009, the magazine’s editors recognized the 2,554-MW plant, whose three pressurized water reactor units were designed and built in the late 1960s and early 1970s, for efforts to digitize its controls. The 2018 award recognizes the rigorous planning and meticulous project execution to replace Unit 2’s two high-pressure feedwater heaters (FWHs)—critical components as old as the unit itself—while the plant’s other units ran at full power.

As Chris Rickman, project manager at Duke Energy, told POWER in October, the plant’s FWHs serve the important function of pre-heating condensate from condensate pumps to boost the overall heat rate of the steam turbine. “The Unit 2 FWHs were original plant equipment, and they had carbon-steel tubes, but they had reached the end of their service life and we were seeing decreased efficiency on those FWHs,” Rickman said. For these reasons, Duke Energy identified and prioritized projects to replace FWHs at all units with FWHs equipped with stainless steel tubes.

After Duke Energy experienced an issue with an FWH in Unit 1, however, this project at Unit 2 increased in priority. While typical project lifecycles at Duke Energy are 36 months, for this project “we had a little less than 24 months from inception to implementation,” Rickman explained. So after Duke Energy embarked on the process of engineering, it developed the equipment specifications, and then moved through the request for proposal process to select an implementation organization. “This is our first attempt at a managed task project of this size, where Duke Energy had an oversight role, but the implementation was handled by a turn-key contractor from start to finish,” Rickman said.

Duke Energy also contracted engineering, construction, and maintenance firm Day & Zimmermann (D&Z) during the early planning stages—months earlier than it typically does. That was “key for this project,” Rickman said, because it allowed the project team ample time to conduct walkdowns, modeling, and other pre-project activities that helped managers “identify areas in the project schedule where we were able to accelerate the schedule.” 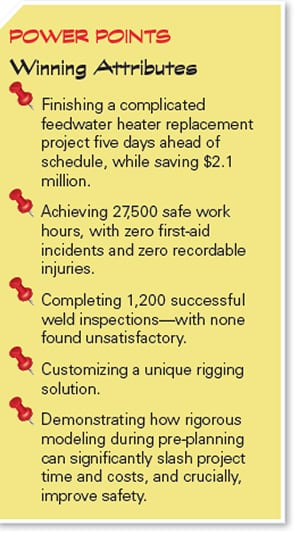 Preparing to Be Precise

The original project timeframe, which began in October 2017, was slated to last 17 days from “cutting the first pipe” to “pipe tight.” It entailed an intricate worklist. First, the team needed to perform welding repairs at four lift trunnions—primary lifting points—whose welds failed nondestructive examination (NDE) visual and penetrant tests, while the FWHs operated at their in-service temperatures of 450F. This required removing a limited amount of insulation and providing direct cooling for welders working close to the scorching heater shells. Then the team needed to remove the 126,000-pound FWHs while leaving their original asbestos insulation intact (Figure 1).

The replacement difficulty was also extensively compounded by the fact that both of the vertically disposed FWHs had been installed in a confined space marred by a 5/8-inch interference clearance of two safety-related cable trays. The space constraints posed not only major equipment obstacles, but it left technicians with little flexibility to maneuver the 24-inch inlet and outlet elbows for fit-up of the newly fabricated replacement FWHs. The position of the pedestal mounting plates also warranted that all 24 3/4-inch bolts align precisely to fit up with the inlet and outlet elbows the first time. Finally, to make the switch, piping would have to be rerouted to other operating systems without disrupting any functions necessary for plant operation. Altogether, it would require more than 700 welds, and 1,200 weld inspections—which the failure of any one could set back the schedule.

Remarkably, the project shaved nearly five days off its original schedule, lasting only 12.5 days—a feat that translated into $2.1 million in savings for the total project, which cost about $17 million. According to Rickman, who noted the team had planned for three days—six shifts—of contingency, it was only possible owing to meticulous planning, and “being able to identify interferences that we worked around through our rigging strategy.”

For Bob Bracall, D&Z director of operations, the project’s success was also predicated on a demonstration of the “power of teamwork.” He noted the project required seamless coordination between Duke Energy, D&Z, and D&Z’s partners, which included experts from specialty welding company Arc Energy Services; heavy-lift and transport firm Engineered Rigging; engineering firm Zachry Engineering; Structural Integrity, which provided the phased-array ultrasonic testing; as well as 3SPACE, a metrology firm. An estimated 82 individuals worked on the project, including eight full-time Duke Energy employees.

The precision the project required was borne from a high-tech approach, both Rickman and Bracall noted. The team began eight months before getting into the field, spending countless pre-outage hours identifying and addressing challenges using a 3-D ACAD solid model custom-developed by Engineered Rigging. The model used laser scanning to create a point cloud for all areas of the workzone, providing exact scaling to identify interferences, clearance dimensions, and obstructions. Animation, meanwhile, allowed project partners to visualize the travel path, the detailed lift plan (and configure exact lift heights), rotation, plane adjustments, and exact areas of closest obstacles to allow placement of spotters. The modeling was also crucial for safety by pinpointing worker placement and allowing the project team to visualize how the work could quickly and safely be completed in high-radiation areas.

“Scanning and modeling is used widely across the industry, but the method we used—we built a fully animated model so you could actually watch the project and the animated model months before we actually did anything in the field—that approach was innovative,” Rickman said. The project also used metrology technology, integrated with misalignment data that was identified before the outage, for detailed mapping of specific bolt-hole alignment. That approach also proved spot-on. “We were able to set those FWHs right down on the 24-inch bolts that holds it to the pedestal,” Rickman said.

Technology was also key for training. During the project, Duke Energy used phased-array weld quality testing on the large-bore, 24-inch condenser lines for the first time, and a comprehensive mock-up of the 24-inch nozzle was used to train welders and validate the phased-array ultrasonic testing process, which further compressed the schedule.

To counter the space constraints, Engineered Rigging’s team of eight in-house engineers also came up with a temporary lift device (TLD), which incorporated two 200-ton capacity computerized strand jacks and eight 50-ton wheel trucks (Figure 2). But because it could be remotely operated (through cameras used to monitor and perform finite movements), and offered an x-, y-, and z-axis of control (through millimeter-measured hydraulic movement), it proved crucial to efforts to lift, remove, and replace each FWH.

“In an effort to reduce schedule and risk, we wanted to be able to lift the FWHs vertically and then place them on a track system so we could safely get them from vertical to horizontal, and the TLD allowed us to gain enough headroom between the ceiling and the [girders] and the height of the FWH to lay it down,” said Rickman. Precision here, too, was key. “If we had used traditional cranes, we’d [have] had to remove a significant amount of interferences, and it would have increased the project schedule. And it allowed us to remove those heaters without taking the [asbestos] insulation off, which would have otherwise required an asbestos abatement project and increased the time, cost, and risk.” Rickman credited D&Z with finding and ensuring the custom-made solution would fit the project’s needs. “It was an approach none of the other parties brought to the table,” he noted.

D&Z’s Bracall noted the replacement was the first major project it did as a team with Duke Energy. “We have done it at other nuclear plants—we’re at 66 other nuclear plants in the country—and we were able to take our lessons learned, our experience, and our resources to make this project at Duke Energy successful,” he said.

But for Bracall, the bigger achievement was safety related. “We had 27,500 safe work hours on this job, which is extremely impressive. We didn’t have first aid on that job within the 12.5 implementation days, which is outstanding,” he said. The team’s performance was as remarkable. “More than 1,200 successful weld inspections—zero unsatisfactory. Everything was 100% successful.”

Rickman agreed. “The integration between the various organizations was impressive. We blended together very well,” he said. “That’s the key takeaway for project success: When you partner up with another company on a project like this, you have to come together and work as one team.” ■