Florida Power & Light Co. (FPL) completed a scheduled refueling and maintenance outage at its St. Lucie Nuclear Power Plant Unit 2 during the fourth quarter of 2007 (Figure 1). But calling it merely a maintenance outage does a disservice to the project team. This was no routine refueling outage. It’s my opinion that this was one of the most ambitious and complex outages ever attempted in the nuclear power industry.

This project also demonstrates how fast a utility can spend millions in capital improvements to keep a nuclear plant in tip-top shape and ready for another 25 years of service.

St. Lucie Nuclear Power Plant is located on Hutchinson Island, about 8 miles southeast of Fort Pierce, along the east coast of southern Florida. It consists of two 829-MW pressurized water reactors, each featuring a freestanding carbon steel containment vessel with a reinforced concrete shield building forming an annular space between the vessel and shield building. Unit 1 entered commercial service in June 1976; Unit 2 followed in August 1983. Both units’ operating licenses were renewed by the Nuclear Regulatory Commission (NRC) in October 2003. The reactors were provided by Combustion Engineering.

A significant amount of work

The outage that earned Top Plant recognition began when Unit 2 was taken off-line Sept. 30, 2007, for the 17th refueling outage since it began commercial operation in 1983. More than 16,500 activities were accomplished during the outage. In addition to routine maintenance and the replacement of one-third of the unit’s 217 uranium fuel assemblies in the reactor core, the centerpiece of the outage work package was replacing the two steam generators and the reactor vessel head. Each steam generator is 63 feet tall, 19 feet in diameter, and weighs close to 500 tons. The reactor vessel head might be thought of as the reactor’s "lid," although it is about 8 feet high, 16 feet in diameter, and weighs more than 70 tons (Figure 2). 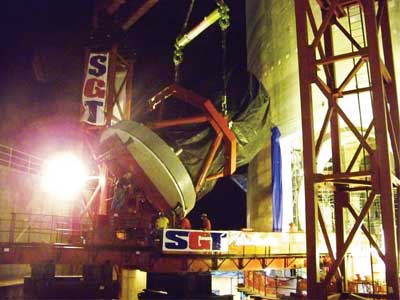 2.    Off with its head. The old reactor vessel head was removed and then upended as it was extricated from the containment building  Courtesy: SGT

The outage also included replacement of one of Unit 2’s four 6,500-horsepower reactor coolant pump motors; an alloy 600 mitigation project that deposited 120 pounds of weld metal on components in the containment area; and modifying the containment sump, a system inside the containment building that is used to collect and filter spilled coolant for reuse in the event of an accident.

The SGT LLC team, a URS Washington Division-AREVA NP joint venture, performed the steam generator (SG) and reactor vessel head replacements within what was an aggressive outage schedule established by FPL for the St. Lucie plant. The work inside the containment was complex but well-choreographed: Every step was carefully considered and integrated into a detailed written schedule prepared by FPL and SGT.

SGT provided project management, planning, engineering, and construction services for the installation of the two replacement steam generators. This included supplying all indirect labor management; direct hire craft labor; subcontractor management; permanent plant materials; miscellaneous equipment, tools, and supplies; and related costs and expenses to support the subcontractors. To support the outage plan, the team used the talents and expertise of employees throughout FPL’s nuclear fleet as well as the skills of more than 2,500 specialized contract workers.

SGT was also responsible for creating a temporary opening in the concrete shield wall and steel containment vessel; heavy rigging; offload and transport of the steam generators and reactor heads; and restoration of the containment building and affected systems to their original design configurations (Figure 3). 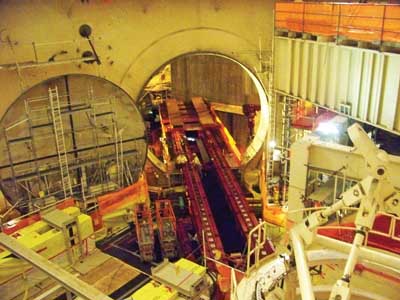 FPL realized the need to keep a successful project team intact after completing its recent Turkey Point Reactor Head Replacement Project, so a core team of SGT and FPL staff remained together for more than four years, working first at Turkey Point, and then at St. Lucie. Both SGT and FPL embraced the integrated project team approach, which blurred the distinction between companies. This teamwork was especially crucial during the implementation phases of the project, when problem-solving occurred seamlessly due to the existing collaborative relationship.

One characteristic of the project team was its spirit of innovation. Team members were willing to adopt new technologies that would reduce labor man-hours expended during the outage. For example, the team adopted the first-of-a-kind use of Netherlands-based Mammoet’s containerized winch system (CWS) crane. The CWS, jointly developed by SGT and Mammoet, was used to lift large components (up to 650 tons) and improve travel speeds of the major component rigging evolutions (Figure 4). Any reduction in travel time results in a critical-path savings to the outage schedule, which was vital to meeting the objectives of schedule adherence and cost certainty. 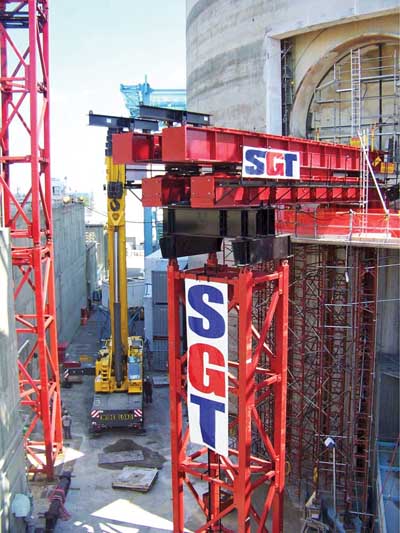 Steam generator replacement projects pose a significant challenge to employee safety, because work is performed in an operating facility with a large variety of potential physical and radiological hazards. These challenges include high-radiation areas, confined spaces, heavy rigging, and hot work in close quarters (Figure 5). To ensure the project’s success, each task was meticulously planned. SGT’s safety-conscious approach has helped set the industry standard for top performance under aggressive project schedules. 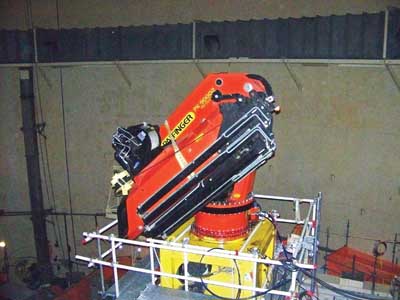 5.    Moving on. A Palfinger crane was also used for heavy lifts of piping and components. Courtesy: SGT

SGT and FPL achieved superior results in all areas of safety, as low as reasonably achievable (ALARA) radiation exposure, and quality. The team’s safety record is attributable to a program that drove the responsibility for safety through all levels of the organization and project. It held all workers accountable for their own safety and the safety of their coworkers. Employee orientation and training addressed personal attitudes toward safety and ensured that all employees attained a sense of ownership of the safety program and culture. The project team members were always aligned in terms of safety performance and behavior expectations.

Team safety achievements include the following:

The construction team identified risk areas and took problem mitigation and elimination measures wherever possible. For example, the team developed innovative solutions to potential steam generator haul route interferences. Doing so was significant, as the time and labor required to dismantle and restore a cask crane for a single potential interference would have cost as much as $360,000. 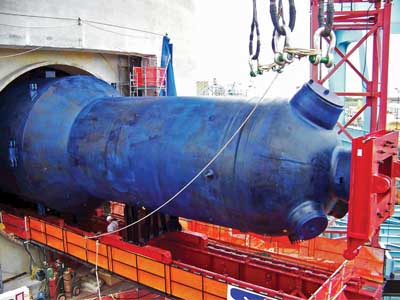 6.     Skid row. The old “B” steam generator was skidded out of the containment building. Courtesy: SGT

The SGT project team utilized a task management approach that empowered each task manager to be a "mini" project manager for an element of the overall project. A comprehensive risk identification and mitigation program was the core of the task plan, and the task manager could identify risks that were then rolled up into an overall project risk assessment to provide for contingency plans and drawdown schedule.

The success achieved on reactor coolant system (RCS) welds (all welds were performed with zero rejectable indications) included the use of a narrow-groove weld joint design and simultaneous ID/OD welding of the RCS hot legs to reduce outage duration. This was the first time SGT had used simultaneous welding of the joint, which saved time on the project’s critical path schedule. SGT achieved first-time weld quality on all large-bore primary and secondary welds through a rigorous welder training and proficiency testing program that the team established. The investment in this program provided for first-time weld quality of the following radiographically tested weld joints: