Replacing equipment inside a nuclear power plant requires careful planning that begins many months before the plant outage. Entergy has adopted advanced modeling and simulation tools that allow engineers to "walk through" the entire outage in a virtual model, thus avoiding unanticipated surprises.

Waterford 3, located about 25 miles west of New Orleans, is one of the dozen nuclear plants owned and/or operated by Entergy Nuclear. The 1,157-MW plant has a two-loop pressurized water reactor that began commercial operation on September 24, 1985. According to Entergy Nuclear, the plant’s cost per unit of electricity produced is one of the lowest in the Entergy system. Data from the Energy Information Administration showed Waterford 3 operated at a capacity factor of 89% during 2008.

As is the case with every operating nuclear plant, upgrades are in order. Entergy plans to replace the two steam generators, reactor vessel closure head, and control element drive mechanisms during an outage scheduled for 2011. The estimated cost of these plant upgrades is approximately $511 million. One important feature of this plant outage is the absolute necessity that every aspect of it be considered in the project plan. To that end, Entergy Nuclear has adopted digital modeling and virtual simulation, combined with scanning inside reactor containment buildings, to do the most thorough and cost-effective job of preparing for the engineering and for planning maintenance tasks.

These simulations are among the first of their kind in the U.S. nuclear power industry, and the potential return on investment using these digital tools is huge. John M. Mahoney, innovations leader for Entergy Corp., sums it up as "another day, another million dollars." Each day of a power plant outage means purchasing about $1 million in replacement power.

With that much money at stake, it is very easy to justify the investment in modeling and simulation technology for maintenance and refurbishment projects. A plant can be brought back online sooner when task sequencing is optimized through better planning. The same is true when potential delays are discovered early, preferably during the planning phase, and avoided when the cost and impact of any changes are minimal.

John Gaertner, tech executive for plant technology at the Electric Power Research Institute, pointed out that "nuclear power plants have excellent process management and plant configuration management. But they achieve it at great cost and with many resources consumed. Creating a virtual plant with scanning and PLM [product lifecycle management] will integrate information systems, visualize and access information, perform logistical and analytical simulations, communicate within plant processes, and interface easily with suppliers, contractors, and other entities."

"Not many innovative technologies come along these days that will change the way engineering is done, the way work plans are developed, and where training can be provided prior to doing work — especially all at once," Mahoney said. The problem is the complexity of the work that must be completed in a two- or three-week outage. For example, refueling a power plant takes more than 2,000 discrete tasks. This involves many different contractors and hundreds of pipe fitters, riggers, nuclear-certified welders, and so on. Few of them have ever been inside Waterford 3’s containment.

Because all U.S. nuclear power plants are at least 20 years old and predate 3-D design tools, it is impossible to find to up-to-date 3-D computer-assisted drawing (CAD) models for these plants. Good 3-D models can be intelligently built from 2-D engineering drawings by using techniques such as laser scanning and sketch-tracing. Until now, nuclear generation owners have planned plant outage work in traditional meetings and conferences using hundreds of paper drawings, project timelines, physical mockups, and other training aids. However, those methods no longer seem cost-effective.

Modeling and simulation tools have been available for some years, but few nuclear power generators have adopted them for outage and overhaul planning. What is unique with this project is Entergy Nuclear’s innovation in combining laser scanning, to prepare the plant "as-built" digital database, with modeling and simulation tools — to plan for this outage project. The resulting 3-D virtualizations also use 2-D engineering drawings, CAD files, and photos of previous modifications. 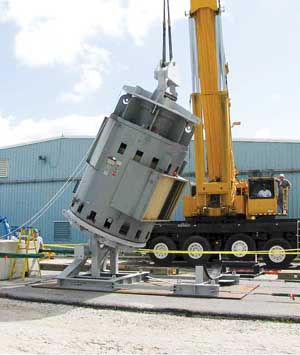 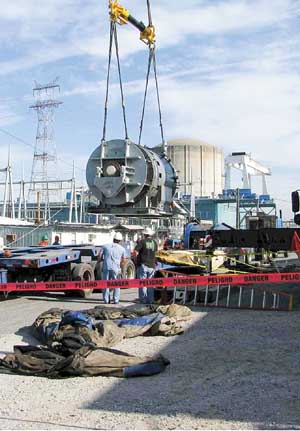 1.    Moving a real pump. In the physical world, a reactor coolant pump motor similar to the one in the Waterford 3 project is taken out of a utility company warehouse (left) and loaded on a flatbed truck (right) for transport to a shop for refurbishing. Courtesy of BCP Engineers & Consultants

These simulation projects were not just theoretical exercises (see first sidebar). The planning that was based on knowledge gained from these simulations is being put to the test as you read this article. In October, Waterford 3 is scheduled to begin a 30-day refueling outage when the RCP motor and ICI thimbles will be replaced, steam generator tubes and the reactor head will be inspected, and other maintenance tasks will be completed as a precursor to the major outage scheduled in 2011. Work on the RCP motor will extend through most of the outage, a projected 25 days. (See the virtual motor removal sequence in the second sidebar.)

The Opportunity to Virtualize and Visualize

John M. Mahoney, innovations leader for Entergy Nuclear, explained that the value of modeling and simulation lie in "their ability to ‘virtualize’ and ‘visualize’ a proposed modification to a plant. These technologies add new and unique opportunities to review options and ‘see’ the effects of the change virtually." This can be done, he added, "while we are planning construction activities and conducting pre-job briefings. Even when a simulation reveals no problems, it still has huge value." Here are some examples:

John M. Mahoney, innovations leader for Entergy Nuclear noted that Waterford 3 managers "have determined that tying their long-range asset replacement planning process to the use of laser scanning and 3-D simulations is an ingenious way to be more efficient and cost-effective in the detailed engineering and project planning of plant life-cycle management." Plant lifecycle management is the power-and-process counterpart to product life-cycle management as it has evolved in engineering design and large-scale manufacturing such as ship and aircraft building.

"The use of this technology during the planning process reduces overall risk and improves scenario planning for any major project," he noted. "Scanning and simulation give the engineers an intelligent model with detailed specifications. Digital data accuracy is within plus or minus a quarter of an inch, measured over dozens of feet, and in some cases an eighth of an inch."

Follow the virtual removal of Waterford 3’s reactor cooling pump in this series of frames taken from the 3-D simulation. 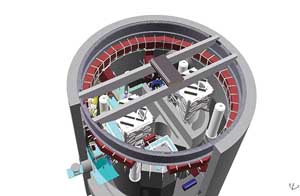 2.    Tight fit. This 3-D model of the Waterford 3 containment building with its roof removed was built in CATIA from Dassault Systèmes. The compact arrangement of the equipment illustrates the challenge in removing a 9,700-hp motor through the access hatch in the containment vessel. Courtesy: Entergy, BCP Engineers & Consultants, and Dassault Systèmes Industry Services 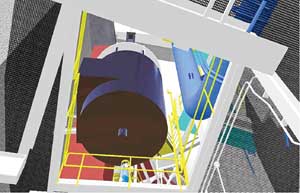 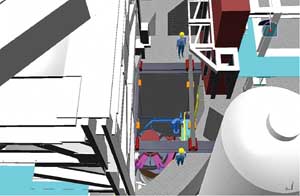 4.    Watch for interferences. One of two interferences detected by modeling and simulating the task in DELMIA is the beam structure between the simulated workers in the yellow hard hats. The motor (brown and pink, lower center) is about 10 feet in diameter and stands about 20 feet tall. Courtesy: Entergy, BCP Engineers & Consultants, and Dassault Systèmes Industry Services 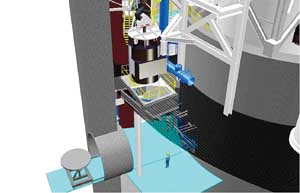 5.    Thread the needle. Here the reactor coolant pump motor is being lowered to the floor of the Waterford 3 reactor containment building through existing structures. The motor will then be removed through the cylindrical port (lower left). Installing the replacement motor follows the same path in reverse. Courtesy: Entergy, BCP Engineers & Consultants, and Dassault Systèmes Industry Services 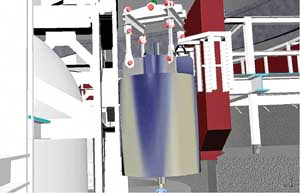 6.    Finding the right path. This side view of the motor lift at Waterford 3 shows the second potential clearance problem in the containment building: the angle of the steel structure just to the right of the hoist. Any unforeseen interference could have added one or even two costly days to the reactor outage. Courtesy: Entergy, BCP Engineers & Consultants, and Dassault Systèmes Industry Services 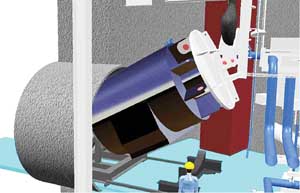 7.    On the way out. Finally, the reactor coolant pump motor is tilted 90 degrees in a special fixture and moved into the cylinder port in the reactor containment building. Courtesy: Entergy, BCP Engineers & Consultants, and Dassault Systèmes Industry Services

Benefits that are even more dramatic are anticipated from modeling and simulation in replacing the steam generators at Waterford 3. "Clearances for the steam generator project are as tight as two inches," Mahoney pointed out. "This means precise laser measurements and a 360-degree view are essential" for project engineers, contractors, and workers.

Mahoney believes combining scanning and modeling with up-to-date planning could take 13 to 15 days (or about 20%) off the old industry-wide average of 78.5 days to replace steam generators.

Laser scanning inside reactor containments is not new in the nuclear power industry, but neither is it in widespread use. (See "Laser Scanning Produces 3-D Plant Database" in the November 2008 issue of POWER for details of how laser scanning plant equipment is used to produce an "as built" 3-D database.) Laser scanning the equipment space is the first step in preparing accurate as-built 3-D models of existing equipment.

The accuracy is the direct result of scanning and photogrammetry. At Waterford 3, this work was done by AREVA NP, Lynchburg, Va., an engineering services unit of French nuclear power company AREVA. "Other utility companies have embraced laser scanning on a few projects, but none are as focused as we are on using it for risk mitigation," Mahoney noted.

"There is great value for power utilities in using DELMIA and PLM tools in general to build an up-to-date, dimensionally exact model of everything inside the containment," said Chris Staubus, general manager, utility services, at BCP Engineers & Consultants, which is a DELMIA and DS business partner for nuclear power. "When we scanned the containment and then modeled and simulated the removal of the RCP motor, we found conflicts between equipment and some structures," he added. The DELMIA simulations and the CATIA model of the containment "showed Waterford 3 management the unforeseen and pointed to ways to plan for these conditions well in advance of the work being performed."

"The arrival of 3-D PLM is very new to the commercial nuclear industry," said Darrel Turner, BCP project manager for Waterford 3. "Much of our ability at BCP to introduce PLM, scanning, and simulation is due to the fact that DS [Dassault Systèmes] offers very effective technologies."

Mahoney cited three examples of how this project will reduce project risk by focusing on ways to make sure all nuclear plant operations stay on schedule and within budget:

Physical Models Are So 1990s

Mahoney predicted that the significantly higher cost of custom-built, full-size mockups — hundreds of thousands of dollars apiece — "will be a major factor driving the use of 3-D virtualization." He also pointed out that mockups do not readily accommodate engineering changes and plant modifications, nor are they easily modified for reuse in other facilities.

"A sheet metal mockup of the motor was made and moved in and out of containment," said Gerald Butts, Waterford 3 project manager when the RCP project started. "But the necessary comfort level of really being able to move the motor was not reached. The 3-D modeling and simulation gave us an extra [reassurance] factor we had to have to start the project."

—Jack Thornton (jackt@mindfeed.com) is a principal in the firm of Mindfeed Marcom.