Fuel delivery systems in PJM Interconnection’s vast footprint can generally withstand an extended period of stress and remain reliable, though extreme scenarios could impact the grid, the nation’s largest system operator concluded in a high-profile study.

PJM, whose system covers 13 states and 65 million people, launched the study this May as the federal government, several states, and other grid operators considered interventions aimed to boost resilience in markets increasingly assailed by disruptions. According to PJM, “Grid operators around the world find themselves contending with new challenges, including a rapidly changing fuel mix, stressed fuel delivery systems, extreme weather, cyberattacks and physical security threats. As a result, the security of the fuel supply—one component of the resilience of the power grid—has become an increased area of focus.”

As PJM President and CEO Andrew Ott noted in a May blog post, the study’s main purpose was to answer a “legitimate” question: “Are we going to find ourselves in a situation where we are overly dependent on one fuel delivery system?”

No Immediate Threat to Reliability

On November 1, the grid operator unveiled its results, though it said a more detailed report will be published in December.

The study’s conclusions are for the most part unsurprising. In a 14-day period of cold weather with a typical winter peak load (of 134,976 MW, which occurs 50% of the time), and even considering generation retirements and additions that had been announced as of October 1, 2018, the system would remain reliable, it says.

Even in a scenario that combines an extreme winter load (of 147,72 MW, which occurs 5% of the time) and a pipeline disruption at a critical location that serves a significant number of generators, PJM’s system would still be reliable, the report said.

However, it also identifies a “tipping point”—where the system risks emergency procedures and load loss. That event would occur if the system had escalated retirements in combination with an extreme winter load.

The study analyzed two “escalated retirement” scenarios: one modeled retirements of 32,216 MW by 2023 but assumes 16,788 MW of capacity will be added to meet the installed reserve margin requirement of 15.8%. The other modeled retirements of 15,618 MW by 2023 with no capacity replacement. Both retirement scenarios showed similar results that indicate the system may be at risk of emergency procedures and load loss, the study says. However, PJM noted its reserves have “historically exceeded the installed reserve margin reliability requirement,” and that the range of retirements analyzed represented “possible bounds” of retirement levels, “recognizing that market signals would limit retirements between those bounds.”

In stressed scenarios, assumptions that contribute to the level of load shed include a combination of: 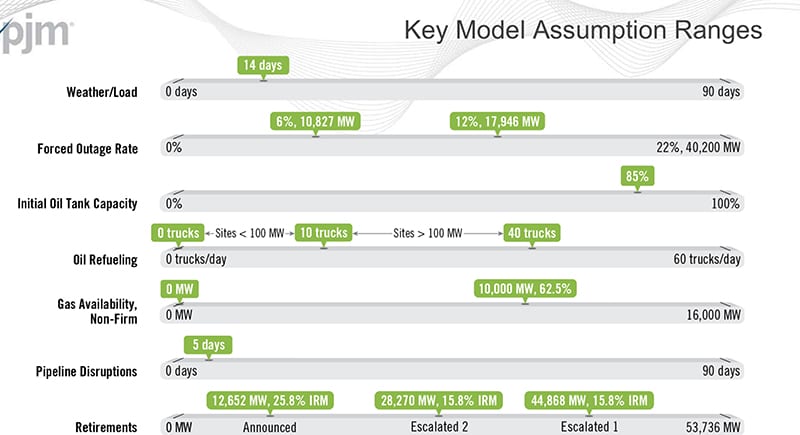 Defining resilience as “how grid operators manage the risk of high-impact disruptions,” it focused on four key aspects:

The study, it said, was spurred by a PJM March 2017 paper that acknowledged the shift in fuel mixes and changes in technology “raised important fuel security questions.”

PJM’s study is significant because of its vast footprint.  While grid operators appear to be divided on how to approach resiliency, they agree that solutions should be “in market.” 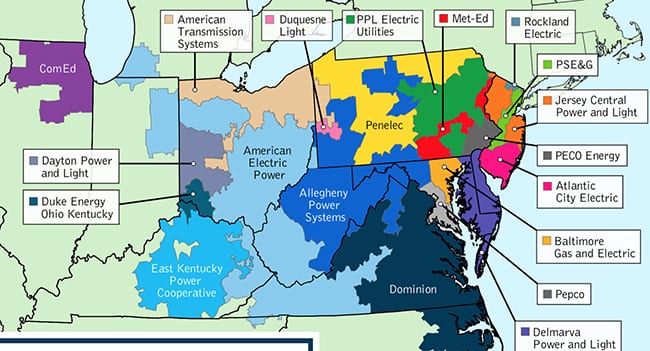 PJM, specifically, has implemented capacity performance reforms. On October 2, it filed two new approaches with the Federal Energy Regulatory Commission (FERC) that involves a coupling of the expanded minimum offer price rule (MOPR) and a resource carve-out (RCO). Public responses to the proposed approaches are due November 6 (in Docket No. EL18-178), and FERC has said it could issue an order before January 4, 2019. PJM, however, has delayed its next base residual auction (for the 2022–23 delivery year) from May to August 14, 2019, to give FERC enough time to approve the proposal, and for PJM to implement rule changes.

In the meantime, PJM said on November 1 that it will take action on the fuel security study. “While there is no imminent threat, fuel security is an important component of ensuring reliability – especially if multiple risks come to fruition. The findings underscore the importance of PJM exploring proactive measures to value fuel security attributes, and PJM believes this is best done through competitive wholesale markets,” PJM said. PJM also plans to continue to engage FERC on national fuel security issues that the grid entity outlined in its response to FERC’s resiliency effort, as filed in docket (Docket No. AD18-7-000).

FERC opened the docket this January after it slapped down the Department of Energy’s (DOE’s) September 2017 proposed “Grid Resiliency Pricing Rule,” which directed FERC to require that grid operators establish reasonable rates for power plants that show “reliability and resiliency attributes.” The Trump administration’s efforts to force grid operators to buy power from uneconomic coal and nuclear plants—with a focus on fuel security and resiliency and for national security—meanwhile appears to have been shelved. The draft memo, leaked on May 31, said that regulatory and economic factors have prompted the premature retirement of “fuel-secure” plants—which include nuclear and coal, but also oil-fired and dual-fuel units with adequate storage—at the “expense of fuel security and resilience.”

With the study’s release, PJM now plans to engage with stakeholders to discuss potential solutions. It will host a “Special Markets & Reliability” conference call on November 26 to address additional questions, and hold another meeting on December 20 to discuss additional detail in the paper. Any potential market design or rule changes stemming from the study will then likely be filed with FERC in early 2020.