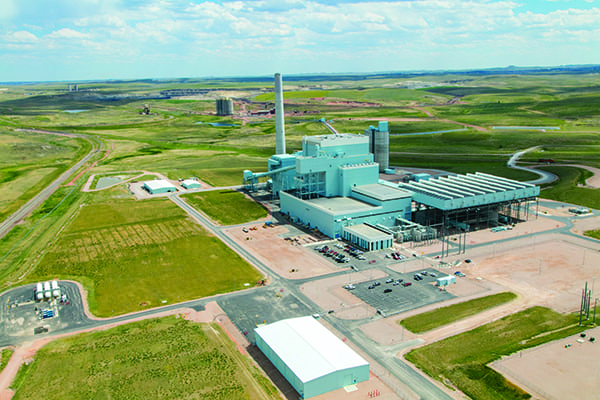 Since it entered commercial operation in 2011, the plant—outfitted with a bevy of advanced technologies designed to comply with the strictest environmental rules—has quietly been refining its performance. And today, manned by a full-time staff of just 83, the plant is one of the nation’s most efficient and cheapest power providers.

Though Dry Fork is fueled by low-sulfur Powder River Basin (PRB) subbituminous coal, sourced from the Dry Fork Mine via a conveyer system just a mile away, its emissions of major pollutants fall way below federal and state requirements. It consumes little water and is a zero-liquid discharge facility. Owing largely to commitments to environmental protection and community partnership, it is also the site of an integrated test center (ITC) dedicated to carbon capture, utilization, and sequestration (CCUS) technologies.

From the beginning, developers sought to “basically orchestrate the cleanest coal-fired power plant that has ever been built from an environmental standpoint,” Dennis Thorfinnson, Dry Fork plant engineer, told POWER. To a large extent, that has been unquestionably successful. “We’ve taken PRB, have high capacity factors, and realistically have absolutely nobody realize you’re running a plant, because nothing is coming out of our chimney,” he said. 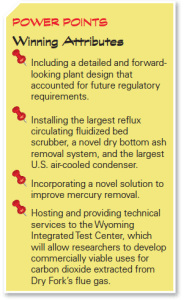 From Development to Commercial Operation

The $1.35 billion power plant was conceived in 2002 when studies projected that Bismarck, North Dakota-headquartered Basin Electric would need more generation by 2011 to supply its 141-member rural electricity systems in at least parts of nine states. The project was formally announced in December 2004, but it didn’t secure regulatory permits, including an industrial siting permit and an air permit, until October 2007. Construction amassed more than 6 million man-hours (at peak, the workforce was more than 1,300 people) without a single lost-time incident. Basin Electric noted that the industry average for this magnitude of major construction is about 39 lost-time incidents.

For Dry Fork Plant Manager Tom Stalcup, that was perhaps the plant’s most significant achievement. The people who run Dry Fork are its most prized aspect, he told POWER, and the plant continues to have a “good safety record.” As it was when construction began, every day begins with safety discussions “so we’re making sure our folks go home every day in the same condition that they come to work,” Stalcup said.

The plant’s myriad other noteworthy attributes are rooted in its design, which Basin Electric painstakingly reviewed along with engineering consultant Sargent & Lundy using an award-winning 3-D PLADES model. As well as envisioning technology integration and construction concerns, the team considered future costs and reliability issues. For example, siting the plant at a mine-mouth owned by nonprofit cooperative Western Fuel Wyoming (of which Basin Electric is a member) eliminated fuel transportation costs. The payoff for that alone has been significant. “Six years in a row, Dry Fork has been the lowest fuel-cost coal plant in America,” Stalcup said.

Operating and maintaining the plant, too, were a key part of the design. “The team developing the design of the plant had a lot of operations and maintenance experience because we wanted to make sure the [plant] could be maintained without huge unexpected costs,” Stalcup noted. 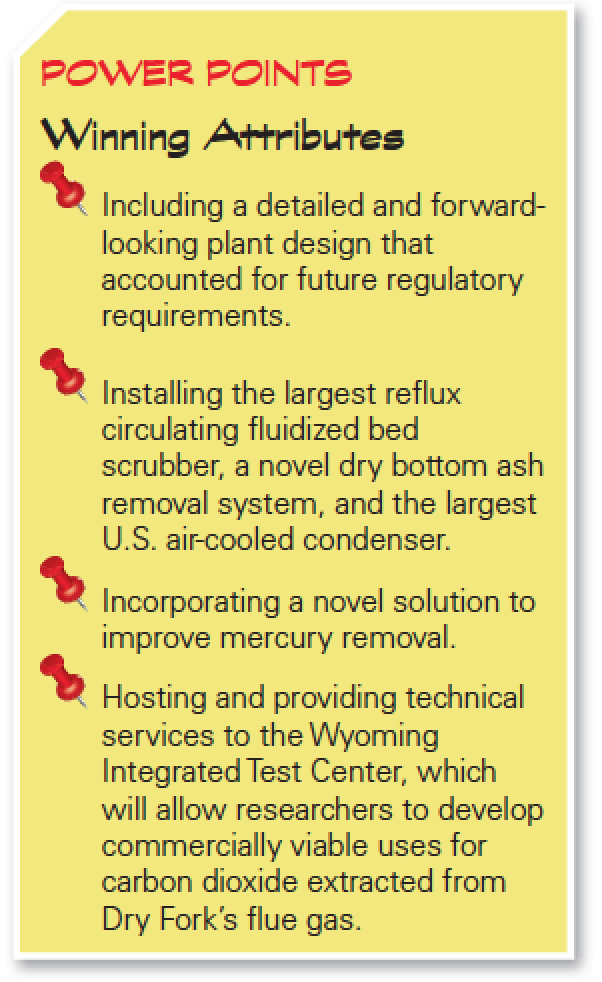 Because the project was developed at the height of a regulatory push to control air and waste emissions from steam generation facilities, plant designers—which had a much wider range of efficient technologies to choose from compared to many U.S. coal facilities that were built decades before—sought to ensure the facility would always be in compliance.

The benefits are remarkable. Dry Fork’s air permit limits SO2 emissions to 0.07 lb/MMBtu and NOx emissions to 0.05 lb/MMBtu (both on 12-month rolling averages). Dry Fork conducted quarterly relative accuracy test audits, as required, from 2011 through 2013, and annual testing since then. Results have always been low compared to permit limits. Thorfinnson reported that mercury emissions are reduced by 90% and filterable particulate matter has been as low as 0.00 lb/MMBtu. “What makes Dry Fork special is the amount of effort put in on the outset—not as a retrofit. It’s in the design to produce such a clean operating facility,” he said.

Basin Electric contracted Mitsubishi for the turbine and steam cycle, and Babcock and Wilcox for the radiant drum boiler (which was suited for low-sulfur PRB subbituminous coal) and coal handling. Babcock and Wilcox also provided the selective catalytic reduction (SCR) NOx removal system, along with that company’s AireJet low-NOx burners and overfire air.

The designers then went a step further, choosing the best available dry scrubbing technology to cost-effectively address multi-pollutant control. They eventually settled on a semi-dry spray dryer absorption and a circulating fluidized bed scrubbing (CFBS) system designed by Graf-Wulff. Key advantages were that the system consumed up to 30% less water compared to a wet flue gas desulfurization system, and it demonstrated 98% of desulfurization. Waste could also be used for landfill at a nearby open-cast coal mine, significantly lowering costs. Stalcup, who was brought onto the Dry Fork team owing to prior experience with CFBS technology, also noted that, at the time, Wyoming was “pushing zero startup or shutdown exclusions,” meaning compliance 100% of the time. A CFBS system allowed that, he said. To cater to Dry Fork’s 420-MW size, the CFBS that was designed and installed was the largest of its size in the world at the time.

Dry Fork also became the first Basin Electric coal plant to install activated carbon injection (ACI) for mercury removal. However, according to Thorfinnson, over the course of operation, plant operators “kind of stumbled” onto the discovery that using a combination of ACI and amended silicates drastically reduced the amount of mercury in its flue gas rather than using each one alone. “Instead of feeding just 140 pounds an hour of activated carbon, we could feed 10 pounds of amended silicates and 10 pounds of activated carbon, and maintain compliance,” he said. “It drastically dropped the cost of mercury removal” because halogenated ACI costs nearly three times as much as amended silicate.

Among Dry Fork’s other notable “firsts” is that it became the first U.S. project to install a Magaldi dry bottom ash removal system. Project development was ongoing when the catastrophic coal ash spill occurred in Kingston, Tennessee, in December 2008, Stalcup explained. “It just made sense from a cooperative standpoint, not knowing what the future rules were going to be on wet systems, to eliminate the risk.”

Finally, Dry Fork houses the largest air-cooled condenser in North America. Developers made the decision to install the state-of-the-art condenser, which includes a large radiator and 45 250-horsepower motors with variable frequency drives, because it wouldn’t require siting close to a body of water. Still, Dry Fork eventually modified the condenser with “wind walls” to make it more efficient during Wyoming’s cold winters. “It has drastically reduced our water consumption to make electricity by several thousand gallons a minute,” Thorfinnson said.

Armed with the benefit of foresight, designers also left 16 acres on the plant’s back side vacant for a future pollution control expansion. In 2014, coal-rich Wyoming passed measures to advance carbon capture and storage initiatives to reduce emissions and ensure coal has economically viable carbon solutions. As Stalcup recalled, three coal generators in the state, including Basin Electric, were invited to provide input on where to best site the Wyoming Integrated Test Center (ITC), a facility that would allow researchers to test CCUS technologies using 20 MW of scrubbed coal-based flue gas. “I think one reason that Dry Fork was picked was that we had the infrastructure and the space,” he said.

As soon as it was announced in 2015, the ITC quickly made headway. “In 2016, we had one of our major outages, timing which was perfect to tie in the unit’s flue gas,” Stalcup said. By July 2018, the ITC was fully built and awaiting formal opening. Funded by $15 million from the state, $5 million from Tri-State Generation and Transmission Association, and $1 million from the National Rural Electric Cooperatives Association, the center features six test bays (individually fed with Dry Fork flue gas) designed to accommodate projects of varying sizes and power needs (Figure 1). At present, five finalists—from India, China, Scotland, Canada, and the U.S.—for the NRG COSIA Carbon XPRIZE are slated to test their technologies at the facility.

It is expected that projects will capture all or part of the 12.5% of carbon dioxide in Dry Fork’s flue gas and turn it into products like fertilizer, fish food, and building materials. Kawasaki Heavy Industries will take on the sixth slot to test its solid sorbent capture technology.

For Stalcup, the efforts are promising. “It will be interesting to see over the next few years as to what these visionaries can do. Hopefully, it will be to save coal as a viable generation source—because I think Dry Fork is a great example of what you can do if you do it right and you have the right team of people together evaluating your risks,” he said. ■