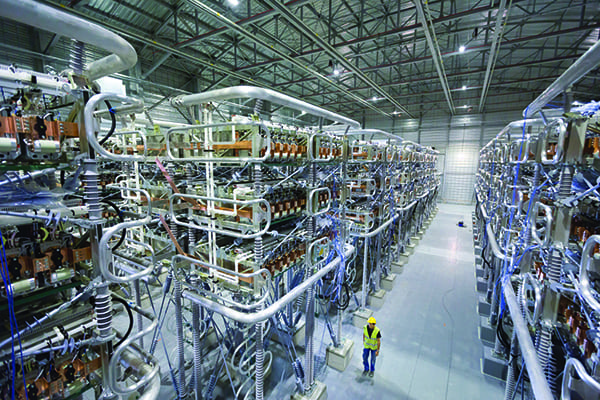 “One big advantage to HVDC is the efficiency of power transmission over long distances,” George Culbertson, vice president of power delivery markets for HDR, told POWER. “If the transmission line route is longer than about 300 miles, DC is a better option because AC lines have more line losses than DC for bulk power transfer.”

Converting from AC to DC

Conversion technology is well-established. Electrical pioneers were working on the building blocks for HVDC-links back in the late 1800s. Conventional HVDC converter technology is based on the use of line-commutated or phase-commutated converters. In 1954, ASEA, the predecessor of ABB, used this classic technology utilizing mercury arc valves to construct the world’s first commercial HVDC link between Västervik, on the east coast of Sweden, and Ygne, on the island of Gotland in the Baltic Sea. The original Gotland link could transfer 20 MW over a 98-kilometer (km)-long submarine cable with a voltage of 100 kV. The service was re-engineered in 1970, increasing capacity to 30 MW at a voltage of 150 kV through the addition of a thyristor valve bridge.

Vince Curci, underground transmission project manager with HDR, said one of the advantages of VSC technology is that it is very compact. “They require maybe 30% of the area of a conventional converter and about 50% of the weight,” Curci said. That makes them a good choice for offshore wind farms. “A 600-MW VSC requires less than one acre of land, whereas a conventional converter requires three or four acres. So, the advantage of this new technology is that you can put them at sea on a small footprint and transfer power to land via submarine cables.”

One example of that is the DolWin2 project (Figure 1). TenneT, a European transmission system operator with operations in the Netherlands and Germany, required a 916-MW HVDC link to connect the Nordsee One, Gode Wind I, and Gode Wind II wind farms to the onshore transmission grid. ABB designed, supplied, installed, and commissioned the compact offshore and onshore converter stations, as well as the subsea and underground cable systems.

The wind farms are connected with AC cables to an HVDC converter station installed on an offshore platform in the North Sea. The DC power is then transmitted through a 45-km-long sea-cable system (Figure 2) and further 90-km-long land cable to an onshore HVDC station at the grid connection point of Dörpen West. The project was completed by ABB and handed over to TenneT in June 2017.

“HVDC is the technology of choice for reliably and efficiently transmitting large amounts of power over long distances with minimal losses. It is ideal for integrating remote renewable energy into the power grid,” Claudio Facchin, president of ABB’s Power Grids division, said in a press release announcing the project’s completion. Siemens has also completed projects of this nature.

One thing that often puts the kibosh on an HVDC project is cost. Converter stations are expensive. “VSCs for a large HVDC transmission project could cost in excess of $100 million and depends on voltage and power rating,” Curci said. Therefore, it’s prudent to complete a study of the available alternatives. Three main factors need to be considered.

“AC systems have lower capital costs, but a much steeper line slope as you increase the distance. Along the length, they need compensation, especially at high voltages, because they require what we call VAR [volt-ampere reactive] support,” continued Curci. “HVDC systems have a much higher capital cost, but as the distance increases the slope of the line is flatter. So, there is a point where these two lines intersect, and that’s your breakeven point—that’s a function of distance, voltage, and power transfer.”

Culbertson recalled a study he had been involved with early in his career. It was completed for a gas company that was trying to determine if it was more cost-effective to build a natural gas pipeline or an HVDC transmission line from Turkmenistan, where gas was plentiful, to Pakistan, where power was needed, by way of Afghanistan. Both options were very expensive. Ultimately, the project never got off the ground due in large part to political unrest in the region.

But there are plenty of projects that are moving forward. In March 2017, a consortium between Siemens and Sumitomo Electric Industries Ltd. was awarded an HVDC order from Indian transmission operator Power Grid Corp. of India. The team will construct a 200-km-long HVDC connection, using both underground cable and overhead lines, between Pugalur, Tamil Nadu, and Trichur, Kerala. It will be India’s first HVDC link featuring VSC technology. Siemens is supplying two converter stations with two 1,000-MW parallel converters, while Sumitomo Electric is responsible for the cross-linked polyethylene HVDC cable system in the DC circuit. The combined order volume for the two companies is about $520 million. Grid connection is scheduled in the first half of 2020.

Siemens is also involved in a couple of UK projects. The Nemo Link will interconnect the British and Belgian national grids via subsea cable. Siemens is responsible for the turnkey installation of a converter station on an 8-hectare site in southeast England, formerly occupied by the Richborough Power Station, and a similar converter station in the Herdersbrug industry zone in Bruges, Belgium. The 140-km-long link, with a 1,000-MW capacity and 400-kV operating voltage, is expected to enter commercial operation in 2019. Additionally, the ElecLink will connect the British and French power grids. HVDC cables will be routed through the Channel Tunnel as part of that project. The 51-km-long link will have a 1,000-MW capacity and 320-kV operating voltage (Figure 3).

ABB is also working on a project that will connect the English and French markets. With a capacity of 1,000-MW, the link will run from Chilling, Hampshire, on the southern coast of England, to Tourbe in northern France—a distance of 240 km across the English Channel. Furthermore, ABB received an order in early July to upgrade the HVDC link that interconnects New Zealand’s north and south islands.

“From my perspective, one of the biggest challenges to any project is permitting, especially when you’re talking about a 500- or 1,000-mile line,” said Culbertson. “You’re going to be crossing different jurisdictions—cities, counties, states, or even countries.”

However, that challenge isn’t isolated to HVDC projects. Any transmission project can face difficulty obtaining the necessary permits. There is often a negative public reaction from impacted residents who don’t want to see towers running through their neighborhoods or across their land. In the western U.S., there is a lot of federal land that may need to be crossed, which adds complexity with respect to obtaining permits from agencies such as the Bureau of Land Management.

Almost all projects require some form of environmental impact study to address temporary and permanent impacts, and the process can be time-consuming, sometimes requiring years to complete. Furthermore, there are right-of-way requirements that must be adhered to in terms of width for installation, operation, and maintenance, depending on voltage and number of lines. There are also horizontal and vertical clearance obligations—really nothing is left to chance.

Although converter stations are expensive, HVDC projects do have some cost advantages over AC systems. “DC lines can actually be cheaper per mile because of the way the conductors are configured,” said Culbertson. “You have to have three separate phases for AC, so for a large line you have three sets of conductors, usually they’re multiple bundles of conductor—very heavy—and the towers have to be pretty massive to hold all that weight. That additional steel and aluminum also adds to the visual impact.

“A DC line can deliver comparable amounts—or even higher amounts—of power using only two sets of conductors as opposed to three, so the towers don’t have to be quite as large resulting in much less installed cost on the transmission part of it. You can also run longer DC lines underground. So, there can be a big advantage to DC where permitting and visual impact is a concern,” Culbertson said. ■