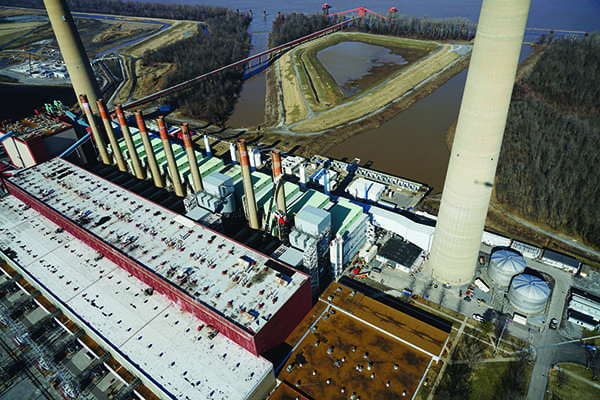 Emissions standards have changed a lot since the Shawnee Fossil Plant entered service during President Eisenhower’s second term in office, but the Tennessee Valley Authority has done its part to help the facility meet all current regulatory guidelines. A recent retrofit added selective catalytic reduction and flue gas desulfurization to Units 1 and 4 at the plant. Space made the projects challenging, but both were successfully implemented.

The Paducah, Kentucky, Convention and Visitors Bureau website says, “Creativity is the common thread that connects people from around the globe to Paducah.” There are few places around Paducah where creativity has been more important than at the Shawnee Fossil Plant located about 10 miles northwest of town. Space limitations forced the Tennessee Valley Authority (TVA) and its contractors to be creative in order to install dry flue gas desulfurization (FGD) and selective catalytic reduction (SCR) retrofits on Units 1 and 4 at the facility.

The plant, which takes its name from the Shawnee Indian tribe, has nine active generating units with a summer net capacity of 1,206 MW. The station—commissioned in 1957—was originally built with 10 units; however, Unit 10 was idled in 2010 and retired in 2014.

TVA hired AECOM in 2015 to complete FGD and SCR retrofits at Shawnee. The measure was required as part of an agreement with the U.S. Environmental Protection Agency, as well as several states and environmental advocacy groups, to reduce emissions from Units 1 and 4 by December 2017. AECOM performed the engineering, procurement, construction, construction management, and commissioning for the project.

Shawnee burns mainly low-sulfur Powder River Basin coals. The new FGD system was designed to remove 96% of the SO2 produced in the combustion process. Although the boilers were previously equipped with low-NOx burners, additional reductions were mandated by the clean air agreement. As a result, the SCR systems—designed to remove 90% of the nitrogen oxides produced in the combustion process—were also required on Units 1 and 4. As an added benefit, the plant’s Clean Air Program reduced mercury emissions by about 80% as well.

Larry Nathan, TVA’s project manager for the job, told POWER that the public corporation’s Clean Air Projects group has been installing scrubbers since 2004 at various facilities including Paradise, Bull Run, Kingston, and Gallatin, a 2017 POWER Top Plant award winner (see “Improved Emission Controls and State-of-the-Art Ash Handling Extend Gallatin’s Life” in the October 2017 issue). “Our team within TVA has worked together for a long period of time and we’ve learned a lot, so we utilize a lot of those people from project to project, which adds to the success,” Nathan said.

Several members from both groups had worked on the Gallatin scrubber before transitioning to the Shawnee retrofits. “We took our lessons learned from that project and utilized them on this project. We coordinated well with each other and kept the plant abreast of work that was going on,” said Nathan.

In an exclusive interview with POWER, Dennis Pennline, power project manager with AECOM Construction Services, said the Shawnee project “was a very interesting job.” He said one of the biggest challenges was working within the available footprint for the SCR and dry scrubber. Units 1 and 4 couldn’t be taken off-line for the two-year duration of the project, so a temporary bypass had to be installed on both units and then the SCR and FGD had to be constructed around the ductwork. “That was probably one of the biggest challenges we had from a sequencing and construction—and engineering—point of view,” recalled Pennline.

Before new equipment could be installed, original chimneys and 1960s-era electrostatic precipitators, which were retired after baghouses and two common stacks were installed many years earlier, had to be demolished to make room. As much work as possible was done with the units online. International Chimney Corp. cut and demolished the stacks from the top down with debris dropped inside the chimneys. The stacks had been constructed all the way to the basement of the powerhouse—about 35-feet below grade—so debris removal posed additional difficulty. Nonetheless, AECOM finished the below-grade demolition and engineered proper foundations for the new installation.

Most of the fabrication was done in a laydown yard south of the plant. GE Power (legacy Alstom Power) designed and supplied material for the FGD system, while Babcock Power designed and supplied material for the SCR and ATF. Sections were placed on flatbed trailers and hauled over to the plant for installation. Much of the material for Unit 4—one of the innermost units at the plant—had to be brought in from the Unit 9 side because concurrent work on Unit 1 limited access from that end.

“We utilized a lot of the local craft,” Nathan said.

About six months into the project, a 70-day “bypass outage” was conducted. Among other things, the pre-fabricated bypass ductwork was tied-in, and final pilings and foundations were completed while the boilers were offline.

Due to space limitations, only one tower crane could be erected on each unit (Figure 1). That meant each crane had to be capable of installing both the SCR and the FGD. To maximize hook-time, AECOM worked two shifts for about a year after the bypass outage. On days, pieces would be lifted for the SCR, while on nights, crews would hoist FGD sections into place. Welding alternated on the opposite schedule.

“There was a lot of coordination to do all that,” Pennline said.

Being essentially a vertical-construction project posed additional problems. Workers were often forced to work above and below one another. The hazards of such an arrangement are obvious.

“That offered some challenges relative to being able to sequence work with scaffolding and everything while still keeping areas available, but also from a safety point-of-view,” said Pennline. “We used a lot of netting, if you will, and a lot of fencing. We had a 100% tool-tethering policy for all vertical work. It was really something we had to focus on.”

There was about a two-month lag in the two schedules throughout construction. Work started on Unit 4 first. Its “tie-in” outage, which required cutting into the back-end of the boiler and connecting the SCR and FGD to the baghouse, began in August 2017. Portions of the bypass ducting were used for the tie-in, while other sections were retired in place. The tie-in outage was finished on Unit 4 in the first week of October. The Unit 1 tie-in outage began the last week of September and finished in November 2017. 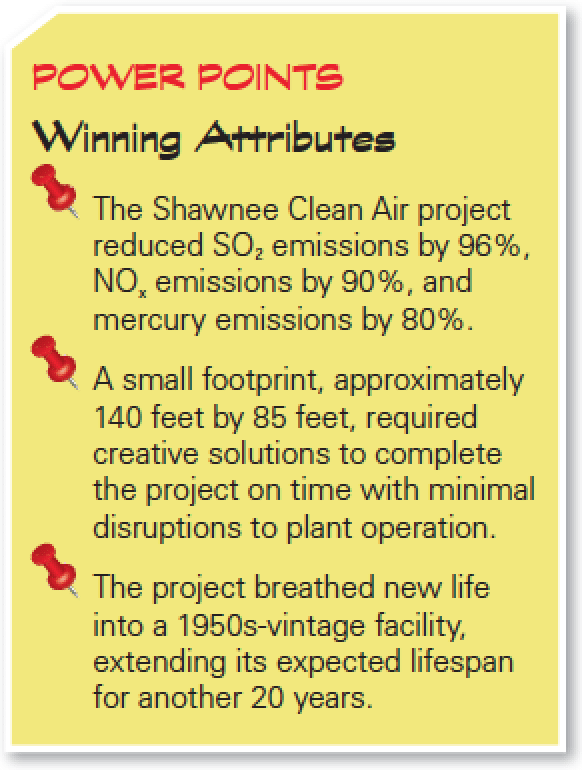 Yet, a project isn’t complete until systems are integrated into a plant’s operation. TVA’s process included having several people from the plant work with the Clear Air Projects group. Their job was to walkdown systems, create unique identification numbers and install tags on all equipment, develop operating and clearance procedures, and assist with commissioning and acceptance of systems.

“We had a really good team and everyone really took ownership of the whole process. It’s a timely process. A lot of work goes into it,” Rodney Souder, the team’s shift operations supervisor, told POWER. “You’ve got to do a lot of research, ask a lot of questions, and talk to different people. Ultimately, you draw out a procedure and then we try to be the boots on the ground trying to utilize that procedure whenever we go out there commissioning and make sure that procedure is for all practical purposes honed out and is in good working order.”

Because of the double shift, AECOM needed about 30 construction supervision and commissioning staff during the peak of construction. Craft labor on the project peaked at around 350 workers, according to Pennline. In the end, the safety record for the project was excellent. “Only one recordable with 1.3 million work-hours,” Pennline reported.

The engineering phase of the project was completed on time in approximately 21 months and the construction work spanned about 24 months. Shawnee’s Clean Air Program is expected to extend the life of the facility for another 20 years, making it a sound investment for TVA’s customers.

“It was a very successful project,” said Nathan.

The Paducah Convention and Visitors Bureau probably wasn’t thinking of the Shawnee Fossil Plant when it referred to the area’s creativity—the town is more recognized for its craft and folk arts, fiber arts, and quilting—but there is no doubt that TVA and the contractors involved in the Shawnee Clean Air project embodied that creative spirit. As such, POWER is pleased to recognize the Shawnee Fossil Plant as one of its 2018 Top Plants. ■