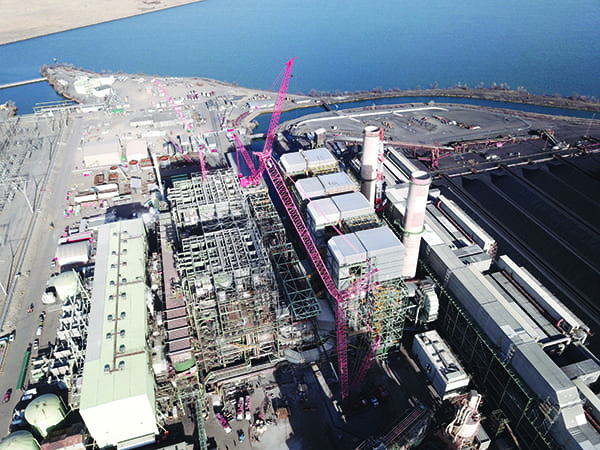 The numbers tell the story of how the addition of selective catalytic reduction (SCR) technology helped an iconic New Mexico coal-fired plant reduce its emissions, keeping the plant in operation and continuing to be an economic driver for the local Navajo community.

Emissions regulations for U.S. coal-fired power plants have been top-of-mind for operators over the past several years. And meeting environmental regulations is not the only consideration for plant owners. There’s the cost of adding emissions reduction technology at an existing plant, balanced against the economics of keeping the plant online, and the impact that closing a plant would have to the local community, with lost jobs and tax revenue.

Arizona Public Service (APS) pondered those scenarios when considering the future of its Four Corners Generating Station, located about 15 miles west of Farmington, New Mexico, on land leased from the Navajo Nation. The plant has operated for nearly 70 years; the first two units of the plant came online in 1963, with a third unit completed a year later. Units 4 and 5 began operation in 1969 and 1970, respectively. 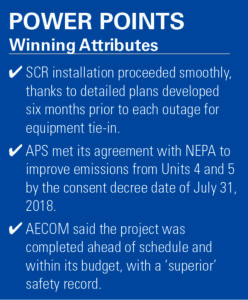 After the three older units were closed and torn down several years ago, APS developed a strategy to reduce emissions at the remaining two, 770-MW coal-fired units to comply with National Environmental Policy Act (NEPA) clean air standards. The decision was made to install selective catalytic reduction (SCR) technology on Units 4 and 5, which were previously retrofitted with SO 2 scrubbers in the mid-1980s.

APS in 2014 hired AECOM, the California-based multinational engineering firm, to engineer and build an emissions reduction system that would remove nitrogen oxide (NOx) and sulfur trioxide (SO3). The project included installation of the SCR retrofits on Units 4 and 5. Legacy AECOM companies had completed other projects at Four Corners, including a retrofit of a flue gas desulfurization system to reduce SO2 emissions, the addition of fabric filters to control particulate matter emissions, and other smaller projects. AECOM’s work also included other studies, including an initial feasibility study and estimate for an SCR retrofit in 2000.

The SCR retrofit installation began in August 2015. The new technology on Unit 5 was completed in May 2018, and finished in July 2018 for Unit 4.

The project has done much more than just reduce emissions at Four Corners. By allowing the plant to keep operating, it has allowed the plant to continue to be an economic driver for the Navajo Nation and the surrounding community, supplying jobs along with tax revenue to support schools and community projects.

“APS’s installation of pollution controls at the Four Corners Power Plant is part of our continued investment in a cleaner energy future,” Brent Gifford, manager for major fossil projects with APS, told POWER. “It also sustains the plant as a 24/7 generation resource that helps maintain reliable, affordable energy for Arizona and the Southwest.”

Team Approach to a Large Project

The SCR project at Four Corners was no small task. The major participants, along with APS and AECOM, included Sundt Construction, a regional construction company, and Riley Power, part of Babcock Power Inc. Riley is known for manufacturing equipment for all types of fossil and waste fuel-fired boilers, including SCR systems.

AECOM told POWER that the company’s role on the project “was to engineer, procure, and construct all of the required equipment and materials. AECOM teamed with a regional construction company, Sundt Construction Inc., to construct the majority of the scope. As a regional company, Sundt brought a substantial Navajo workforce to bear on the concrete, structural steel, and piping installation scope.”

■ Retrofit of economizer bypass piping and valves into the existing boiler feedwater piping to accomplish low-load flue gas temperature control and increase the operating range of the SCR reactors.

“The SCR technology installed will reduce nitrous oxide emissions by more than 80%,” said Gifford. “APS is installing these SCRs to meet the Regional Haze Regulations authorized under the federal Clean Air Act, the [Environmental Protection Agency’s] Federal Implementation Plan, and the Consent Decree entered on August 17, 2015.”

AECOM told POWER the SCRs (Figure 1) are the tallest in North America at 230 feet, adding “AECOM, in collaboration with Sundt Construction and Riley Power, helped APS meet its agreement with NEPA to improve emissions from Units 4 and 5 by the consent decree date of July 31, 2018.”

AECOM told POWER that “Fostering and managing a close working relationship with Sundt personnel and key client contacts was vital to the success of this project. A project management office was developed that involved all project stakeholders, including the owner, engineer and construction staff. The project team quickly became one cohesive working group, which allowed for rapid problem identification and resolution.”

Installation of the SCR equipment required outages during tie-in work. AECOM and Sundt created an outage planning team to develop detailed plans six months prior to each outage, identifying critical milestones, work activities, and contingency plans. The team developed a scoring matrix and brought in third-party experts to evaluate the effort and provide recommendations for improvement. The third-party inspectors included project and safety managers with prior direct responsibility for similar SCR installation projects.

Said AECOM: “Utilizing a modular construction approach at the outlying fabrication yards, Sundt was able to perform the majority of duct section insulation requirements on the ground, enhancing safety, cost and schedule. The remote modular assembly approach also substantially reduced congestion at the power block work areas. With detailed scheduling and sequencing, Sundt was able to maintain a consistent flow of material to the three major construction cranes, enhancing schedule and project efficiency.

“Due to the compact nature of the work site and the need to lift heavy components and modularized sections over existing operating equipment, it was necessary to mount one of the heavy lift cranes, an 888 ringer, on a steel platform located 160 feet above grade. This crane was complemented by an M18000 located on a custom-installed concrete pad, and a TG2300 tower crane that was located in two positions on site depending on construction needs.”

The project was completed ahead of schedule, within budget, and with what AECOM called “a superior safety record.” AECOM noted that it “was a large-scale project that posed many construction and safety challenges, particularly since the majority of the work was performed at elevation and required substantial and specific efforts for fall protection and dropped object prevention. AECOM and Sundt emphasized safety as part of the fundamental project culture through daily safety initiatives.”

The companies presented Job Hazard Analyses and Task Hazard Analyses at the beginning of each shift, and when workers returned from breaks. There were daily safety surveys, designed to identify and quickly correct any potentially unsafe practices. Safety audits were completed daily. Another challenge: most of the construction took place on an operating plant with constantly changing conditions. The structural steel, ductwork, and SCR components were designed and fabricated to maximize modularization and allow for installation with minimal disruption to the operating plant.

The success of the Four Corners SCR project is notable particularly for its impact on the local community. The plant sources its coal from the nearby Navajo Mine, which has more than 350 workers and has operated since 1963. According to the Navajo Transitional Energy Co., the mine operator, its coal sale agreement with Four Corners continues through at least 2031.

“The Four Corners Power Plant is an economic engine for the Navajo Nation and surrounding community, creating an estimated $225 million annual economic impact on the Navajo and New Mexico economies,” said Gifford. AECOM told POWER that “continued operation of Units 4 and 5 is expected to provide more than $6 billion in economic value to the region over the next 30 years, at least 70% of which will benefit the Navajo Nation and its citizens.”

AECOM said the plant and the mine pay more than $100 million per year in taxes, fees, and royalties to the Navajo Nation and state, local, and federal entities. The company pledged to support the local Navajo community from the onset and throughout the duration of the project, backing several initiatives, including many events targeted at local youth.

AECOM told POWER that the Four Corners SCR Project “has improved the quality of life for people on the Navajo reservation, through construction and permanent employment and the reduction of pollutants discharged by the plant. In addition, one of the goals of the project was to reduce pollutant haze at the Grand Canyon, restoring the grandeur of this important national treasure.” ■