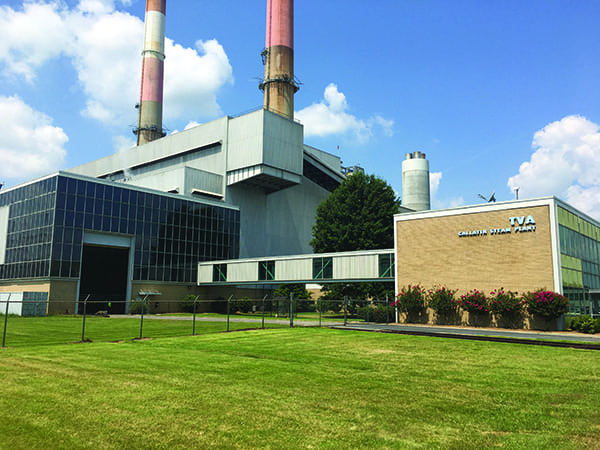 It may not be the newest plant in the Tennessee Valley Authority fleet, but the Gallatin Fossil Plant has been retrofitted with some of the latest technology available to the coal power industry. It’s got new dry scrubbers, a lined landfill, an innovative haul road, and more changes on the way. The improvements are designed to keep the facility in service for another 20 years.

In 1933, with the nation mired in economic hardship that would later become known as “The Great Depression,” U.S. President Franklin D. Roosevelt signed the Tennessee Valley Authority (TVA) Act. His goal, as written in a message to Congress, was to create “a corporation clothed with the power of Government but possessed of the flexibility and initiative of a private enterprise.”

It’s fair to say that TVA has lived up to FDR’s expectations. Today, the corporate agency supplies electricity to about 9 million people in parts of seven southeastern states. TVA receives no taxpayer funding, but rather derives its revenues from the sale of its electricity. It also provides flood control, navigation support, and land management for the Tennessee River system, and assists local power companies, and state and local governments with economic development and job creation.

Only 20 years after Roosevelt signed the TVA Act, ground was broken on the north bank of the Cumberland River in Sumner County, Tennessee, for a new coal-fired power plant. Named after the nearby town, Gallatin Fossil Plant’s four units entered service between 1956 and 1959. The 976-MW facility was ideally sited to serve the growing Nashville metropolitan area.

Many plants have come and gone since Gallatin was commissioned, but the future still looks bright for this old jewel. TVA considers the facility a key component of its balanced energy resource portfolio. As such, in 2012 it embarked on a $600 million, 35-month construction project to extend the plant’s life for another 20 years.

The point of the project was really to address two main needs: To meet more stringent environmental regulations and to eliminate the wet disposal of ash. TVA teamed up with AECOM to act as the engineering, procurement, construction, and startup contractor on the project. Other major partners included Alstom Power Inc. and Foley Co.

The design and construction of the “Clean Air and Dry Storage” project included three primary elements.

Scrubbers. First on the list were four dry scrubber units. AECOM joined with Alstom Power to accomplish the design and construction of the scrubbers. Being an older coal-burning plant, Gallatin was not originally built with an air quality control system to reduce SO2 emissions. However, with the U.S. Environmental Protection Agency (EPA) rolling out new regulations, retrofitting the units would be the only way for the plant to continue operating beyond April 2016.

The dry scrubber design chosen was Alstom’s Novel Innovative Design (NID). The NID system is a variant of dry flue gas desulfurization technologies. One advantage is that it allows the existing boilers to operate in a relatively wide load range while still adequately controlling flue gas emissions. When the design was first selected, there were only two such installations in the U.S., and both were in early stages of operation. In other words, it wasn’t a well-proven system, so there were risks, but engineers had worked through all the details and felt confident that everything would perform as advertised.

“I’m very familiar with the 20-year-old technology of wet scrubbers,” Cherry said. “I feel very blessed that we’ve gone with a newer, dry scrubber technology. [It’s] much less maintenance intensive and clearly 20-years-newer technology that’s really going to benefit us here and allow us to remain competitive and keep our generation costs low,” he added.

The dry scrubbers were ultimately located immediately west of the existing plant. That meant some equipment would have to cross over the plant’s discharge canal. The flue gas ductwork for two of the units traversed the canal via a structural steel bridge topped with a concrete deck that spanned 178 feet. Erection consisted of assembling two trusses into a box section and the use of a flying connection approximately 45 feet from the fixed end.

Beyond the scrubbers, AECOM and Alstom Power also teamed up on the installation of new pulse jet fabric filters for the four units. To keep the footprint small, which was important due to limited space, 10-meter-long bags were used in the design. In the end, the dry scrubber has reduced SO2 emissions by 95%, and the baghouses have decreased particulate emissions.

Dry, Lined Landfill. The second important element AECOM designed into the construction project was an EPA-compliant dry, lined landfill facility. Like many other coal-fired facilities built at the time, Gallatin was constructed with a wet ash system. As part of the Clean Air and Dry Storage project, AECOM and Foley Co. designed and constructed the byproduct handling system that completed Gallatin’s switch to dry fly ash handling (Figure 1). The plant will finish its transition to 100% dry ash handling when its bottom ash system is converted. That’s expected by the fall of 2019.

The plant expects to generate about 400,000 cubic yards of dry coal combustion residuals annually. An on-site landfill facility was considered the best option to handle it. It addressed local residents’ concerns with an off-site solution, which included potentially adverse impacts to public roadways, land, and other resources, yet it still met all of the EPA’s requirements.

The Gallatin site presented some unique geological and technical challenges, with much of the more suitable plant property having been extensively developed with wet storage operations and facilities. Nonetheless, AECOM was able to design a 52-acre landfill footprint in a limited greenfield area on the property.

The location wasn’t ideal. It contained shallow rock, was surrounded by karst areas, ran adjacent to the primary plant access road, and had a 400-acre ash pond complex immediately to the north. The shallow rock was the first thing that had to be addressed. To do so, a controlled blasting program was devised to remove about 125,000 cubic yards of rock. Care was taken to prevent disturbance to adjacent karst areas, the ash ponds, and primary plant access road. In the end, the effort was successful; no adverse impacts were observed as a result of the controlled blasting program.

Haul Road. Last on the list of essential project elements was the design and construction of a haul road capable of supporting heavily loaded trucks transporting coal combustion residuals from the plant to the on-site landfill. Hauling on existing site roads was unfeasible, and the required path presented several obstacles.

Among the challenges were that the road needed to cross over the existing coal conveyor and there were karst conditions below ground. A heavy-duty, single-span bridge was designed to cross the conveyor. Micro-piles were utilized to support the bridge across the karst environment.

The road also needed to traverse an active ash pond complex. Some creative solutions were needed for that task. Using geogrid, stone, and monitoring tools, the team constructed an earthen embankment fill over the loose ash to keep the roadway from settling.

Safely Keeping the Lights on Through the Process

Another hurdle for the project was that the plant needed to remain online while the majority of work was in progress.

“A lot of effort went into how we set up the job site, because not only were we undertaking major construction, we were also running all four of the generating units during this time with just some brief interruptions to do outages to get the new equipment tied in,” said Cherry.

He noted that every day a lot of focus was placed on safety, and a lot of focus was also placed on keeping people out of the generation space if they didn’t belong there. AECOM implemented a range of industry best practices to manage safety challenges. One important area it focused on was developing and sustaining a safety culture for the entire project team.

“They have no tolerance for unsafe work habits out here,” Cherry said. 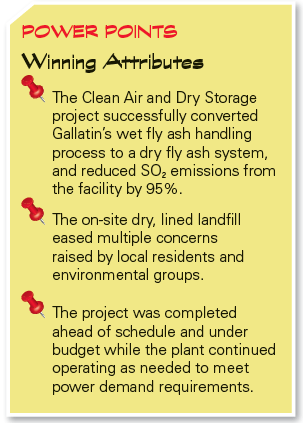 The effort paid off. The project finished with a lost-time incident rate of only 0.07 after more than 6 million hours worked. It also finished four months ahead of schedule and $35 million under budget.

“Although we all have our unique pieces in the puzzle, it’s the best group that I’ve worked with for a major plant modification… No egos,” Cherry said. When the group was faced with a challenge, they reviewed options, made a decision, and everybody worked together to achieve the goal. “That’s not been my experience on other major modifications throughout my career. I’ve never seen the collaboration work as well as it has here at Gallatin. And really, that’s what I’m most proud of,” he concluded. ■