For the past 40 years, titanium has been the material of choice for condenser tubes exposed to sea and brackish water applications. That said, rising raw material costs make it important to reconcile engineering desires with budget limits in new plant designs. As an alternative, you might consider several highly alloyed stainless steels that approach the corrosion resistance of titanium at a modest premium over the cost of more common stainless steel options.

A typical nuclear plant might have six condenser sections, each with perhaps as many as 15,000 1-inch-diameter tubes about 50 feet long. That’s over 140 miles of tubes (Figure 1). Rising commodity prices will push purchasers to review alternative materials rather than automatically selecting titanium as the condenser tube material for the new generation of nuclear plants. 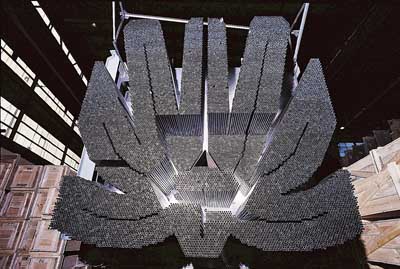 Depending on the quality of the circulating water, many tube material options can be selected for the steam surface condenser. Titanium may be the material of choice for seawater, brackish water, and tertiary-treated municipal wastewater effluent. However, less-expensive super alloy alternatives can be considered when conditions permit. Table 1 compares the mechanical properties of titanium with three less-expensive super alloy alternatives now available in the market. These alloys are UNS S31254 superaustenitic alloy and UNS S44735 and UNS S44660 superferritic alloys. Their perhaps more familiar ASTM designations are included in Table 1.

Table 1.    Typical chemical composition of titanium and three super stainless steels that were tested. Constituents are in percent. Source: ASTM

Once the mechanical properties are found to be acceptable, condenser designers turn their attention to the tube material’s heat transfer properties. The thermal conductivity of these three alternative materials are compared against titanium in Table 2. All three super alloys have reasonable thermal performance in steam condensers, especially when used in thin-wall tube applications. Titanium, due to its improved thermal conductivity, will still outperform the super alloys under consideration. However, the thermal performance of all four candidate materials is decidedly less than that of copper alloys.

Table 2.    Thermal conductivity of the alloys under investigation. Source: ASTM

Experience within the power generation industry has demonstrated that thermal conductivity is only a small contributor to overall heat transfer. Steam and water-side film and fouling coefficients have a more significant influence.

If the super alloys have acceptable mechanical and thermal properties, then the next step is to assess erosion as well as pitting and crevice corrosion resistance.

Erosion resistance. The four alloys under investigation demonstrate excellent resistance to suspended solids (sand) erosion, steam-side droplet impingement, cavitation, turbulence, and high velocity flow, including mechanical damage as a result of flow-accelerated corrosion (FAC). Superior mechanical strength associated with these alloys is the principal reason for their excellent resistance to this type of attack (Table 3).

In particular, UNS S44735 and UNS S44660 exhibit very high mechanical properties and are particularly erosion-resistant. However, they are more difficult to mechanically expand, so they require greater care during tube-to-tubesheet attachment operation.

Certain corrosion resistance measurements are commonly used to assess the resistance of stainless steels to localized corrosion phenomena. Table 4 gives the average, minimum, and maximum values for the Pitting Resistance Equivalent Number (PREN), the Critical Pitting Temperature (CPT), and the Critical Crevice Temperature (CCT) of the three super stainless alloys under investigation, according to the chemical composition range as indicated in ASTM standards. Pay attention to not just the average values but also the minimum values PREN, CPT, and CCT can reach due to the tolerances of the different chemical components of these three super alloys.

The empirical values of PREN, CPT, and CCT are typically accepted benchmarks within industry and are employed as tools to estimate the pitting and crevice corrosion resistance of conventional stainless steel grades. Unfortunately, these calculated values are not sufficiently accurate to legitimately compare the members of the same family of highly alloyed stainless. Corrosion investigations performed on super stainless alloys used in seawater applications require both electrochemical and conventional ASTM tests to get a clearer picture of the materials’ performance.

ASTM G48 standard Method A and Method B tests were conducted on the three superferritic stainless materials under investigation. Weight loss leading to the corrosion rate and visual/ optical examination of the specimens after testing allow assessment of their susceptibility to localized corrosion.

The drawback to ASTM G48 testing is, of course, the use of an artificial medium to test the materials in question. This medium may not accurately represent actual performance in a seawater or brackish water service environment. Therefore, electrochemical tests were performed using artificial seawater as a reference for the actual medium that comes into contact with materials in heat exchangers. The investigations were carried out on welded tube samples of 25.4 mm OD × 0.7 mm wall thickness at 50C, in two testing solutions:

Polarization tests performed in an artificial seawater environment result in a ranking in terms of nobleness of the materials. According to current densities (both critical related to dissolution peak and passivation stage), this same ranking can be applied to the corrosion resistance properties of the alloys. These rankings are, left to right, from the highest rated corrosion resistance to the lowest:

In addition to the polarization tests, electrochemical tests were performed using 100 g/L NaCl solution. This additional testing confirmed the superior corrosion resistance of UNS S44735 over UNS S44660 and S31254.

Cyclic polarization curves measure the pitting potential in 1M NaCl solution according to ASTM Standard G61 (pH 3 – 50C). The results (Table 5) are conclusive and lead to the same ranking as identified in the electrochemical tests.

Tests performed in artificial seawater demonstrated that the heat treatment under a protective atmosphere provides improved corrosion behavior versus either the "as received" or the "open air annealed" specimens. The polarization curve of the "open air" specimen, even if it has been cleaned from residual oxidation in an acidic solution, shows a small increase in the passivation stage conventionally correlated with a small susceptibility to crevice corrosion, which might be generated under the remaining oxidized area.

The use of corrosion rate assessment (Table 6) and pitting potential values (Table 7) also point to a better corrosion resistance of UNS S44735 material when it is heat treated under hydrogen protective atmosphere.

Table 8.    Weight loss corrosion of the alloys under investigation per ASTM G48 Method A and B. Source: Valtimet

The ASTM G-48 pitting and corrosion tests can be generalized to all stainless steels, concluding that welded tubes that are bright-annealed during the production process show better corrosion resistance than those that are open air-annealed and then pickled.

Titanium tubing is the uncontested, superior technical solution for power plant condenser and heat exchanger service, but it comes at a cost. Titanium demonstrates general corrosion immunity in sea and brackish water. Titanium also has better heat transfer performance than the stainless family, has excellent erosion and corrosion resistances, and has an installation track record approaching 40 years of operation without one reported corrosion event. In addition, titanium can be utilized in very thin-wall gauges (down to 0.4mm/0.016 inch), which means savings in both first cost and weight.

Admittedly, the family of super alloy stainless steels is not as corrosion resistant as titanium, but purchasers must perform a complete life cycle cost analysis for each application to determine an acceptable material selection. The good news is that you have options.

Test data and portions of the text were originally published in the April 2008 issue of Stainless Steel World and are used by permission.

—Haydée Richaud-Minier and Gérard Pascal are with Valtimet, France. Hervé Marchebois is with the Vallourec Research Center, France. Dennis Schume is with Valtimet Inc., USA.