Scotland is strategically placed at the widening funnel in which the churning waters of the North Sea meet those of the Norwegian Sea. The region is thought to have 25% of Europe’s tidal power resources and 10% of its wave power potential. Recently, the Crown Estate, which owns the UK seabed and controls the rights out to 200 nautical miles (including the sea off the Caithness and Sutherland coasts, and the waters off the nearby coast from Pentland Firth to the islands of Orkney) opened the seabed for leasing to developers. Now marine energy interests in the region are surging.

Scotland already is a world leader in the testing of marine power projects with what is currently the only full-scale wave and tidal power-testing site in Orkney. In its endeavor to make the region the "Saudi Arabia of tidal power" operations as well, the Scottish government has pumped grants and longer-term revenues to stimulate the marine renewable energy market.

In October, however, as a Scottish newspaper reported, the £13 million ($22.8 million) grant program allocated for the development of marine renewables "dried up." This seems to have incited the Scottish public, who fear that the region is in "danger of squandering its status as the world’s wave and tidal energy capital." But it hasn’t stopped developers from considering the region for commercial implementation of novel marine energy technologies.

The latest proposal comes from Hammerfest Strøm AS, a company jointly owned by ScottishPower Renewables (an Iberdrola company) and two Norwegian firms, StatoilHydro and Hammerfest Energi. In late September, ScottishPower confirmed that it is evaluating three separate coastal sites to commercially develop the 1-MW Lànstrøm tidal stream turbine — what the companies deem the "world’s most advanced tidal turbine."

The Lànstrøm technology has already undergone four years of testing in a Norwegian fjord. It is described as an underwater wind turbine, but with much shorter blades that turn more slowly. The unit stands 30 meters (98 feet) tall on three legs and can work as deep as 100 meters (330 feet) below sea level. It is anchored to the seabed and aligned to the tidal flow (Figure 4). ScottishPower says that, unlike the wind, tides are entirely predictable and operators will quickly know how much power the turbines will generate. 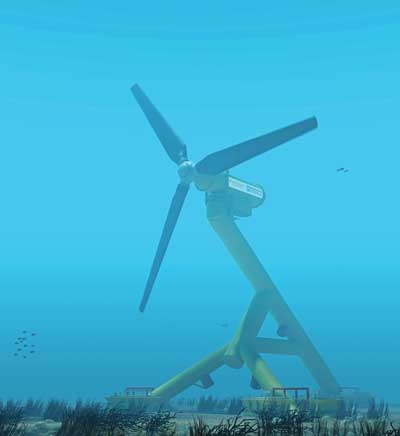 4.    As the tide turns. ScottishPower and Norway’s StatoilHydro and Hammerfest Energi have developed a 1-MW tidal stream turbine, the Lànstrøm. The technology has been tested in a Norwegian fjord for four years and is now ready for commercial deployment. Three sites, two in Scotland and one off the Irish coast, are being evaluated for arrays of up to 5 and 20 turbines each. Courtesy: ScottishPower

The company is considering Pentland Firth — the region in which the world’s fiercest waters churn — the Sound of Islay, and the North Antrim coast in northern Ireland as sites that could each house between 5 and 20 turbines and generate a combined output of up to 60 MW. Eventually, the company wants to see much bigger arrays capable of generating 50 MW to 100 MW.

Environmental impact assessments are already under way, and ScottishPower expects to have planning applications submitted to the Scottish Government and Northern Irish Assembly by next summer. The turbines could be on-line by 2011.