A detailed analysis of power plants in China by researchers from the Massachusetts Institute of Technology (MIT) debunks the widespread notion that outmoded energy technology or the utter absence of government regulation is to blame for that country’s notorious air-pollution problems. The real issue, the study found, involves complicated interactions among new market forces, new commercial pressures, and new types of governmental regulation.

The rate of construction offered by the MIT researchers is much higher than reported by other sources, such as Platts, which reports approximately 70 plants a year being built on average from 2002 through 2006. The Centre for Energy, Petroleum, and Mineral Law and Policy at the University of Dundee in Scotland reports that approximately 110 plants were built each year from 2004 through 2006, citing Chinese government sources.

After detailed survey and field research involving dozens of managers at 85 power plants across 14 Chinese provinces, Steinfeld and his coauthors, Richard Lester (professor, nuclear science and engineering and director of the MIT Industrial Performance Center) and Edward Cunningham (doctoral candidate, political science), found that most of the new plants have been built to very high technical standards, using some of the most modern technologies available (Figure 3). 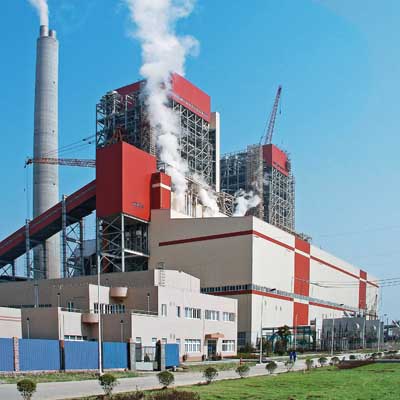 3.    China’s power plants. An August 2008 Massachusetts Institute of Technology survey of 85 Chinese power plants (a majority of which were coal-fired) found that the country’s air-pollution problems have less to do with the technologies employed and more to do with how the energy infrastructure is operated and the types of coals being burned. But China is making progress, the researchers found. Several new large-scale units have come on-line with higher steam conditions. An example is this coal plant in Waigaoqiao, near Shanghai, which uses a 980-MW Siemens steam turbine and has an efficiency of nearly 50%. Courtesy: Siemens

The problem has to do with the way the country’s energy infrastructure is being operated and the types of coals being burned. New market pressures encourage plant managers to buy the cheapest, lowest quality and most-polluting coal available while idling expensive-to-operate flue gas scrubbers or other emissions control technologies. The physical infrastructure is advanced, but emissions performance ends up decidedly retrograde.

Understanding the realities of China’s energy infrastructure and management is crucial, Steinfeld said, for gaining leverage over the whole gamut of global energy-related challenges. China’s electric power sector is vast — second only to America’s in size — and globally unparalleled in terms of the speed of its growth. "To a significant degree, our planet’s energy and environmental future is now being written in China," he and his two coauthors wrote in a working paper. Findings from the research were recently published in The China Economic Quarterly.

Steinfeld said that, at present, the Chinese government lacks reliable data on how the nation’s power plants are built and operated. Officially available data tend to be collected haphazardly and often by local authorities who have a vested interest in the outcomes.

The findings also suggest that, contrary to what many outsiders believe, the Chinese state has substantially improved its ability to implement and enforce rules on technology standards. It has been slower, however, to develop such abilities for monitoring the day-to-day operations of energy producers.

In some respects, the situation is more amenable to change than many people had assumed, Steinfeld said. With expanding regulatory capacity and increasingly sophisticated efforts to regulate through market-friendly pricing mechanisms, reformers could achieve change relatively quickly, he said.

"At least the technology — the physical infrastructure of China’s energy system — is not an impediment," he said. Indeed, it can ultimately prove a key asset for achieving better environmental outcomes.

Since coal quality is one important leverage point, "some new regulatory efforts probably need to be focused on the mines and coal markets," Steinfeld suggested. "That’s the kind of question that this research begins to allow you to address."