An integrated matrix of 10 high-power flywheels built and tested by Beacon Power Corp. earlier this year successfully absorbed and supplied a full megawatt of electricity, the energy storage technology company said in September. The achievement could mean that grid regulation using efficient energy storage is close to commercial deployment.

The flywheel system, called the Smart Energy Matrix, essentially functions like a kinetic or mechanical battery, providing energy that is instantly available when needed. It draws electrical energy from a primary source, such as a utility grid, and stores it in flywheels spinning at speeds higher than 20,000 rpm. Upon power loss, the motor driving the flywheels acts as a generator, supplying power to the customer’s load, or the grid. 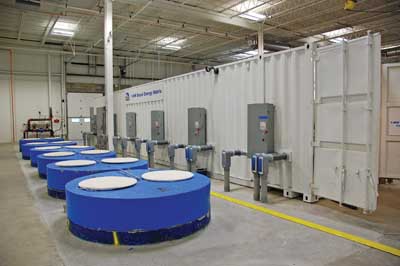 2.    Setting the flywheels in motion. Beacon Power Corp.’s engineering and production team stored and returned 1 MW of electricity through an integrated matrix of 10 flywheels in Tyngsboro, Mass. The achievement is a milestone that could bring the use of energy storage for grid regulation closer to commercial deployment. Courtesy: Beacon Power Corp.

Until now, Beacon had been building and running individual flywheels in preparation for its first full megawatt implementation. Testing of an integrated matrix of 10 flywheels at the company’s Tyngsboro, Mass., headquarters has now shown that its 1-MW Smart Energy Matrix can ramp up and down to absorb and supply a full megawatt of power, it said.

Now Beacon plans to test the flywheel matrix with grid operator ISO New England to monitor how it will respond to actual ISO test signals to absorb and supply power. If the test is successful, Beacon hopes to interconnect the matrix to the grid and begin performing frequency regulation services under an ISO New England Alternative Technologies Pilot Program, which is scheduled to start on Nov. 18. That program, which was unanimously approved by ISO New England and its members, received formal approval from the Federal Energy Regulatory Commission on Sept. 15, 2008.

The ISO New England Alternative Technologies Pilot Program, which was announced in September, will provide revenue for regulation services until permanent market rules have been developed. This process is expected to take approximately 18 months.

Meanwhile, Beacon plans to build and test up to 5 MW of flywheel-based regulation capability.