Remember the slogan, "Never trust anyone over thirty?" Chances are you’ve joined the ranks of the over-thirty generation and are dealing with your own personal "maintenance" issues—not unlike the fleet of generators at larger U.S. power plants, whose average age is about 30. Given the continuing growth in U.S. electricity demand and the cost and difficulties of building a new coal-fired plant, it’s safe to conclude that our existing coal-fired fleet will be with us for some time to come. An aging Mickey Mantle quipped, "If I knew I’d live so long, I would have taken better care of myself." Likewise, the utility industry needs to pay closer attention to generator maintenance to ensure the future viability of these "middle-aged" plants.

A significant proportion of the existing U.S. coal-fired fleet has generators whose stators are directly inner-cooled by hydrogen. With three decades of experience operating these generators now under its belt, the industry has identified several fleetwide chronic maintenance problems that can result in extended unplanned outages and significant lost-generation and repair costs. Portland General Electric’s (PGE) Boardman Power Plant has experienced these problems first-hand. But rather than yield to the temptation to make a quick fix, Boardman sought a permanent solution to the nagging problems.

The long road back

The single-unit, coal-fired Boardman plant, which celebrated its silver anniversary this year, looms over the high desert of eastern Oregon. Westinghouse Electric supplied the frame 2-105 x 245 generator, each of whose stator bars is directly cooled by hydrogen through a single tube stack (Figure 1). The generator has the following nameplate ratings at 60 psig H2:

During the first few years following its commissioning, the Boardman plant was operated on a very limited basis, and it essentially didn’t operate at all between 1986 and 1988. The plant didn’t reach a 40% capacity factor until 1990. But even during those early years, the following generator problems began to become apparent:

Beginning in the late 1990s, the changing economics of power generation dictated that PGE run Boardman as a baseload unit. With a shift in operating mode, the utility began to make investments in the plant to maximize its output. PGE first retrofit the low-pressure turbines, increasing the generator’s output to 626 MVA. Then, in the spring of 2004, the utility retrofitted Boardman’s high-pressure turbine, upping the output to 676 MVA. At that point, PGE realized that it made no sense to put more money into uprates before permanently solving the four known generator problems. The solution would be costly, but the payback would be significant—long-term, reliable operation of the plant at a much higher output.

The entire generator overhaul project (with the exception of an upgrade of the excitation control system) was awarded to Alstom Power Inc. (Richmond, Va.). Following are descriptions of the work that Alstom did.

Rewinding the generator rotor. As part of a complete rewind, Alstom installed new class F insulation and 18-18 retaining rings and repaired cracking in the rotor’s tooth tops with a short-ring modification. Westinghouse recommended the use of the class F insulation based on its studies of the effect of uprating on rotor operating temperatures.

The rotor was rewound at Alstom’s Richmond service center. After removing the retaining rings, Alstom performed MT (magnetic particle testing) at the rotor’s tooth tops to check for cracks. The inspection found linear indications of cracking outboard of the snap ring groove at 51 of 72 locations at the drive end (DE), and at 26 of 72 locations at the non-drive end (NDE). Also found were a few indications of cracks inboard of the snap ring groove.

Engineering evaluation of the inspection determined that Alstom’s short-ring modification would remove all of the indications and prevent any future cracking problems. The short-ring mod entailed removal of material susceptible to cracking from each side of the tooth top (Figure 2). The few indications of cracks inboard of the snap ring groove were very shallow and were removed by increasing the radius under the tooth top. 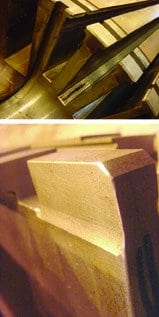 2. Cracked tooth repair. Machining of the tooth tops removed potential crack propagation sites by removing the material susceptible to cracking at the tooth top. The photos shown were taken before (top) and after (bottom) the machining was completed. Courtesy: Alstom Power 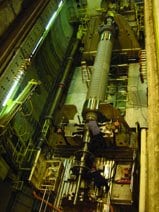 3. Rotor prep. The rotor was balanced before the generator was reassembled Courtesy: Alstom Power

One of the project’s requirements was to retain the existing exciter housing. Doing so required modifying it to allow proper air flow for cooling the slip rings and brush rigging, adding inlet and outlet air louvers with filters, and mounting a circulating fan on the slip ring shaft. The new brush rigging features Alstom brush holders that allow the brushes to be inspected or replaced while the generator remains in service.

Retightening the stator core. The original plan for this part of the project was to torque the hex nuts on the ends of the stator’s through bolts and building bolts. But Alstom technicians found that friction between the bolts, hex nuts, and washers made it difficult to precisely control the amount of tension applied. Alstom also was concerned that twisting the bolts might damage their insulation. So the decision was made to replace the hex nuts with hydraulic nuts (Figure 4). Hydraulic nuts were chosen for two reasons: They are easily accessible for future retightening, and the tension on each bolt can be precisely set by controlling the pressure applied to its nut. 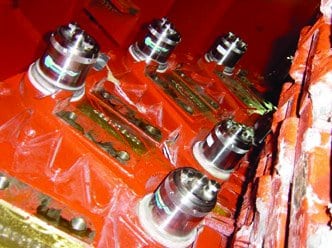 To determine the proper tension for the bolts, Alstom began by setting a nominal value for the interlamination contact pressure, based on company standards. The total force applied to the stator laminations was calculated by multiplying this pressure by the stator core’s cross-sectional area. This total load then was divided by the number of through bolts and building bolts to determine the nominal bolt tension.

The existing through-bolt hex nuts at the stator’s NDE were replaced with hydraulic nuts in groups of four to ensure that the core did not lose compression. After mounting all of the hydraulic nuts, the through bolts were tensioned in three steps, starting at 80% of the final value. A waiting period between the steps allowed the core to settle, ensuring maintenance of final bolt tension levels.

Following replacement of the through-bolt hex nuts with hydraulic nuts, the building-bolt hex nuts at the stator’s DE and NDE were replaced using a similar procedure, but with different tension specs. Because these building bolts are fixed to the frame at the center of the stator, each half of the building bolt tightens half of the core length. After the hydraulic nuts were installed on the bolts at the NDE and DE, they were tightened to 100% of the final value. Final electrical testing of the through bolts, and EL-CID (Electromagnetic Core Imperfection Detection) testing of the stator core revealed no problems.

Designing a new endwinding support system. The new system was intended to minimize endwinding vibrations resulting from plant power uprates and increased MVAR loading. In 1997, PGE studied the problem and concluded that vibration levels would increase to unacceptable levels if the Boardman plant’s output was uprated further.

To solve this problem, PGE asked Alstom to design a new endwinding support system that could do the following: 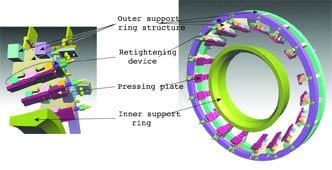 Alstom’s initial inspection of the stator winding found it to be in relatively good condition. Visual inspection of the winding heads detected some areas of "greasing" and partial discharge on both the DE and NDE. There also were some broken ties on spacer blocks. Electrical tests similarly showed the stator windings and insulation to be in generally good condition. A Transposition Voltage Comparison Test detected a broken strand in the bottom coil of slot #35, but PGE determined that it was a manufacturing defect. Finally, a Vent Tubes—Vent Tubes Resistance Test found two "floating" tubes in the bottom bars of slots #2 and #31. These were repaired by installing a new resistor on slot #2 and by re-soldering the resistor connection on slot #31. All other initial testing found no problems with the stator winding that required attention.

Assembly of the new endwinding support system began with installation of the inner support rings. Layers of epoxy-impregnated glass and polyester felt were applied to the rings’ outside surface to serve as a conformal layer and provide a good mechanical bond between each ring and the surface of the windings. The outer support ring structure then was assembled in place and centered on the winding head. With temporary tooling holding the ring structure in place, the tightening devices were assembled between the support plates and the winding heads. Layers of glass and polyester also were applied between the pressing plate and outside of the winding head.

The final step of the assembly process was to install the phase rings at the NDE of the stator by securing them to the brackets (Figure 6). Connections then were made to the existing phase bars by means of parallel copper plates brazed to either side of the phase ring ends and soldered to the phase bar strands. 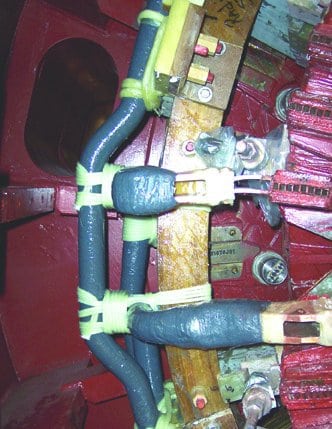 6. Holding on. Brackets for mounting the phase rings were installed on the outside of the outer support ring structure. Courtesy: Alstom Power

With the assembly complete, the next step was to heat-cure all of the epoxy in the support system. As part of this process, it was critical to maintain constant pressure on the winding head. This was accomplished by means of special tooling installed against the inner support rings and on the retightening devices.

Bump testing was performed after the heat curing was complete. The NDE results were very good, indicating no excitable vibration modes within the 110-Hz to 140-Hz range (Figure 7). Several 6-node modes did show peaks in this range, but they did not cause concern because they are not easily excited by the 120-Hz forcing frequency of the machine.

After the successful completion of final electrical tests on the support system, the Boardman plant’s generator was reassembled. The plant then was brought back on-line and closely monitored for any operational problems. No significant problems were detected.