Southern California Edison’s (SCE) 2,250-MWe San Onofre Nuclear Generating Station (SONGS) recently took receipt of a new and upgraded generator rotor for one of its two Alstom steam turbine generator units (Figure 1). Following the successful installation and flawless start-up of this new rotor in the Unit 2 generator, the former Unit 2 rotor was transported to Alstom’s workshop in Richmond, Va., for refurbishment and rewinding. The refurbished Unit 2 rotor was then shipped back to California and installed in the Unit 3 machine during the plant’s fall 2008 refueling outage. Following this second rotor switch and the successful return to service of Unit 3, the original Unit 3 rotor was packed for long-term storage and is being retained on site as an emergency spare. 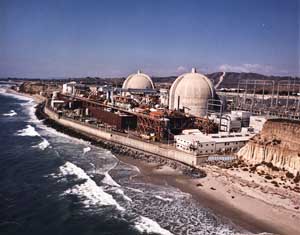 According to SONGS Project Manager Fred Simma, "Moving parts age and wear out. Our SONGS generators are more than 25 years old, and since the average life of a large rotor is about 20 to 25 years, we have to be mindful of reliability."

The SONGS Unit 3 generator rotor electrical performance had degraded over the years and was showing increased vibration, particularly with step increases in April and October 2003 caused by severe grid disturbances. Various options were considered, but the most cost-effective solution was to purchase a replacement rotor for Unit 2 and subsequently refurbish and rewind the Unit 2 rotor for installation into Unit 3.

The rotor purchase order was released in 2004, which initiated a series of manufacturing steps that spanned the globe. The rotor forging was manufactured in Japan; then shipped to Birr, Switzerland; then Stafford, England; then Richmond, Va.; and finally to San Clemente, Calif., for installation.

The rotor forging was manufactured by Japan Steel Works Ltd.’s facilities on the island of Hokkaido over the first 18 months of the project (Figure 2). In late spring 2005, the rotor forging was shipped to Alstom’s facilities in Birr for machining (Figure 3). In the winter of 2005, the rotor was then transported to Alstom Power in Stafford for installation of the windings, using the latest advances in insulation material for consolidated coil technology (Figure 4). 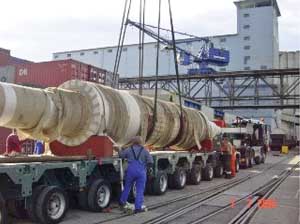 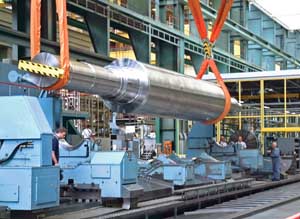 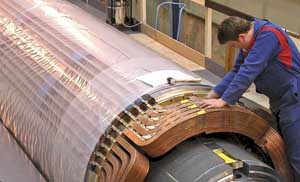 The new Alstom replacement rotor was able to provide SCE with numerous enhancements over the existing plant equipment as a result of design and material developments and improvements in computerized design tools since the original equipment had been supplied.

The new rotor was manufactured from a higher-material-strength steel forging than was previously achievable, and slight changes were made to various shaft machining features to enable improved stress distribution characteristics. One example of this was where the use of modern three-dimensional finite element analysis tools enabled an improved retaining ring – to – rotor body shrink interface and more effective damper circuit to be developed. The improved design, using Alstom’s consolidated coil technology, provided increased mechanical and dielectric strength of the rotor winding insulation components and provided SCE with an additional balance plane and differential expansion measurement facility.

In the summer of 2006, the rotor was shipped to Portsmouth, Va., for delivery to the Alstom Service Workshop facility in Richmond for final detailed work. Shipping a partially completed generator rotor weighing nearly 200 tons across the ocean was anything but simple. The rotor, plus a 20-ton container, was shipped to the U.S. on a roll-on/roll-off ocean-transport vessel.

Alstom had originally planned to transport the rotor across the port from Portsmouth to Newport News, Va., via a floating crane, but decided that too much risk was involved. Instead, the rotor was very slowly and carefully slid onto a rail car with a "jack-and-slide" system. GPS impact recorders were installed on the rotor’s container in order to help continually track the location of the car and detect any impacts the flat car may have experienced. The rotor arrived safe and sound at the Richmond facility and was unloaded by the facility’s 275-ton crane.

Over a six-week period, Alstom’s turbine and generator services performed prebalancing, machining, final testing, and high-speed balancing. "We had seen the specifications," said Jim Donnelly, Alstom project manager, "but you don’t realize how big it is until you see it in real life. We often service 40-, 50-, and 60,000-pound rotors, so this was much more of a challenge." 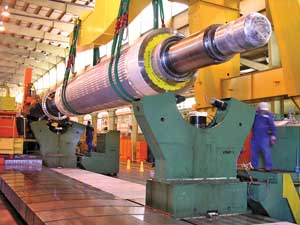 The next phase involved millwork: a combination of drilling and tapping coupling drive pinholes and installing adapter plates, along with the installation of 54-inch- and 76-inch-diameter fan hubs and blades. After more lathe work, the rotor was placed in the balance pit for balancing, overspeed testing, and two heat runs (Figure 6). After final run-out measurements and checking, the rotor was packed for long-term storage and carefully placed back on the rail car. 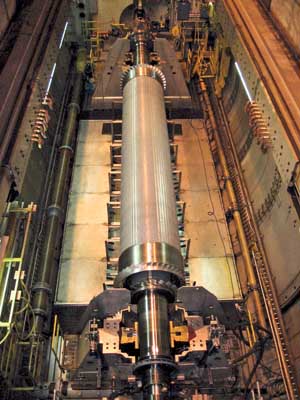 In early fall 2006, the rotor was transported by rail flatcar via CSX to Louisiana, where it was shifted to Union Pacific. A surveyor accompanied the rotor to help ease the transition in the rail yards and make sure it was safely delivered to the plant (Figure 7). 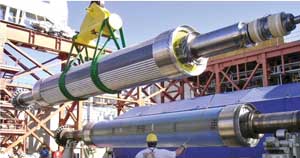 7. Home at last. The new generator was delivered to SONGS Unit 2. The Unit 2 generator shaft was sent to Alstom for refurbishment prior to installation in Unit 3. The old Unit 3 shaft will be kept on site as an emergency replacement. Courtesy: Alstom

On Monday morning February 25, 2007, the Richmond service facility received a special heavy rail delivery: the second SONGS generator rotor. Its arrival kicked off Phase 2 of the project. The SONGS rotor had traveled for 31 days by rail from the Southern California coast, through Chicago, all the way to Richmond.

The magnitude of this project was enormous, as the SONGS generator rotor is not a standard run-of-the-mill component. The 1,200-MWe, four-pole rotor was over 54 feet long, weighed 180 tons, and had been in operation at SONGS for the past 25 years. The generator refurbishment took five months to complete at the Richmond facility. 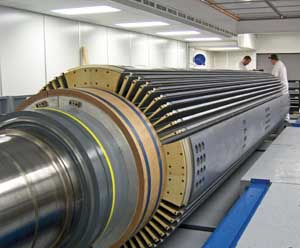 The rotor was rewound using Alstom’s consolidated coil technology field winding and incorporating all of the other design enhancements and improvements that were applied to the new rotor that were possible to provide the customer with considerable advantages over the original machine design.

After NDE revalidation, the reused shaft-mounted components were refitted, a new coupling was installed, the rotor was balanced, and overspeed was tested, including thermal stabilization runs and various electrical tests (Figure 9). Upon completion of testing, the rotor was painted and packaged for return to SONGS, where it was installed in Unit 3 during a scheduled refueling outage in fall 2008. The old Unit 3 rotor is stored at a nearby facility as an emergency spare. 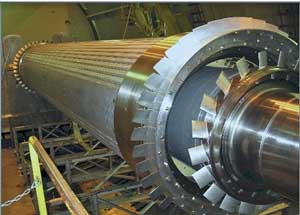 9. Final exams. Thermal and overspeed tests were performed on the refurbished Unit 2 generator rotor prior to shipment back to SONGS. Courtesy: Alstom

"The success of this project was the result of understanding the customer’s needs," said Larry Garcia, director of fleet services for Alstom. "Detailed planning was also essential, and by working with the customer and understanding what they wanted, we were able to successfully manufacture and install a new generator rotor that fulfilled all of their requirements. The detailed design review process, focus on quality, and the use of dedicated teams from Alstom and SONGS enabled meticulous planning, preparation, and execution of the new rotor supply. These same principles were applied to the Unit 2 rotor refurbishment that, with the new rotor experience fresh in everyone’s minds, led to an equally successful project."