T/P92 is being heralded as a superior and lower-cost alternative to T/P91 for new power plants with pressures above 3,600 psi and temperatures above 1,100F—such as the supercritical and ultra-supercritical units proposed to be built in the U.S. over the next few years. The switch from T/P91 to T/P92 would represent the next step in an evolution.

In the early 1990s, T/P91 began to replace T/P22 as the material of choice for high-energy piping in U.S. power plants. T/P91’s higher allowable stress enabled engineers to design pipes with much thinner walls, saving plant owners a substantial amount of money in materials costs as well as reducing the bill for fabricating and installing the piping. And T/P91’s higher creep-rupture strength allows piping made of it to survive higher temperatures and pressures than piping constructed of T/P22. T/P91 also has higher corrosion-oxidation resistance than T/P22.

The popularity of T/P91 grew so quickly that it became the preferred material for high-temperature steam systems (>1,000F) in a majority of U.S. combined-cycle power plants built in the 1990s. It is currently used as pipe material for main steam and hot reheat piping as well as for tube material in heat-recovery steam generators (HRSGs).

With the exception of the modulus of elasticity, T/P92’s mechanical properties are superior to those of T/P91, especially at temperatures above 1,100F. Accordingly, the use of T/P92 instead of T/P91 in new coal plant design and construction should yield benefits similar to those produced by the switch from T/P22 to T/P91.

Following the successful use of T/P91 in the international power industry in the ’90s, engineers began looking for a new material capable of handling the even more severe steam conditions (T>1,100F, P>3,630 psig) of supercritical and ultra-supercritical units in Japan and Europe. A major drawback of T/P91 is that its allowable stress falls precipitously at very high temperatures, to about 7,300 psi at temperatures above 1,100F. To withstand the extreme pressures of supercritical plants operating at such high temperatures, piping made of T/P91 would have to be at least several inches thick.

In Japan, the standard STBA29-STPA29 was developed for this purpose. In Europe, X10CrWMoVNb9-1 was developed as the European equivalent to STBA29-STPA29. In the U.S., the standard that T/P92 meets is Code Case 2179-3 of the American Society of Mechanical Engineers'(ASME’s) Boiler and Pressure Vessel Code for Sections I and VIII, Division 1 construction. Whereas Japan and Europe have been using their equivalent of T/P92 since the 1990s, the U.S. is just now beginning to consider using T/P92 in steam systems of the next generation of coal-fired supercritical and ultra-supercritical power plants. T/P92 also is on the verge of replacing T/P91 in some HRSGs.

As Table 1 shows, the chemistry of T/P92 is very similar to that of T/P91; the key exceptions are the presence of tungsten (W), and less molybdenum (Mo) in T/P92. Table 2 lists the important physical properties of T/P92.

Because the chemistries of T/P92 and T/P91 are very similar, so are their metallurgical properties. The same properties that give T/P91 its strength give T/P92 its strength, and those properties are a function of the steel’s microstructure. As with T/P91, the microstructure of T/P92 is sensitive to chemistry and heat treatment, cold working (although not as much as with T/P91), and the material’s fabrication environment.

Cold working. For T/P92, the level of cold strain that can be achieved before requiring normalization and tempering of the component is about 20%.

Fabrication environment. As with T/P91, the environment in which T/P92 material is fabricated must be controlled. If the material is post-weld heat-treated at a low enough temperature (undertempering), it can become susceptible to stress-corrosion cracking (SCC). That susceptibility can be even more pronounced if the environment is not clean and dry. T/P92 can be susceptible to SCC in the as-welded state as well. If enough time elapses between the welding of T/P92 and its heat treatment (especially in damp environments), its susceptibility to SCC increases as well.

EPRI began the first research program on the weldability of T/P92 in 1990; efforts by many research groups in the U.S., Europe, and Japan followed. Since then, T/P92 has been welded successfully by all common processes, including gas-tungsten arc welding (GTAW), submerged arc welding (SAW), and shielded metal arc welding (SMAW). Although these are the same welding processes used to join T/P91, the difference in welding T/P92 has to do with the development of suitable welding consumables.

As with T/P91, the welding of T/P92 is just as sensitive to chemistry, heat treatment, and environment as its fabrication. The chemistry of the weld material is one of the most influential factors in maintaining the original material strength. There are five elements that have the largest effect on weld properties:

There are other elements that need to be carefully monitored for their effects on weld properties. Tungsten should be carefully introduced in the filler metal to avoid local delta ferrite areas. Titanium and aluminum also should be monitored due to their influence on nitride formation.

The procedure for welding T/P92 is typical of that for ferritic steels with a chromium content of 9% to 12%. The figure shows how to weld T/P92 to T/P92. The process can either use GTAW—with tungsten-inert gas (TIG) wire—for the entire weld (for T92) or GTAW (TIG) for the root pass and SAW or SMAW for the filler passes (for P92). For dissimilar-metal welding (DMW), the composition of the joining material must be taken into consideration. The preheat, weld interpass, and PWHT temperatures are the same for both P91/P92 and Austenitic/P92 welding processes. The difference is in the cooldown temperature/rate of cooling. 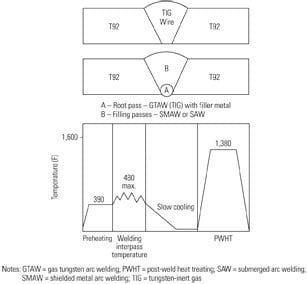 Note that, when performing DMW, the filler material must be chosen carefully, to minimize carbon-migration between the base metal and the filler metal. This might not be a problem when welding T/P91 to T/P92, but it could be a possibility when joining T/P92 to other materials, such as P22 or Austenitic material.

The answer to this question depends on your perspective, as the following three demonstrate.

Owner/engineer. From an owner/engineer’s viewpoint, there are two factors that need to be considered when determining the type of piping to use on a project—especially the piping of high-energy systems such as main steam and hot reheat. The first is potential cost savings, and the second is delivery schedule (that is, which type of pipe can be delivered to the project site more quickly).

In terms of cost savings, the two key variables are pipe wall thickness and the required amount of pipe rack/support steel. Regarding the first, T/P92’s higher allowable stress makes thinner pipes feasible, and that translates into lower materials costs. Because thinner pipes weigh less, using T/P92 in lieu of T/P91 also reduces the size (and costs) of required pipe hangers and support steel.

The two (interrelated) factors that determine the relative availability of T/P92 and T/P91 are the number of steel mills producing the pipes and the size of the piping needed. For example, smaller-bore piping (<16 in.) is both more available and potentially has a shorter delivery time to the fabrication shop than larger piping. If seamless pipe is required for the project, its availability may be affected by the number of extruders each steel mill has as well as by the number of mills available with extruding capability. Due to the popularity of T/P91, delivery times for large-bore piping (>16 in.) are typically one year or longer.

Fabricator. From a fabricator’s viewpoint, the two key factors in the choice of T/P92 or T/P91 have to do with welding and heat-treating considerations.

As mentioned earlier, because the welding processes used for T/P91 are directly applicable to the welding of T/P92, fabricators should not have to negotiate much of a learning curve. However, they may find it difficult to procure suitable welding material for the newer steel. In Europe, there’s no shortage of companies producing consumables for most popular welding processes. But in the U.S., there currently is no classification in American Welding Society (AWS) codes for T/P92 base materials for stick-welding purposes.

Field erector. From a field erector’s viewpoint, there is little significant difference between the erection of T/P91 and T/P92. Because of the similar metallurgy, the welding and heat-treatment processes will be virtually identical.

In terms of welding, any welder qualified to weld T/P91 should be able to qualify to weld T/P92 with little difficulty. As during fabrication, additional cost savings (involving welding preheat, PWHT, and filler metal) may be realizable during field erection of thinner-walled T/P92 pipe.

As T/P92 begins to make inroads in the U.S. its long-term success will require the following:

—P. Jason Dobson, PE, is a mechanical engineer with the consultancy Cummins & Barnard Inc. (Ann Arbor, Mich.). He can be reached at 734-332-6409 or PDobson@cummins-barnard.com.