This plant’s staff proves that a can-do attitude and high productivity can be compatible with a safer workplace. The proactive approaches they used at the 162-MW Hutsonville plant ranged from improving boiler efficiency to better managing risks to workers.

One of the greatest challenges facing the U.S. electric generation industry is reconciling the dual imperatives of profitable business practices and strong workplace safety. The dedicated staff at the Hutsonville Power Station (Figure 1), located in Hutsonville, Ill., have taken on this challenge and successfully worked together to increase their facility’s efficiency while looking out for their fellow workers. 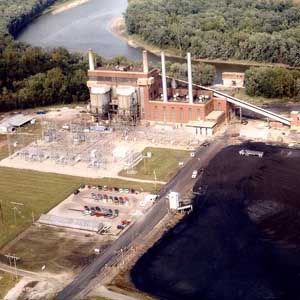 Every day the close-knit group of employees at the Hutsonville plant demonstrate their leadership skills in the safety arena by articulating and acting on their strong belief in the importance of workplace safety — and then being held accountable for the results.

In May, along with the 2009 ELECTRIC POWER Conference and Exhibition held in Rosemont, Ill., the PRB Coal Users’ Group (PRBCUG) conducted its annual meeting. Each year the group recognizes one or two PRB Coal Plants of the Year for their innovation and implementation of "best practices and best available technologies." (See also the large plant profile on p. 46.) These plants are inducted into the Power Plant Hall of Fame. Selections are made by the board, with input from the group’s members. PRBCUG members include current and prospective users of PRB coals. Associate members from companies supplying coal, equipment, or services also participate in the selection process.

Bob Taylor, former PRBCUG chairman, presented the award to members of the Hutsonville staff at the 2009 PRBCUG Awards Banquet in May. He pointed out that this was the first year that Ameren’s Hutsonville Power Station had been nominated.

"Ameren’s Hutsonville plant is a smaller plant in size and one with a huge heart," Taylor told POWER in an interview in August. "They are a story of family. Whenever faced with uncertainty — first by the need to be price competitive in the changing market and, more recently, the whole discussion of where our industry is headed — they responded with the cohesiveness of family and plowed forward, always taking care of each other, their families, and business. They share a remarkable story of how to improve and make change and make it look simple."

He listed the top reasons that the Hutsonville plant was selected PRBCUG Plant of the Year in the small plant category: 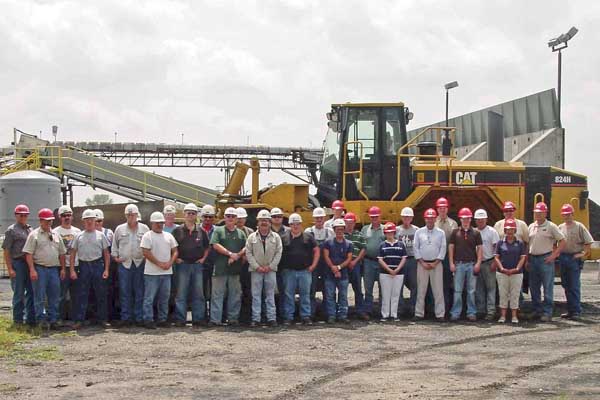 2.    The power behind the power. The reasons for the plant’s success: the employees of Hutsonville Power Station. Courtesy: Ameren

In his interview with POWER in August, Greg Musch, the production superintendant at Hutsonville, described the operations of the 162-MW intermediate-load PRB coal facility. "The first unit at Hutsonville went online in 1940, followed by the second in 1941" he said. "Later, the 80-MW Unit 3 went online in January 1953, and the 82-MW Unit 4 went online in May 1954. Units 3 and 4 are GE turbines/CE tangential-fired boilers. In 1981, Units 1 and 2 were retired."

"Currently, there are 57 employees at the site," he said. "We have four operators and one supervisor per operating shift. That breaks down to three 8-hour shifts per day, seven days per week. In contrast, the coal-handling operations are different: two employees per shift with a single 12-hour shift per day, seven days per week. Finally, all support functions (maintenance, engineering, and administration) are normally carried out by our employees from Monday through Friday from 07:00 to 15:30."

The plant’s performance numbers are presented in the table. 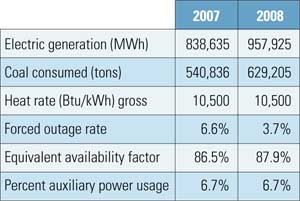 The first delivery of PRB coal to the Hutsonville plant occurred on September 20, 2004. It was used in a blend of 25% PRB and 75% bituminous coal once the Illinois Environmental Protection Agency (IEPA) permit requirements were met.

"The sulfur emission credit price escalation was one of the main driving factors that lead us to consider fuel flexibility options to keep the plant competitive," Musch said. "We petitioned the IEPA to include PRB fuels and blends in the plant’s operating permit prior to the changeover. In addition, we conducted unit particulate discharge stack tests on both units per the IEPA directive, which was part of the permit."

Before the switch to PRB coal, Hutsonville used high- and medium-sulfur bituminous coal from Illinois and Indiana. Currently, the plant is using 100% PRB coal.

Musch explained the timetable involved in transitioning to PRB coal at the plant:

Musch elaborated on the new fuel-handling challenges that plant employees faced after the switch to PRB coal. The first was controlling dust while still utilizing existing coal-handling conveyors, transitions, and coal-crushing equipment, he explained. The use of surfactants, water spray, sealed conveyor transitions, electrical system modifications, and an aggressive cleaning schedule permitted the safe handling of PRB fuel prior to a full coal yard equipment upgrade (Figures 3 and 4). 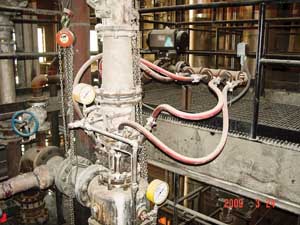 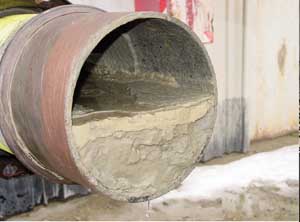 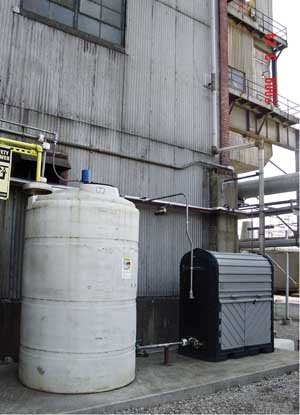 "The training and education of plant staff on the safe handling of PRB fuel and the hazards associated with it was, and still is, a high priority," he said (Figure 5). "The staff in the engineering department, the coal yard operations, and the mechanical maintenance department took the challenge of adding temporary measures to control dust to acceptable standards while plant equipment was upgraded." 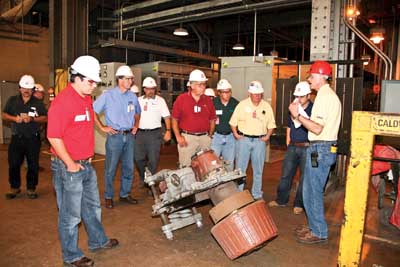 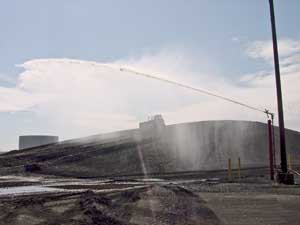 6.    All wet. Dust control in the coal yard is accomplished by self-pivoting irrigation-type sprinkler heads, which provide coverage of a more than 250-foot radius. Courtesy: Ameren

"Boiler wall blowers and long lance sootblowers were replaced with new, easier-to-maintain equipment," he said. "Acoustic horns were added to the backpass horizontal tube bank sections as well as the electrostatic precipitator inlet and outlet turning vanes within the boiler gas ducts."

Due to the properties of PRB fly ash, annual explosive cleaning is now required to clean the backpass horizontal tube bank sections of the boiler to remove accumulated fly ash.

Due to the increased volatility of PRB coal, the Hutsonville plant had to make some changes to workplace safety practices, Musch said. Here are the adaptations he mentioned:

"The Hutsonville plant made changes to its regular fire hazard inspections due to the increased volatility of PRB coal compared to other types of coal," he said. "Our plant added new procedures as part of the fire detection and suppression system. We also implemented weekly and monthly inspections of coal-handling equipment for operating permit requirements and safe operations."

Musch noted that during the interview process for the PRBCUG awards, he gained valuable feedback that the plant used to improve the safe and efficient operation of the station. "The recommendations from the members of the PRBCUG review committee included improvements in machine guarding, fire suppression practices, and machine emergency stop enhancements," he said.

Musch pointed out that the Hutsonville plant also had to make some changes to its regular housekeeping duties as a result of switching to PRB coal:

The Plant’s Formula for Success

As more power plants follow the example set by award-winning facilities like Hutsonvillle, the trend toward smarter ways of handling jobsite risks should produce positive, long-lasting results for workplace safety.

Kudos from our POWER team to the management and staff of Ameren’s Hutsonville Power Station for being named the 2009 PRBCUG Small Plant of the Year.

For further information on the Hutsonville plant or its improvement projects, please contact Greg Musch, production superintendent, at 618-563-1352 or gmusch@ameren.com. Additional information on the PRBCUG and its awards program is available at www.prbcoals.com.