Hard work was required at the 2,600-MW Rockport Plant to make improvements to equipment, materials, and processes. But that hard work has paid off: The plant’s units operate much better, employee safety has improved, the facility is setting generation records with both of its 1,300-MW units, and it earned the PRB Coal Users’ Group Large Plant of the Year honors.

"A pessimist sees the difficulty in every opportunity and an optimist sees the opportunity in every difficulty," Winston Churchill once said. With their upbeat, positive attitude, staff at the Rockport Power Plant in southern Indiana have turned many difficult challenges into opportunities for improvement. Therefore, it’s no big surprise that the Rockport Plant (Figure 1) — operated by Indiana Michigan Power, a branch of American Electric Power (AEP) — was recognized as the Large Plant of the Year at the 2009 Powder River Basin Coal Users’ Group (PRBCUG) Awards Banquet. 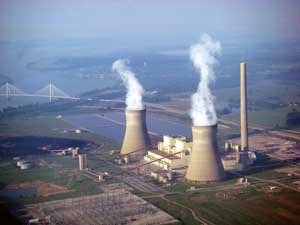 The annual PRBCUG meeting was held in May in conjunction with the 2009 ELECTRIC POWER Conference and Exhibition in Rosemont, Ill. Each year the PRBCUG recognizes one or two PRB Coal Plants of the Year for their innovation and implementation of "best practices and best available technologies." (See also the small plant profile on p. 36.) These plants are inducted into the Power Plant Hall of Fame. Selections are made by the board, with input from the group’s members.

The Rockport Plant, like many others represented in the PRBCUG, wasn’t designed for PRB coal, explained Bob Taylor, former PRBCUG chairman, who presented the award to Rockport Plant representatives at the banquet.

"A fatality from a dust explosion and numerous other experiences caused them to aggressively learn about the characteristics of PRB coals and implement actions for continuous improvements and proactive approaches to protecting people," he said. "Their journey wasn’t easy nor without pain, and now the PRBCUG celebrates their achievement for their pursuit of protecting people and improvements."

This was the first time Rockport Plant was nominated, Taylor pointed out. However, Rockport Plant employees have participated in the PRBCUG from the group’s inception, applying what they have learned from others.

Taylor shared his opinion about the top reasons that the Rockport Plant was selected a winner: 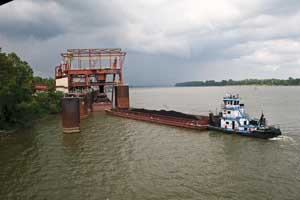 2.    Full load. The motor vessel Rockport is shown moving a barge full of PRB coal to one of two Hyel Patterson barge unloaders. These are bucket elevator–type unloaders that remove coal from the barges in two passes. Coal is dropped onto a series of conveyers that move the coal from the river to the plant. Courtesy: American Electric Power

The Rockport Plant was built as a sister plant to several others that were designed to burn bituminous coal. However, before start-up, the decision was made to burn lower-cost PRB coal, even though few in the company had any experience with this lower-sulfur but harder-to-handle coal. Taylor noted that "The staff at the Rockport Plant had to learn about the characteristics of PRB coal and how to operate accordingly and to do so with a relatively small percentage of experienced personnel. In effect, they had to manage a coal conversion project while operating a new plant."

The plant’s story begins more than three decades ago. Groundbreaking for the Rockport Plant was on August 29, 1977, with the first concrete poured on April 27, 1978. In his interview with POWER in August, Plant Manager Pat Hale described the winning plant’s operations.

"The first barge of coal unloaded off the river was on August 15, 1983," he said. "The steam blow of the Unit 1 boiler occurred on July 3, 1984, and the first coal consumed was on July 10, 1984. Unit 1 was placed into commercial operation on December 10, 1984, and Unit 2 in December 1989. These were the fifth and sixth 1,300-MW units built by AEP. Staffing of these units included transferring some employees from the other four sister units, which brought in expertise in the operations and maintenance of these large units."

Hale explained that Unit 1 is capable of generating 1,320 MWh, and Unit 2 can generate 1,305 MWh. Since the plant began operations, Unit 1 has generated around 200,850,580 MWh of electricity and Unit 2 has generated approximately 181,132,882 MWh. Average generation for the plant for the past 19 years has been 1,7493,075 MWh of net generation. Overall efficiency in terms of heat rate for Unit 1 is 9,460 Btu/kWh and 9,686 Btu/kWh for Unit 2. The table summarizes the plant’s historical operating performance over the past few years.

When POWER asked Hale to describe what makes his power plant special, he replied, "That question is very easy to answer — it is our people. We have a lot of talented and competent employees that contribute to the success of Rockport plant."

Another important group of the Rockport Plant labor force — a total 56 employees — are involved in coal yard operations. The coal yard is operated by four rotating shift teams and a small day group. Each team has a supervisor, three or four coal equipment senior operators, and seven or eight coal equipment operators. The day group has six coal equipment operators or coal handlers, a supervisor, and a process leader. In addition, 21 employees handle the duties of coal yard maintenance. This group has seven welders, two machinists, four mechanics, five technicians, and three supervisors.

The Transition to Using PRB Coal

"The boiler was designed for bituminous coal," Hale said. But "the decision was made prior to initial start-up to burn 100% PRB due to its low cost. Many modifications were made to allow this to happen successfully. Testing began in 1998 with a blend of bituminous coal in an effort to reduce slagging. We are currently using a blend of 87% PRB and 13% eastern coal."

He described the following numerous modifications that the plant had to implement in order to use PRB coal:

One of the key advantages of using PRB coal is that it helps the Rockport Plant reduce harmful air emissions. Hale pointed out that "PRB coal is low in sulfur content, which is good for meeting our SO 2 limit, and high in moisture, which helps the plant meet its NOx targets." The plant also uses activated carbon injection to control mercury emissions (Figures 3 and 4). 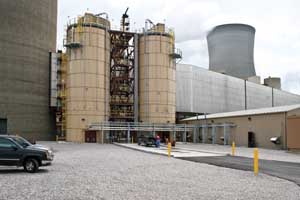 3.    Storing activated carbon. These storage silos contain activated carbon that will be used to remove mercury from the gas stream. The carbon is injected in the ductwork after the air heaters in three ducts leading to the precipitators. As it travels in the gas stream it absorbs the mercury. The ash and the mercury are collected in the precipitators and then taken to a landfill, where it is safely disposed of. Courtesy: American Electric Power 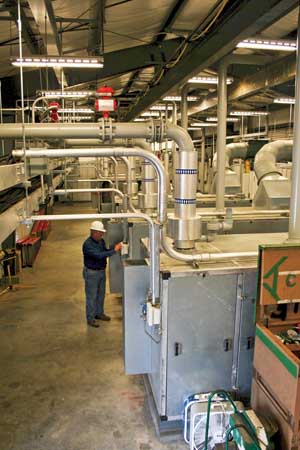 4.    Mercury busters. This equipment building is for activated carbon injection, which is used to remove mercury from the gas streams. The blowers shown are used to transport carbon to the ductwork and distribute it equally across the three ducts. The building also contains air compressors and air dryer for operating pneumatic controls. Courtesy: American Electric Power

Hale discussed how Rockport Plant personnel had to deal with new fuel-handling challenges after deciding to use PRB coal. Even with the initial modifications to the boiler, the staff had trouble getting coal to the unit initially when only Unit 1 in service. These problems occurred during periods when the coal was wet. Then, prior to start-up of Unit 2, the chutes in the stations from the river to the plant were increased in size; this modification helped to eliminate most, but not all, of the pluggage.

There were also challenges as far as the staff learning the requirements for handling and burning PRB coal, which can self-combust if it is not compacted on the storage pile properly.

Hale said that one of the biggest changes that occurred at the facility was that after the staff determined the optimum blend of eastern and PRB coal, they no longer needed to shoot shotguns at the superheater. "This change occurred in 1998 and has eliminated the need for this practice," he said "Prior to burning the blend we averaged 26,000 shells a month shot at the superheater."

In addition, plant personnel took a proactive approach in dealing with the dust control challenges that come with using PRB coal. From the beginning, they set up a contract with a company that supplied the chemicals and equipment to provide dust suppression from the Ohio River to the plant. In addition, the staff took other measures, such as filling in the beams in coal stations with a slope such that washing down the beams would allow for removal of any coal dust that might accumulate so that it couldn’t collect and combust.

The Rockport Plant also had to implement changes to workplace safety practices due to the increased volatility of PRB coal. Hale said that the staff installed pulverizers with steam inerting properties, which helps prevent mill explosions when coal flow is lost. In addition, the plant implemented the use of a warning tone and rotating beacons in the pulverizer bays and on the burner decks to announce that a mill is about to be placed in service; this practice notifies employees that they should vacate those areas.

Currently, the Rockport Plant is making another improvement in order to deal more safely with PRB coal’s volatile properties. It is replacing the old baghouse-style dust collectors with wet extraction – style dust collectors that eliminate much of the danger of fires and/or explosions. This new improvement has the added benefit of reducing compressed air usage in the coal yard by eliminating any need for compressed air that is required on a baghouse-style collector.

"Another safeguard that the staff installed was carbon monoxide (CO) monitors, which were placed on the ductwork from the conveyor decks to the baghouses," he said. "The air pulled through the ductwork gives early warning of hot or smoldering coal, giving the coal yard time to address it early. The signals from the CO monitors go to the plant PI system such that it can be trended and give annunciator alarms."

Both Rockport units are still using pressurized furnaces, as they do not have scrubbers yet, Hale pointed out. The use of pressurized furnaces creates a housekeeping issue with fly ash and coal leaks that plant personnel have to address by continuously monitoring for casing leaks with the use of IR imaging; they then make repairs during outages.

One new housekeeping improvement at the plant has been the replacement of the coal pipes from the pulverizer to the burner in the furnace with new ceramic-lined pipe between the pulverizer outlet and the burner shutoff swing valve. This modification helps eliminate an erosion problem that has worsened with the blending of PRB and eastern fuel. The ceramic should extend the life of the burner lines and eliminate a housekeeping/fire hazard issue, he explained.

The coal yard staff does routine walk-downs of the coal conveyors to inspect equipment. Prior to leaving at the end of each shift, they will shut down early to do cleaning, which includes washing belts down to eliminate a housekeeping problem and the possibility of the coal getting hot and damaging belts and other equipment.

As stated earlier, Hale attributes the success of the Rockport Plant first and foremost to the fact that the facility has a large number of talented and competent employees. In addition, he emphasized other reasons for the plant’s impressive achievements: