Italy’s Enel said in August that it has successfully begun operating a power plant in Fusina, near Venice, in the Veneto region of Italy, that is fueled 100% by hydrogen. The industrial-sized plant’s building site was officially opened in April 2008, after which infrastructure and technology work was carried out on schedule. Initial testing of the turbine using methane gas was conducted in the spring of 2009, and now — after completion of the special pipeline — the plant has switched to 100% hydrogen fueling, Italy’s largest energy company said.

The Fusina hydrogen plant has a capacity of 12 MW, as well as an additional 4 MW generated through the reuse of heated gas produced by the hydrogen-fueled turbine in the existing Andrea Palladio Fusina plant, a 960-MW coal-fired facility (Figure 4). Enel estimates that the hydrogen plant generates 60 million kWh a year. The hydrogen used to fuel the plant is provided by energy company Eni’s nearby Polimeri Europa cracker, which utilizes hydrogen to run its own plants. It also uses hydrogen produced as a by-product in the manufacturing process at the adjacent petrochemical facility of Porto Marghera. 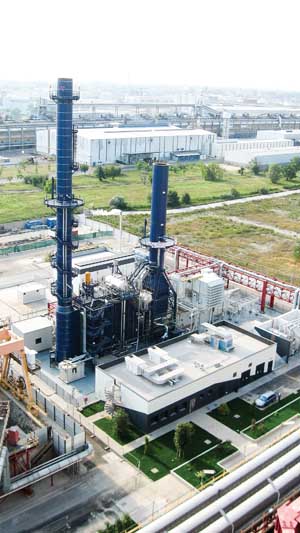 The plant is being touted as "one of a few hydrogen power plants in the world" — but that may soon change. According to Enel, the plant is just one project under the aegis of Hydrogen Park, a consortium formed in 2003 on the initiative of the Venice Industrial Union, which has received about €4 million in funding from the Region of Veneto and the Italian Ministry for the Environment. The consortium seeks to promote the development and implementation of hydrogen technologies in transportation and electricity generation in the Porto Marghera area.

In late August, the California Energy Commission, meanwhile, unanimously approved an application for certification of the 250-MW Hydrogen Energy California Power Project in West Kern County. The approval now starts the year-long certification process. Long Beach – based Hydrogen California International has proposed to build the integrated gasification combined-cycle power plant that will capture and permanently store 90% of its carbon dioxide. If construction begins by 2011 and the plant goes online as anticipated in 2015, it will take petroleum coke, coal, or blends of each; combine them with nonpotable water; and convert them into hydrogen and carbon dioxide. The hydrogen will then be used to generate electricity, while the carbon dioxide will be compressed and piped to the neighboring oil reservoirs and injected for storage to enhance oil recovery.

The project has won $308 million in funding from the U.S. Department of Energy through the American Recovery and Investment Act. The proposed facility will be located on a 473-acre about 7 miles west of Bakersfield. The site is near a hydrocarbon-producing area known as the Elk Hills Field, currently used primarily for agricultural purposes.

Similar plants have also been proposed in Belgium, Spain, and China.