A solar thermal demonstration power plant in Jülich, Germany, that was developed by the German Aerospace Center (Deutsches Zentrum für Luft- und Raumfahrt; DLR), was formally handed over to its future operator, the Jülich Department of Works this August. The solar power plant, developed as a complete system, will now be used as a reference for future commercial power plants. DLR said in a statement that, in particular, the plant will play a major role in the DESERTEC project, the €400 billion proposed project that seeks to establish 6,500 square miles of concentrated solar power plants and high-voltage transmission lines in the vast deserts of North Africa and in the Middle East.

"Of course, the sun does not shine as often in Jülich as in North Africa, but for an experimental power plant in which the technology is to be further developed, having good connections to the research institutes is more important than continuous operation," said Professor Hans Müller-Steinhagen, head of DLR’s Institute for Technical Thermodynamics.

The project consists of 2,153 heliostats with a total area of almost 18,000 square meters that are arranged over about 8 hectares, or 20 acres (Figure 7). Tracking the sun, these concentrate solar radiation on a receiver that is about 22 square meters in size, installed at the top of a 60-meter tower. The receiver is made of porous ceramic elements through which incoming ambient air flows. In passing through the receiver, the air is heated to around 700C. This heat is then delivered to the water-steam cycle in a heat-recovery boiler. The steam generated there drives a turbine, which produces power via a generator. 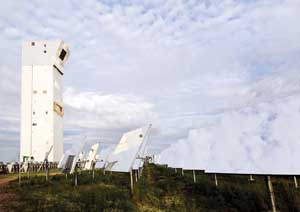 7.     From pillar to post. German Aerospace Center in August handed over a full-system solar thermal demonstration project to a local department of works. It now plans to use the tower to develop commercial power plants for sunny regions in southern Europe and for the €400 billion multi-company solar project in North African and Middle Eastern deserts. This project consists of more than 2,100 movable mirrors that concentrate solar radiation onto the receiver at the top of a 60-meter tower. Courtesy: DLR

The power plant will be rated at 1.5 MW. A heat storage module that extends across two stories of the tower is integrated into the plant. This heat storage module contains ceramic filling material through which hot air flows, and which can thus be heated. When discharging, the process works in reverse: The heat storage module releases its energy so that power can also be produced when clouds pass overhead.

DLR said that it would set up a research platform on one story inside the tower (at about half the height of the tower) to place experiments behind a 3 m x 7 m opening onto which the power plant’s heliostats can be focused. Included among the planned activities are tests for new receivers and experiments on the thermochemical manufacture of hydrogen using solar energy.

The project will be supported by a research program spanning several years, which, as well as providing scientific support for operation of the power plant, will develop methods for optimizing operation, assuring quality, and developing the technology in order to further improve the competitiveness of the facilities. For example, a fully dynamic computer model of the facility will be developed, which is later expected to enable the real-time optimization of operations supported by the model.