Power from the Sun

A good example is Phoenix-based Stirling Energy Systems’ (SES) newly designed solar power collection dishes that were unveiled at Sandia National Laboratories this July. Called SunCatchers, these dishes are the next-generation model of SES’s original system. With a high rate of production and cost reduction, they will be used in commercial-scale deployments starting in 2010.

The modular concentrated solar thermal (CSP) SunCatcher uses precision mirrors attached to a parabolic dish to focus the sun’s rays onto a receiver, or heat exchanger, which heats the engine’s working fluid, in this case hydrogen, and rejects heat at ambient conditions. As the gas heats and cools, the working fluid’s pressure rises and falls. This change in pressure drives the piston inside the engine, producing mechanical power, which in turn drives a generator and makes electricity.

The improved design stems from a collaboration between Sandia’s CSP team and SES. The new SunCatcher is about 5,000 pounds lighter than the original, is round instead of rectangular to allow for more efficient use of steel, has improved optics, and consists of 60% fewer engine parts (Figure 2). The revised design also has fewer mirrors — 40 instead of 80 — and the reflective mirrors are formed into a parabolic shape using stamped sheet metal similar to the hood of a car. 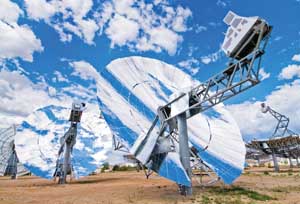 2.     Hydrogen and Helios. Stirling Energy Systems this July unveiled four newly designed solar power collection dishes at Sandia’s National Thermal Test Facility. The next-generation SunCatcher is about 5,000 pounds lighter than the original, is round instead of rectangular to allow for more efficient use of steel, has improved optics, and consists of 60% fewer engine parts. The engine’s sealed system is filled with hydrogen. This model could be in commercial service by 2010. Courtesy: Randy Montoya

Because the mirrors and engines are made by using automobile manufacturing techniques, the improvements will result in high-volume production, cost reductions, and easier maintenance. But it also minimizes land development and has numerous environmental advantages, said Chuck Andraka, the lead Sandia project engineer. "They have the lowest water use of any thermal electric generating technology, require minimal grading and trenching, require no excavation for foundations, and will not produce greenhouse gas emissions while converting sunlight into electricity."

Tessera Solar, SES’s sister company and the developer and operator of large-scale solar projects using the SunCatcher technology, plans to build a 60-unit, 1.5-MW plant by the end of the year either in Arizona or California. SES said that the proprietary solar dish technology will then be deployed to develop two of the world’s largest solar generating plants in Southern California — with San Diego Gas & Electric in the Imperial Valley and with Southern California Edison in the Mojave Desert — in addition to the recently announced project with CPS Energy in West Texas. SES predicts these projects will produce 1,000 MW by the end of 2012.

Power on the Moon

NASA, meanwhile, has been developing and recently completed testing of several fission power components that use a Stirling engine, and which could enable the possible use of nuclear power on the moon and Mars.

A fission surface power system (Figure 3) could use a small nuclear reactor, about the size of an office trash can, and Stirling power generators to produce 40 kW — enough electricity to power a future lunar or Mars outpost. The electricity produced could be used for life support, performing experiments, recharging rovers, and mining resources, researchers said in August. 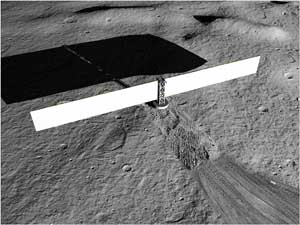 3.     A Stirling idea. An artist’s concept of a fission surface power system on the surface of the moon. The system uses a nuclear reactor—about the size of a trash can, which would be buried below the lunar surface to make use of lunar soil as additional radiation shielding—and a Stirling engine to produce 40 kW. NASA scientists recently completed a test in which the Stirling engines were heated with a pumped liquid metal to replicate how heat could be delivered from the reactor to the converter. Source: NASA

Here’s how the systems works. Inside the reactor is a bundle of small tubes filled with uranium. Outside the reactor are control drums. One side of each drum reflects neutrons and the other side absorbs them, providing a way to control the rate that neutrons escaping the reactor core are reflected back in. To start up the unit, the absorbent side of each control drum is turned out, away from the reactor core, so the reflective material faces in and sends escaping neutrons back in to the core. The resulting increase in available neutrons enables a self-sustaining chain reaction, which produces heat.

The system would use only a miniscule amount of fuel — 1 kg of uranium every 15 years — and still have enough reactivity to run for decades.

A test completed at NASA’s Marshall Space Flight Center, Huntsville, Ala., used Stirling engines that were heated with liquid metal to replicate how heat could be delivered from a reactor to the converter. "[The test] was a major accomplishment on the road to demonstrating technical feasibility of fission surface power," said NASA, who has been developing the system for decades.

"The engines performed flawlessly producing over 2 kilowatts of electricity at a gross thermal efficiency of about 32 per cent with liquid metal temperatures as high as 550 degrees C," said Steve Geng, the Glenn lead for the test.

NASA’s Glenn Research Center in Cleveland, Ohio, developed the data and control system for the test Stirling engines, which were designed and built by Sunpower Inc., an Athens, Ohio – based company. Glenn also designed the Stirling heat exchangers that were fabricated by Mound Advanced Technology Center in Miamisburg, Ohio. The test loop at Marshall included an electrically heated reactor simulator designed by Los Alamos National Laboratory and an electromagnetic pump supplied by Idaho National Laboratory.