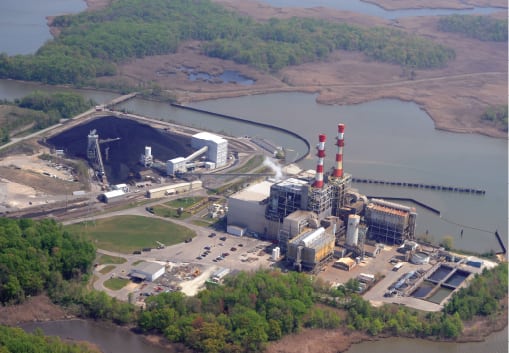 A desire to do things right led Constellation Energy to invest $70 million to convert its 400-MW C.P. Crane Generating Station to burn Powder River Basin coal and develop the culture critical to making that conversion a success. In addition to being named a 2012 POWER Top Plant, the PRB Coal Users’ Group recognized the plant for its efforts with its Plant of the Year Award

In March 2011, Constellation Energy completed a conversion project at its 400-MW, two-unit C.P. Crane Generating Station, allowing it to burn up to 100% subbituminous coal. The project was driven by an effort to comply with Maryland Healthy Air Act (HAA) regulations and resulted in the increased use of subbituminous coal, largely from the Powder River Basin (PRB) in Wyoming and Montana.

The plant was originally developed by Baltimore Gas & Electric Co., which became Constellation Energy, and has been operating as a merchant generator since 2001. The plant is dispatched into the PJM day-ahead market. Crane Unit 2 provides regulation capability, and both units supply reactive capacity. As a condition of Constellation’s 2011 merger with Exelon, the plant—along with two others in Maryland—is being divested for $400 million to Raven Power, a unit of Riverstone Holdings LLC.

In converting the Crane Station to burn PRB coal, “they did it the right way,” said Randy Rahm, president of CoalTech Consultants and executive director of the PRB Coal Users’ Group (PRBCUG). In particular, plant operators and senior executives at the company reached out to the industry for advice and best practices through the users’ group. “They had the PRB Users’ Group involved all the way through,” Rahm said. Operators considered a range of opinions and expert advice and made decisions based on experience and best practices. For these reasons, the PRBCUG selected the C.P. Crane Generating Station as its Plant of the Year and recognized its accomplishments during a banquet at the ELECTRIC POWER Conference in Baltimore in May.

“A major initiative was to clean up around the plant,” said Bill Butler, Crane Station general manager. That involved washing down systems throughout the plant as well as conducting extensive training on how to safely handle the dust-prone and volatile fuel. That training even extended to first responders in the Baltimore fire department.

“You can’t have a lot of coal lying around in the power plant because of its highly combustible nature,” Butler said. To help control dust inside the plant, C.P. Crane relocated its coal crushers from inside the boiler house to the coal yard and added new fine-grind crushers, a crusher building, interconnecting conveyors and structures. The crushing equipment is isolated from primary air ducts and includes carbon monoxide (CO) monitoring systems and a deluge system that can be activated remotely. What’s more, operators began washing down the boiler house twice a year. Coal-handling equipment is washed down daily (Figure 1).

Modifications also were made to ash-handling systems, including segregating air heater hopper material from fly ash and adding a fly ash treatment system to prevent ash from settling during unloading and transport. Altogether, the conversion cost around $70 million and required extensive environmental permitting and planning. Constellation viewed this expenditure as prudent both to protect the generating asset and the personnel who work there. “The company had the desire to make sure we did this right,” Butler said.

Subbituminous coal such as that from the PRB is typically characterized as having lower heat content (about 8,500 to 9,400 Btu/lb), but it typically has a much lower sulfur content (about 0.1 to 0.5 wt% sulfur). Most subbituminous coals have ash characteristics that are compatible with cyclone boilers. The lower sulfur content results in significantly lower SO2 emission rates, as low as 0.4 to 0.5 lb/MMBtu.

As part of the Crane Station conversion, Constellation proposed to change or replace the rail car dumper to allow for longer rail cars with a larger volume of coal to be dumped in the existing railcar dumper building. Subbituminous coal is less dense than bituminous coal, so larger rail cars can be used to transport the higher volumes of coal. As a result, Crane’s rotary railcar dumper had to be modified to handle the larger cars.

Because subbituminous coals typically have lower heat content and higher bound moisture content than bituminous coals, more of it is needed. The existing coal feeders were found able to provide the required higher coal feed rates. After engineering evaluations and system considerations, the blades on the existing induced draft fans for Units 1 and 2 were tipped to help ensure the plant was able to handle the increased gas flows that result from burning PRB coal at current maximum loads.

When high feed rates and/or blends of PRB were burned, combustion was less efficient, there were higher levels of unburned carbon in the fly ash, and full load was difficult to maintain for extended periods of time. Increasing the fineness of the coal through the new crushers had a significantly positive impact on combustion efficiency and helped improve furnace tapping as well.

The sometimes-unpredictable nature of subbituminous coal was driven home at the Crane Station by several teachable moments that Butler discussed in a presentation at the PRB Users’ Group meeting in May. First, in August 2010 the plant experienced a fire on its E Belt tail pulley that resulted from hot work being performed in the area. This ignited coal in a part of the coal-handling equipment that was missed as part of the daily washdown/cleaning procedure. Plant operators made structural modifications to gain access to the area for cleaning and also modified the plant’s hot work procedures.

Then, in September 2011 elevated CO levels were detected at coal silos, the result of an exothermic reaction due to wet coal. Operators addressed this problem by lowering silo levels and keeping the coal moving. Butler recommended using CO monitoring and thermography as useful predictors of developing problems. Also that month, a fire broke out on the A-V coal feeder belt, which stemmed from wet coal hiding out in the belt roller when the feeder was idled in advance of a unit shutdown.

Finally, in March 2012, smoldering coal was discovered on a reclaim feeder, the result of “old” coal sitting inside a Syntron feed chute. A degraded chute allowed air ingress, which led to the smoldering.

Handling subbituminous coal safely and efficiently “all starts with housekeeping,” Butler told the PRB Users’ Group. He recommended painting coal-handling areas white and washing down equipment and surfaces. Above all, he emphasized, “don’t get complacent.” In addition, Butler recommended using the PRB Users’ Group and other PRB users as sources for best practices. “They are willing to help and are tied by the common bond of safety for any user,” Butler said.