Africa is emerging as a prominent voice in calling for a global nuclear renaissance. Driven by chronic shortages from population explosions, decades of drought, and dependence on hydropower — and spurred by discoveries of significant uranium reserves on the continent — several countries are considering nuclear power as a viable option.

South Africa has a significant advantage over the continent’s other nations because it houses the only nuclear power plant in Africa — the 1,800-MW Koeberg Station, which was built in 1984 on the Western Cape (Figure 5). Stricken with a power shortage that has taken a toll on the continent’s largest economy, the country is convinced nuclear power will be key to battling the crunch. 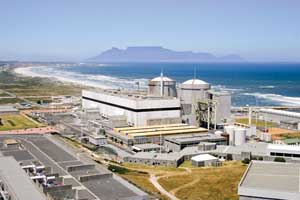 5.     Will Africa go nuclear? Only one nuclear plant exists in Africa today—Eskom’s 1,800-MW Koeberg Station in the Western Cape region of South Africa. Several other countries on the continent are looking to nukes for future power generation, including Egypt, Namibia, and Eastern African nations. Courtesy: Eskom

It is considering the construction of three new nuclear power stations on its coastline. The new stations, provisionally known as Nuclear 1, 2, and 3, would each be able to deliver twice as much electricity as Koeberg. The government wants to build Nuclear 1 starting in 2012, next to the existing Koeberg plant, and at the same time begin work on Nuclear 2 at Bantamsklip, southeast of Pearly Beach. It would later build Nuclear 3 at Thyspunt near Cape St. Francis in Eastern Cape, South African newspaper Die Burger reported this July, citing a study carried out on the government’s behalf by engineering consultancy group Arcus Gibb.

No decisions on reactor technology have been made yet, but experts agree that the choice must be economically viable. Some even assert that the government is considering the homegrown Pebble Bed Modular Reactor, of which an 80-MW pilot plant is expected to come online by 2018, with initial costs estimated at 27 billion rand ($3.45 billion).

Egypt is quickly moving forward to revive the civilian nuclear program it froze 20 years ago, following the accident at the Chernobyl plant in Ukraine. The nation has contracted Australian firm WorleyParsons to select a site, technology, and design, and then build a proposed 1,200-MW plant. The El-Dabaa site on the Mediterranean coast, which had been selected as the preferred site for a new reactor in 1983 before the program was scrapped, remains the preferred site, according to media reports.

More recently, the nation was considering six bids from international firms to provide support and advice on setting up the country’s nuclear safety regulatory framework. The shortlist includes companies from Canada, Germany, France, South Korea, the UK, and the U.S.

Blessed with two significant uranium mines capable of providing 10% of world uranium mining output (Figure 6), Namibia has been quietly realizing plans to generate its own power with nuclear energy by 2018. In a significant development, this September the country signed an agreement with India to trade uranium for expertise in designing atomic plants. 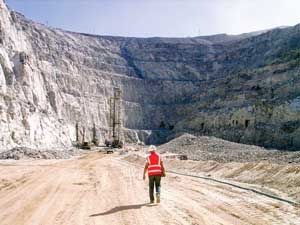 6.    Heavy on uranium, light on power. Namibia is Africa’s top uranium producer, followed by Niger, and then South Africa. Two significant uranium mines in the nation are capable of providing 10% of world mining output: the Rössing Uranium Mine (shown here), one of the largest open pit uranium mines in the world, and Langer Heinrich. But the country imports more than 60% of its power from other southern African countries—and it is suffering shortages as those nations are being forced to cut supply because of rising demand and stagnant generation capacity. For that reason, Namibia is considering setting up a nuclear program and recently made a deal with India for training and nuclear expertise in exchange for uranium. Courtesy: University of the Orange Free State

Namibia already has deals for uranium prospecting with French state-owned nuclear giant AREVA, and it has reportedly discussed prospecting agreements with Russia and Japan — all countries well-versed in nuclear power know-how. The country is also en route to developing a nuclear regulatory framework; last June, the Namibian cabinet tasked the Ministry of Mines and Energy with that responsibility.

Tanzania recently reported vast deposits of uranium at 20 locations in the nation, and it intends to develop some of those reserves — specifically, deposits in Dodoma and Ruvuma — for domestic nuclear energy, media in the country reported this July.

Uganda also claims to have found some uranium and is allegedly considering a similar plan.

Meanwhile, Kenya, suffering a drought-induced chronic shortage of electricity as a result of its reliance on hydropower, has reportedly identified construction sites for a $1 billion nuclear power plant near the coast and in western Kenya, on the banks of Lake Victoria. The government has said construction is scheduled to begin as soon as September 2010, once an ongoing environmental study has been completed.