The coal-to-gas switching debate has been raging for months. How much is happening? How long will it last? Could switching continue to increase? Will the generators save the producers from themselves? So far this year, that latter prediction seems to be the case. Additions to natural gas power burn by electric generators have been about the only thing propping up natural gas prices. If the generators weren’t burning so much gas, the storage surplus would be through the roof. In June, the Energy Information Administration (EIA) announced that natural gas matched coal’s share of U.S. generation for the first time ever in April. That’s a big deal.

What are the drivers behind this shift? First, let’s look at the power burn numbers. Figure 1 tracks gas burned for power generation over the past five years, based on numbers from the Bentek cell model. Back in 2008, power burn never got higher than 25 Bcf/d on an average monthly basis. Prices dropped in 2009, and that was the first year of coal-to-gas switching, with most of the increases coming in the spring and late summer. In 2010, gas power burn was way up, but paradoxically, coal-to-gas switching was down. (We’ll get back to that below.) Last year, power burn was about the same as in 2010. Then, starting in January of this year, gas prices dropped below $3.00/MMBtu, and power burn kicked into high gear. It has been there ever since. 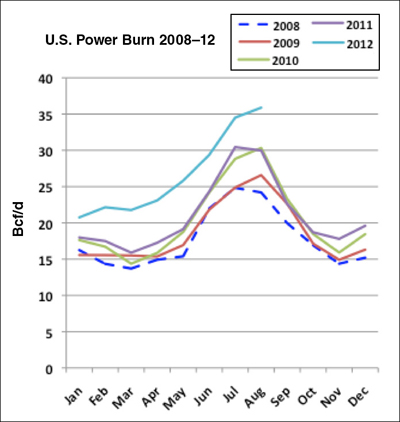 1. The gas power burn for 2012 has been well above that of recent years. Source: Bentek Cell Model

We’ll begin our examination by addressing two questions. First, is there adequate generation capacity out there to allow more switching from coal to natural gas? Second, if there is adequate switching capacity, what are the constraints keeping more of it from happening?

Coal-to-gas switching is fundamentally about the interchange between baseload and intermediate capacity, not peakers. That’s because there are no coal peaker plants that can be switched to natural gas. For the most part, when coal-to-gas switching occurs, it’s going to be between baseload coal steam and intermediate gas combined cycle gas turbine (CCGT) plants.

So the question becomes, is there enough CCGT capacity available out there for more coal switching to be feasible? The answer to this question is an emphatic yes. That’s because of the huge CCGT building spree by independent power producers (IPPs) between 1990 and 2007, when over 168 GW of CCGT capacity was built at 345 plant sites. This building program was equivalent to adding 23% to the entire national generating fleet that existed in 1990. It was classic overbuilding based on the premise of low natural gas prices. When gas prices went through the roof in 2008, the building stopped.

Before 2009, the year after gas prices hit the skids and the first year of serious coal-to-gas switching, many of these CCGT plants ran at average capacities as low as 30%. That year about 3 Bcf/d of coal-to-gas switching took place. The following year, it was hot in high gas usage areas like Texas (which had another one of those record-breaking summers). So gas prices were higher as utilities used more intermediate/cycling and peaking capacity. Paradoxically, those higher prices actually cut back the volume of coal-to-gas switching to less than 2 Bcf/d. More gas was burned, but it did not replace coal; rather, it added to it because overall demand was higher. The market situation was similar last year, but switching rebounded back to about 3.0 Bcf/d, mostly due to geography of the heat and better preparation for switching on the part of some utilities and power generators.

But then came 2012. Shale exploitation continued to drive natural gas production ever higher. Gas-to-coal switching came on with a vengeance as natural gas prices dropped below $3.00/MMBtu in January, and it has been huge ever since. The switching number could get north of 7 Bcf/d this year. You can see the 2012 shift in Figure 1. But even at that level there is theoretically room for a lot more switching.


What’s Keeping the Brakes On

So if there is plenty of switching capacity available, what is preventing more of it? Let’s look at the drivers:

Of all these drivers, fuel cost is the only factor that utilities can base coal-to-gas switching decisions on and the one that is most likely to cause any increase in coal-to-gas switching. And in fact, fuel cost has been the driver behind almost all the coal-to-gas switching we have seen so far. (It is true that some coal-to-gas switching is occurring due to natural attrition because smaller, older coal plants fail to meet Environmental Protection Agency pollution attainment standards. Faced with high costs to install cleaning equipment, plant owners are decommissioning these older plants, but not at a rate that is going to eat up the natural gas storage surplus.)

To calculate fuel cost, we need to look at generation plant economics in terms of efficiency. In a perfect plant, it would take 3,412 Btu to generate 1 kWh of electricity at 100% efficiency. According to the EIA, an average natural gas CCGT plant runs at 44.78% efficiency and therefore consumes 7,619 Btu/kWh. An average coal plant has 33.64% efficiency and consumes 10,142 Btu/kWh.

The coal price we are going to use is the NYMEX coal futures contract (quoted in $/ton) for Central Appalachian coal with an energy content of 12,000 Btu/lb, or 24 MMBtu/ton. If our plant uses 10.412 MMBtu/MWh and coal is priced in units of 24 MMBtu, then we need to multiply the coal price by 0.4226 (10.412/24) to get to an equivalent cost of coal to generate our MWh of electricity.

Figure 2 shows the data over the last five years. You can see, now that we are comparing apples to apples, the economics of plant fuel cost have become clearer. The coal fuel cost (blue line) has been lower than the natural gas fuel cost (green line) until almost exactly a year ago. The farther the gas fuel costs falls below coal, the more coal-to-gas switching can occur. 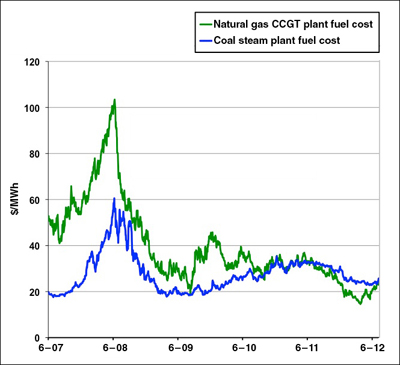 2. Fuel costs for coal-fired generation have only recently risen above those for gas. Source: EIA, NYMEX

During the last two weeks of July, the CME/NYMEX prompt natural gas futures contract moved above $3.00/MMBtu in response to continued high natural gas power burn during a nationwide heat wave. High gas power burn numbers kept the storage surplus in check. An unexpected increase in gas storage injection during the final week of July prompted a futures sell-off on August 2 as the market feared that gas power burn was being choked by prices over $3.00/MMBtu.


Coal on the Rebound?

Figure 3 shows the data since January of this year. You can see that gas fuel costs have recovered since their lows in mid-April and that coal fuel costs have stayed just above gas, so that the economic window to increase coal switching has narrowed considerably.  Gas power burn has increased recently because CCGT units have been run to meet peak generation during the July heat wave, rather than as a result of increased coal-to-gas switching. 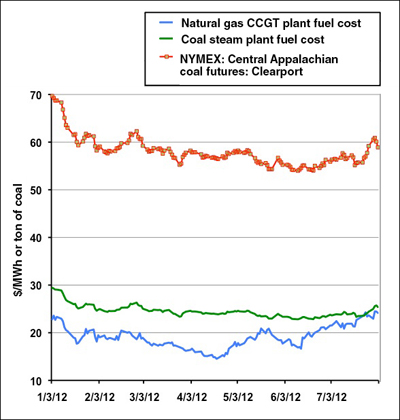 3. After remaining under coal for most of this year, gas is finally edging upwards again. Source: NYMEX

Of course, our numbers here are for typical plants using average efficiency levels. And, we are ignoring price basis relationships, transportation costs, and many other variables that impact plant economics. On a general level, however, these examples are useful indicators.

We should also note that coal prices have been higher in the Central Appalachia region where the NYMEX coal contract is delivered because supplies have been tight there. Coal prices in the Powder River Basin (PRB) are considerably lower than in Appalachia. Hence, there has been far less coal switching in the West (including California) because lower-priced PRB coal has held its own against natural gas. In general, the impact of coal switching has been to increase stockpiles of coal, and that will likely lead to further declines in coal prices. However, coal producers have been so concerned at the abundant shale gas supplies that they are eying export markets for the longer term.

—Sandy Fielden is director of energy analytics for RBN Energy. A longer version of this article was previously published on the RBN Energy blog.