A decade after hydraulic fracturing, or fracking, started the shale revolution and ended high natural gas prices, another revolution is set to rock the industry—Floating Liquefied Natural Gas—FLNG.

It’s the leading edge of the natural gas world, and it could impact Canadian and U.S. hopes for huge LNG exports. A full 10% of the LNG world is expected to be sourced from offshore LNG by the end of this decade, with costs potentially as much as 40% lower than onshore projects.

You see, there isn’t a single FLNG terminal/ship producing anywhere in the world—but they’re coming. But Royal Dutch Shell’s $10-$12 billion Prelude Project will be the first in 2017 when it anchors down 200 km off the northwest coast of Australia at the 3 Tcf Prelude field—its home for the next 25 years. 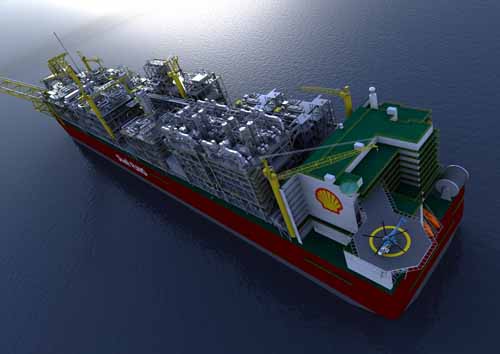 Prelude will be—by far—the largest floating vessel in the world—and could produce LNG for just 60% of what onshore facilities do. While it will only produce 0.5 Bcf/d of LNG, some industry players are forecasting rapid growth for FLNG around the world.

Shell estimates there is a mind boggling amount of stranded natural gas underwater, all over the world—some 240,000 Bcf—and much like onshore shale gas, the industry knows where a lot of it is, but hasn’t had the technology to produce it at a profit.

So is there potentially another huge amount of cheap, clean natural gas available to the world? Yes, but unlike onshore shale gas, however, the capital costs are so high that only a handful of companies have the capital and expertise to do this. While this is the leading edge in the natural gas space, I’m not expecting serious FNLG volumes until the end of this decade.

Shell’s General Manager for FLNG, Neil Gilmour, told the Financial Times he thought FLNG could follow the same growth path of floating oil production ships, which were introduced in 1977. There are now over 150 around the world.

And the growth curve is already starting. In addition to Shell, other companies like Brazil’s Petrobras, BG Group in the UK, Repsol in Spain and Portugal’s Galp Energia are placing orders for ships, albeit with smaller projects offshore Brazil.

Shell itself has other FLNG vessels on the drawing board for projects in East Timor, South America, Indonesia and East Africa. Shell has specifically stated the smaller environmental footprint is a big selling point in geopolitically sensitive areas like East Timor.

Forecasts from most energy analysts are that by 2015, the liquefaction capacity of FLNG projects around the world will be 6.7 million tons per year or about one-tenth of global capacity. If Prelude is successful, FLNG usage will expand even faster.

I’ve written several times on how the global market for LNG is growing quickly. LNG is forecast to be the world’s fastest growing fuel market (growing twice as fast as regular natural gas) through 2030, says BP’s chief economist Christof Ruhl. He adds that LNG is already 25%-30% of internationally traded gas and makes up 9% of global gas demand.

The International Energy Agency forecasts that within a few years, LNG imports will meet about a fifth of the total incremental demand in the world for gas. In 2010, LNG accounted for about 10% of the total global demand for natural gas. This implies a double-digit growth rate for LNG over the next few years and possibly even longer with most of the demand growth coming from Asia and the Middle East.

FLNG ships like Prelude reduce both the project costs and environmental footprint of LNG development. Despite their massive size, they’re still only one quarter the area of an onshore LNG plant. (But it will still be longer than four soccer fields put together, and will hold 175 Olympic swimming pools of LNG.)

But there is no need for long pipelines to shore, no compression platforms to push the gas to shore, no nearshore works such as dredging and jetty construction, and no other buildings and roads. Shell expects Prelude will produce 15% less carbon dioxide than an onshore LNG facility.

For $10-$12 billion, Prelude will, according to Shell’s estimates, produce 110,000 boe (barrels of oil equivalent) per day (my math comes out with slightly different numbers), which is roughly broken down like this:

There are obviously huge risks with a project this size—huge storms, long-term economics, capital costs, etc.

But if Prelude works, FLNG has the potential to do for stranded gas offshore what fracking has done for trapped natural gas onshore.

—Keith Schaefer is editor and publisher of Oil & Gas Investments Bulletin. This article was originally published on his web site.