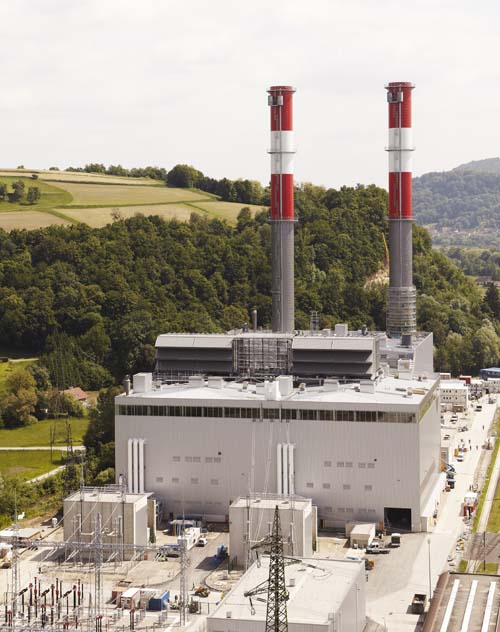 Verbund Thermal Power’s combined cycle gas turbine power plant in Mellach, Austria (shown above), which commenced commercial operation in May, is the most modern, powerful, and efficient plant in the country. Built by Siemens Energy Sector Austria, the 838-MWe facility employs two Siemens SGT5-4000F gas turbines in 1 x 1 single-shaft configuration with the heat recovery steam generators and SST5-5000 steam turbines. It can provide up to 400 MWt of district heating, and on an annual basis, it can generate up to 5 billion kWh of electricity and 800 billion kWh of district heat.

The new plant replaces five older units in southern Austria that were run on coal or fuel oil, and is estimated to eliminate up to two million tons of CO2 per year as a result. Plant efficiency is around 59% for pure power generation and approximately 80% for combined heat and power.

“We are investing in the most cutting-edge and efficient thermal power technologies and, with the combined production of electricity and district heating, are performing a significant contribution to climate protection, as well as to the saving of primary energy," said Verbund CEO Wolfgang Anzengruber.

For the production of district heating, steam is extracted from the steam turbine, which is then passed to a heat exchanger. This is used to heat the district heating water, which then transfers the heat through pipes to end users.

A key element in this process is the Bungartz centrifugal condensate pumps. The mixed vapor-liquid condensate is first fed into the vapor separation vessel and, after cooling, pumped into the neutralization tank. In this application, standard pumps with a closed impeller often have problems that lead to interruptions in the pumping process. In contrast, the self-regulating Bungartz V-AN pumps work with an open impeller (Figure 1). Pressure equalization with the impeller inlet prevents cavitation, which is a common problem when pumping water at or near the boiling point. 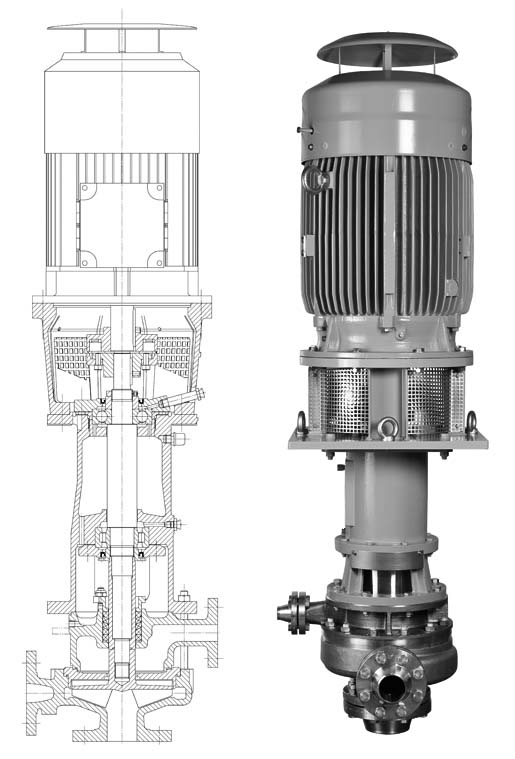 The special features of the impeller geometry and the pressure equalization contribute to the pump’s stability. Steam that reaches the pump does not cause damage; it is simply bled away by means of pressure equalization. Thus, the pumps operate without cavitation and without any interruption in the delivery rate.

The V-AN pumps also self-regulate the correct flow rates. The delivery height and incoming volume flow determine the height of the liquid in the pump reservoir. If no further liquid flows in, the pump maintains the static height of the plant at zero delivery. This eliminates the need for level control instrumentation. The V-AN can be operated for any amount of time at zero flow and can even run dry. Because neither the bearing nor the magnetic drive is in direct contact with the pumping media, the pump can be operated almost independently of fluid.

When a pump is selected, criteria for the specific application are important from the point of view of the plant engineers and operators. In this case, the criteria were the boiling medium, the delivery volume, the conveying pressure, and the optimum suction head. Savings can be made with respect to the installation height, as no second story is necessary.

The Bungartz self-regulating V-AN centrifugal pumps feature easy-to-implement sealing technology and are highly suited to boiling liquids. A large number of volume flow controls are possible. The pumps are self-regulating but can also accept other forms of regulation.

The design, manufacturing, and testing procedures Bungartz employs have allowed for very long service lives for the V-AN series pumps. In Austria, V-AN series pumps are installed in other latest-generation power plants in Simmering and Timelkam, and are reported to have been running without any malfunctions since being put into operation.