There has been no shortage of gas price forecasts lately, and the at times wildly varying estimates put forth by investment banks and consulting firms have underscored the difficulty in trying to pin down reliable numbers in a market that is operating outside historical fundamentals. To further complicate matters, the price of natural gas, as delivered to combined cycle plants, the chief competitor of mid-merit coal plants, may differ substantially from broad spot natural gas prices.

SNL Energy examined delivered fuel costs to combined cycle gas turbine (CCGT) plants for various regions across the country. For plants within an independent system operator (ISO), the region assigned was the ISO, while plants falling outside ISO membership were assigned a region based on legacy North American Electric Reliability Corp. (NERC) subregion. 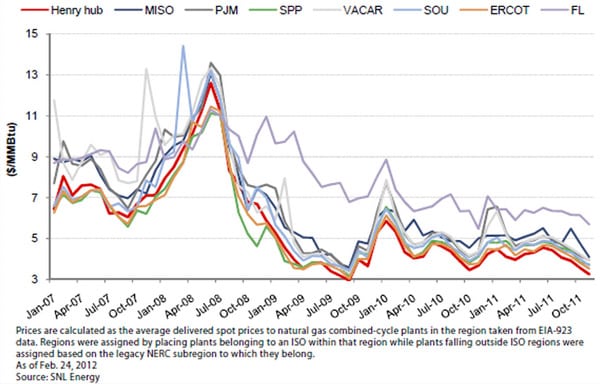 Historically, prices for the FL NERC subregion, which comprises most of Florida, have varied considerably from prices at the Henry Hub. From 2007 through November 2011, the average basis between the Henry Hub and delivered gas costs to CCGT plants in the region has averaged over $2.00/MMBtu and reached well over $3.00/MMBtu on average for December.

The VACAR NERC subregion, which is made up of portions of Virginia and North Carolina, is home to a number of coal-fired plants with high operating costs and is potentially ripe for coal-to-gas switching. Delivered gas costs to CCGT plants in the region have historically been higher than one might suspect, with the basis differential compared to the Henry Hub averaging over $1.00/MMBtu since 2007. The basis differential during the winter months has been even wider, averaging more than $1.50/MMBtu since 2007 (Table 1). 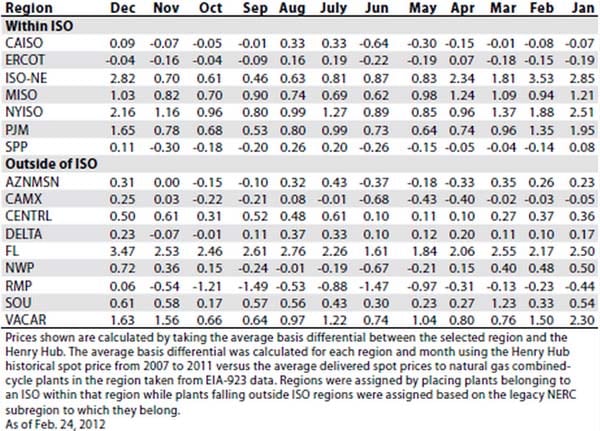 Not surprisingly, delivered gas costs in the Northeast have averaged well above the Henry Hub spot price. Since 2007, the basis differential to the Henry Hub for CCGT plants has averaged about $1.30/MMBtu in the New York ISO. This average basis has been more pronounced in the winter, with the gap over $2.00/MMBtu for December and January. ISO New England Inc. has seen an even higher average basis differential of about $1.50/MMBtu since 2007, with the average reaching over $3.50/MMBtu in February.

The annual average basis between delivered gas costs to CCGT plants in PJM Interconnection LLC and the Henry Hub spot price has been roughly $1.00/MMBtu since 2007. This gap exhibits pronounced seasonality reaching nearly $2.00/MMBtu in January, averaging 50 cents to 75 cents per MMBtu in the spring and fall shoulder months and climbing to closer to $1.00/MMBtu during the summer.

The basis differentials between the delivered gas costs to CCGT plants and the Henry Hub spot price may have significant implications for coal-to-gas switching. The higher average basis for many regions during the winter and summer months may limit coal-to-gas switching to a shoulder season phenomenon for many plants. Power stations that could be susceptible to coal-to-gas switching essentially fall into two categories: those with average costs high enough to warrant switching whenever possible throughout the year and those that are economically displaceable only during the spring and fall shoulders.

The forward curve for the Henry Hub shows prices rising relatively modestly from spring through summer, flattening from August through October, and then rising more steeply through December (Figure 2). The forward price for the March contract as of Feb. 24 was just over $2.50/MMBtu, with the summer contracts at nearly $3.00/MMBtu and the December contract at nearly $3.60/MMBtu. 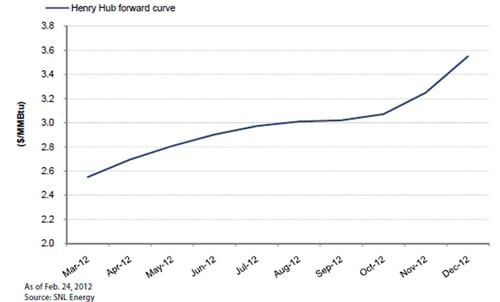 SNL Energy took the Henry Hub forward curve for 2012 as of Feb. 24 and combined it with the monthly average basis differential for each region to approximate the direction for delivered gas costs for the year. This data is solely illustrative and is not meant to serve as a forecast of expected delivered gas costs.

The highest average delivered costs in 2012 could be seen in the FL NERC subregion. Adding Henry Hub forward prices for 2012 to the average basis differential based on delivered gas costs to CCGT plants in the region would yield a price of $5.10/MMBtu in March, reaching as high as $7.02/MMBtu in December.

Using the same forward pricing methodology, the VACAR NERC subregion would see a gas price of $3.31/MMBtu in March [Editor: actual Henry Hub prices in March began at $2.45 and ended the month at $2.00], rising slightly during the summer months and climbing to roughly $5.00/MMBtu in November and December (Figure 3). 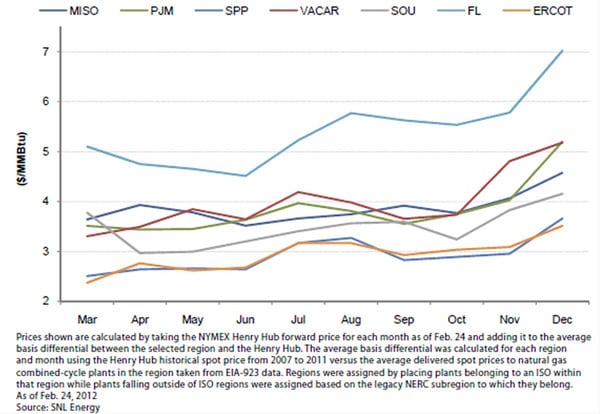 Future gas prices calculated for the coal-heavy SOU, or Southeastern, NERC subregion yield a 2012 forward curve that is relatively flat with a price of $3.78/MMBtu in March, falling slightly through the shoulder months of April and May before slowly rising to $4.16/MMBtu in December.

With gas prices so low, interest is peaking in the coal-to-gas switching potential for plants burning coal sourced out of the Midwest and the Powder River Basin (PRB). Plants operating in the Midwest ISO (MISO), where the delivered cost of natural gas to CCGT plants has averaged roughly $1.00/MMBtu higher than the Henry Hub spot price over the past several years, consume much of this coal. The calculated 2012 forward curve created by adding the Henry Hub price to the average basis differential yields forward monthly prices averaging $3.86/MMBtu for March through December and reaching a high of $4.58/MMBtu in December (Table 2). 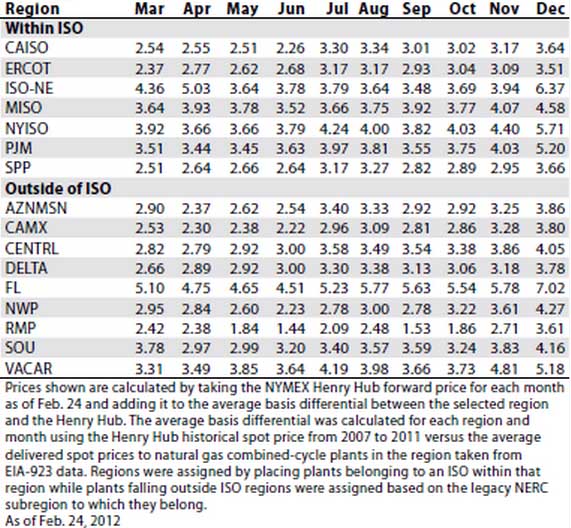 A coal-to-gas parity calculation—using current average Illinois Basin spot coal prices, current SO2 and NOx emissions costs, a $9.00/ton coal transportation cost, a $1.50/MWh average variable non-fuel O&M cost, and adjusted for the higher efficiency of a 7,500-Btu/kWh CCGT plant versus a 10,500-Btu/kWh coal plant—yields a gas floor of $4.15/MMBtu. While this gas parity calculation is broad, it indicates a move toward some potential for coal-to-gas switching for plants consuming Illinois Basin coal if actual forward delivered gas costs are in the range of those previously calculated.

A parity calculation for Powder River Basin coal using the same heat rate assumptions and emissions costs, current coal market prices, and a transportation rate of $16/ton yields a gas floor price of $2.42/MMBtu. While individual plant costs may vary, this indicates limited displacement of PRB coal in the Midwest when compared against the calculated forward gas price curve.

There has also been growing interest regarding the potential for widespread economic displacement of PRB coal in the Electric Reliability Council of Texas Inc. (ERCOT). The gas parity price of $2.42/MMBtu calculated for PRB coal using the same assumptions as above is near the calculated forward gas prices for ERCOT for March through June. The derived forward curve has delivered gas prices to CCGT plants in ERCOT largely breaking $3.00/MMBtu starting in July, which could limit switching potential in the second half of 2012. It is important to reiterate that these are broad derivations and actual coal-to-gas switching is dependent on a myriad of factors unique to each coal plant and associated market.

The coal-to-gas parity price for Central Appalachia coal—using current average coal spot prices, current SO2 and NOx emissions costs, a $20/ton coal transportation cost, and a $1.50/MWh average variable non-fuel O&M cost, and adjusted for the higher efficiency of a 7,500-Btu/kWh CCGT plant versus 10,500 Btu/kWh—yields a gas floor of $5.35/MMBtu. This is well above the calculated forward delivered gas prices for most of the regions and months considered. A similar calculation for Northern Appalachia coal using a coal transportation rate of $15/ton yields a gas floor of $4.73/MMBtu, indicating the strong economics for coal-to-gas switching for plants consuming coal out of this region.

—Jesse Gilbert is a senior analyst with SNL Energy. This article is reprinted by permission, with minor edits for this publication.