Gas turbine manufacturers have rolled out a steady stream of incremental upgrades to their products, both large and small. But on the horizon are some potential developments that may represent a major advance in technology.


From Combined Cycle to Triple Cycle

As envisioned, this "fuel cell combined cycle" (FCCC) plant would place a SOFC power generation system before the gas turbine (Figure 1). Liquefied natural gas would be passed through the SOFC before entering the combustor. Air from the compressor would also be fed back into the SOFC to capture waste heat. MHI expects the FCCC system to achieve efficiencies exceeding 70% for systems in the several hundred MW class and over 60% efficiency for systems under 100 MW. This contrasts with the barely 60% efficiency that is currently the state of the art in conventional combined cycle power plants (CCPPs). 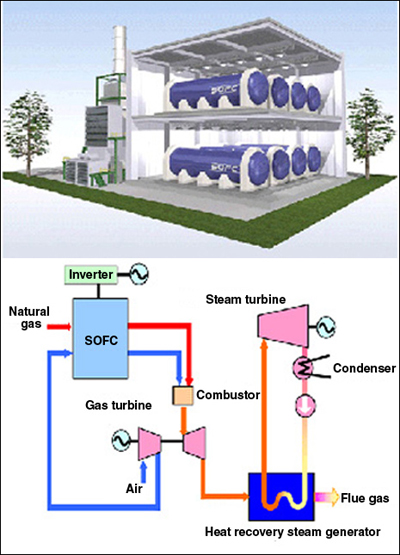 Under the umbrella of the Japanese New Energy and Industrial Technology Development Organization, MHI will launch a two-year study as part of a project to develop improved systems and technologies for SOFCs. In addition, MHI will partner with Hitachi to develop an approximately 90-MW plant with better than 60% efficiency by the end of 2014, with an eye to having the design ready for market in 2017. Plans for a 400-MW design are also in the works.


From Carbon Capture to Carbon Cycle

The company announced in June that it had received backing from the Shaw Group, Exelon, and Toshiba to develop a new gas-fired power generation technology that uses an oxyfuel (pure oxygen-fed), high-pressure, supercritical carbon dioxide cycle and produces pipeline-ready CO2 for sequestration or use in enhanced oil recovery (EOR), without reducing plant efficiency. Because all of the exhaust CO2 is captured, it also produces little to no emissions. The three companies said they would back NET Power’s efforts to develop a pilot natural gas plant that could begin operating within the next two years.

The first two phases of the project will involve front end engineering and combustor rig testing, which are expected to be completed later this year; Phase 3, to be completed in mid-2014, involves construction and commissioning of a small-scale 25-MW natural gas plant that will capture all emissions, generate revenue from the sale of electricity, and produce CO2 for EOR. Development of the first full-scale commercial 250-MW natural gas plant is expected to begin thereafter, in late 2014 or early 2015.

NET Power, which developed the system and calls it the “Allam Cycle” (Figure 2), after lead inventor Rodney Allam, is expected to be responsible for overall project development and systems engineering of the pilot project; Toshiba will design, test, and manufacture a combustor and turbine for it; Shaw will provide engineering, procurement, and construction services; and Exelon is expected to support development and operation of the 25-MW plant by selecting the site, obtaining permits, and commissioning the facility. Early in June, Shaw said it would provide up to $50.4 million in cash and in-kind services to the effort and acquire up to 50% of NET Power as certain milestones are completed during the four phases of the project.

2. NET Power, The Shaw Group, Exelon Corp., and Toshiba Corp. have partnered to develop a new gas-fired power generation technology that they say produces pipeline-ready carbon dioxide for sequestration or use in enhanced oil recovery and are looking to put into operation a small-scale 25-MW plant by mid-2014. The technology is called the “Allam Cycle,” after inventor Rodney Allam. Courtesy: NET Power

The technology has “transformative applications” and can be integrated into a variety of industrial processes, such as liquefied natural gas, EOR fields, and concentrated solar plants. "In each case," Allam said, "NET Power produces cleaner electricity with far greater efficiencies than existing natural gas plants. In certain regions, such as the Middle East, NET Power is able to integrate with a number of processes at once, providing particularly large advantages."

“Although the initial system will utilize natural gas, future applications of NET Power will use coal, integrating with current gasifiers, and biomass,” the company said in a statement in June.

In addition to producing clean power, the technology promises to have other tangible benefits for the energy industry if it can be rolled out on a large scale. The U.S. Department of Energy estimates that nearly 84 billion barrels of oil are recoverable using EOR in the U.S., and 500 billion to 1 trillion barrels are recoverable worldwide. However, current sources of CO2 for EOR can supply only a small fraction of that need, as most industrial CO2 capture technologies cannot produce cost-effective, EOR-ready CO2. NET Power says the technology has the potential to expand the EOR industry while simultaneously sequestering large quantities of CO2 below ground.