Where’s the best place to work in the federal government? The U.S. Nuclear Regulatory Commission (NRC), according to U.S. Office of Personnel Management (OPM). According to the OPM’s “Federal Human Capital Survey 2008,” the NRC earned the top spot with first-place finishes in three of four indices (see table). 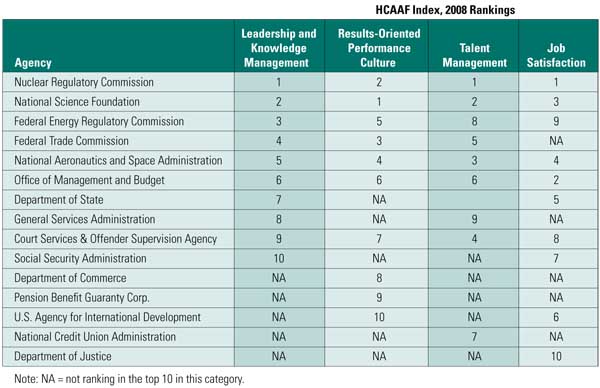 It’s worth noting that the OPM (which is not the religion of the masses) clearly went out of its way to make it difficult for anyone to locate and access its 2008 “human cattle” ratings (a term coined by Washington Post columnist Joe Davidson), released in January 2008. Finding the report required digging into multiple layers of web-cake, based on largely incoherent instructions.

Bottom of the Heap

Created during the dying days of the ever-obfuscatory Bush administration, the OPM also refused to reveal the lowest-ranked federal employer until pressured by the Post and other publications. The worst federal employer, according to the OPM survey, is the Broadcasting Board of Governors (BBG), which oversees the Voice of America (VOA), the nation’s foreign news—and some would argue propaganda—arm.

The OPM surveyed employees in 37 federal agencies. The fed’s human resources agency (we called it personnel when I worked for Uncle Sam, and apparently the government still does) asked employees to rank their agency in terms of leadership and knowledge management, talent management, job satisfaction, and results-oriented performance culture. The NRC, with its headquarters in suburban Maryland, ranked first in the first three categories and second in the fourth category, after the National Science Foundation.

It’s worth noting that the overall third-place finisher was the Federal Energy Regulatory Commission (FERC), also an independent regulatory body and not ultimately controlled by a Cabinet-level agency—although FERC is nominally under the DOE’s thumb.

In an interview with the Post, NRC Chairman Dale E. Klein, a holdover from the Bush administration who is likely to be replaced soon, said the three reasons the NRC has won such employee loyalty (despite an ongoing dispute with the union that represents many of the agency’s employees) are “communication, communication, communication.” He explained, “I think we have culture of openness, so, not only do we communicate, but we listen, and that permeates throughout our agency.”

Employees of the BBG, Davidson learned, ranked their employer 36th out of 37 in job satisfaction and last in the other three categories. The director of the VOA, Dan Austin—another Bush administration holdover—was understandably defensive. Austin told Davidson that the VOA employees were projecting anxiety about the agency’s operations changing to new media platforms.

The VOA, explained Austin, has been transformed “from what had been a shortwave radio broadcaster to a true international, multimedia organization. We’re out there on Facebook, YouTube, text messaging, certainly radio, but also on television. Half of our audience see us on television. This is a huge change, a seismic shift, if you will, and when you get that kind of change it creates a lot of issues for many people. I think the survey reflected some of that.”

The NRC: A Consistent Winner

The NRC’s 2008 ranking is consistent with earlier analyses. Using the OPM data in 2007, the Partnership for Public Service and American University’s Institute for the Study of Public Policy Implementation created the “Best Places to Work”  rankings. The results indicated that the NRC was by far the leader in federal civil service employers, ranking first out of 30 categories ranging from “employee skills/mission match” (a score of 81.3) to “work/life balance” (a score of 73.2). The NRC’s rankings for 2009 are even better.

In summary, it looks as if the NRC is doing a lot of things right when it comes to human resources, and has been doing them for quite a long time. Running human resources programs for large federal agencies is a difficult task, but the NRC seems to have mastered the job.

Moving forward, the agency’s biggest HR challenge will be replacing the large number of baby-boomer employees who will retire. And they will retire, because federal employees have a generous retirement option. Many are eligible at 55 years old and 30 years of employment. Although the feds several years ago switched from a defined-benefit program (75% of the highest three years of salary) to a 401(k) approach, the boomers largely fell under the earlier retirement plan and will get defined pensions (which include generous health benefits).