Don’t count coal out when it comes to the down-and-dirty details of the energy marketplace, despite the political rhetoric coming from Washington-based environmental groups, many in Congress, and the Obama administration. With much of the energy economy struggling—wind and solar layoffs, project cancellations, etc.—coal seems to be cooking along quite nicely, thank you very much. As long as Americans need electricity, they will need coal.

The supplier of the fuel for over half of the electric-generating capacity in the U.S. is not seeing much business erosion and is recognizing some significant earnings increases in a soft market. In April 2008, St. Louis–based Peabody Energy, the world’s largest private-sector coal company (that means we don’t count China’s state-owned coal operations), reported strong first quarter earnings of $325 million (15% or 50 cents per share). Peabody says its revenues rose to $1.46 billion in the first quarter of 2009.

Peabody CEO Gregory Bryce said in a press release, “We had great results despite customer deferrals and multiple longwall moves, which shows the depth and diversity of the portfolio.” Bryce was referring to the company’s many long-term supply contracts—seemingly impervious to general market conditions. Peabody’s market results are also bolstered by the company’s role as a significant natural gas producer.

Bryce said Peabody is weathering the economic storm “with a strong balance sheet and cash flows, heavily contracted positions, and tight capital discipline.” In other words, the company has strong long-term fuel supply contracts and isn’t spending much on new mines or equipment. That makes a lot of sense.

First quarter 2009 Peabody coal sales totaled 59.6 million tons, a tad below the figure for 2008, the company reported. One reason for the slight sales slide was bad weather in the Wyoming and Montana Powder River Basin (PRB). But revenues grew from $194 million to $1.46 billion for the quarter, driven by higher prices. In the U.S., said Peabody, the “average U.S. realized price per ton” was up 16%.

CONSOL Not Feeling the Heat

Pittsburgh-based CONSOL Energy had even better financial results. The company—which specializes in high-Btu eastern and Appalachian coal and natural gas—reported 2009 first quarter earnings of $196 million ($1.08/share). That surprised Wall Street, which boosted CONSOL’s share price at the end of the week of April 25 by 14% to $29.36/share (see figure). 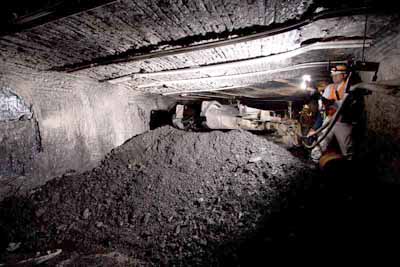 J. Brett Harvey, CONSOL CEO, said, “This was one of the best quarters in the company’s history. Despite the weakened economy, CONSOL was able to achieve outstanding net income and earnings per share. Both our coal and gas segments performed extremely well in these difficult times.”

CONSOL is the great-grandchild of the H.C. Frick Coal Co., which supplied coke for making steel to Andrew Carnegie’s U.S. Steel Co. in the 19th and 20th centuries from western Maryland, western Pennsylvania, and West Virginia underground mines. Since then, CONSOL (nee Consolidation Coal Co.) has morphed into a major supplier of high-Btu utility steam coal across the country, running major underground mines in Appalachia, as well as a natural gas producer.

Back to St. Louis and Arch Coal Inc., another major U.S. coal producer (supplying over 10% of U.S. coal deliveries). Arch claims to be handling the current economy quite nicely. Its first quarter earnings were $30.6 million, or $0.21/share. That’s down from $81 million ($0.56/per share) for the same period in 2008. Nonetheless, says Arch, business is going pretty well under the circumstances. Sales fell 10.8% and revenues declined 2.6% compared the first quarter of 2008.

In an April 2009 news release, Arch CEO Steven Leer said, “Our operations achieved strong safety and environmental performances while turning in solid financial results for the first quarter, underscoring the company’s commitment to our three key pillars of performance.” Those performance pillars are unspecified in the news release.

Among the influences on Arch’s profits was a $3.4 million charge related to the company’s purchase of the Jacobs Ranch mine, a large and profitable PRB strip mine. Arch has large underground mines in the Midwest and Appalachia, as well as major surface mines in the PRB.

In all, coal—derided and despised by many outside the power industry as a residue of the 19th century, is doing quite well in the current 21st century economic downturn.