Plug-in hybrid cars could get a boost from new technology developed at the DOE’s Pacific Northwest National Laboratory (PNNL). But they could also add electric demand that could crash the U.S. transmission and distribution grid, according to the researchers.

PNNL engineers have come up with a way for owners of plug-in hybrid cars to recharge their batteries at times when electricity costs the least and demand is lowest, possibly preventing a grid collapse. It’s a high-tech timer (see figure). 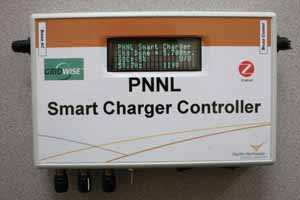 Engineers at the Pacific Northwest National Energy Laboratory have designed a Smart Charge Controller that will charge your plug-in electric hybrid vehicle when the cost of purchased power is low. Courtesy: PNNL

Researchers at the Richland, Wash., lab have developed what they call the “Smart Charger Controller” to make sure consumers driving plug-in hybrid cars charge their vehicles’ batteries when systemwide electric demand is lowest. In an April 2009 press release, PNNL (operated by Battelle Memorial Institute of Columbus, Ohio, since 1965) said, “Electric vehicle owners can plug in their cars and forget about them, knowing they’ll get the cheapest electricity available and won’t crash the grid.”

The ability of the smart car battery charger to react to load demands, says PNNL, “could serve as a shock absorber for the grid. The technology would relieve load instantly and give grid operators time to bring new power generation sources on line to stabilize the grid—a process that usually takes several minutes.” The controller, says the lab, can sense stress conditions on the grid and temporarily stop charging when instabilities threaten to bring it down.

PNNL created a short video that demonstrates charging technology aimed at maximizing the value of a plug-in hybrid car by ensuring that it gets charged from the electric grid at times when demand and prices are low.

The grid impacts are important, notes PNNL engineer Michael Kintner-Meyer. “If a million owners plug in their vehicles to recharge after work, it could cause a major strain on the grid,” he said. “The Smart Charger Controller could prevent those peaks in demand from plug-in vehicles and enable our existing grid to be used more evenly.” He said the device could potentially save a plug-in driver up to $150/year in electricity costs.

PNNL asserts that “electric vehicles will become widely available starting in 2011, and the current administration supports a goal of one million electric vehicles on the road by 2015.” However, many analysts regard those numbers as inflated.

The most widely touted plug-in is the General Motors Chevy Volt, which is designed to travel 40 miles on battery power before the need for a gasoline engine kicks in. The small, four-seat Volt is likely to cost at least $30,000 after generous federal subsidies, suggesting it won’t be a big seller if gasoline prices remain around $2/gallon. GM says the Volt will be available for sale in 2010.

In an April 2009 Washington Post op-ed column, editorial page staff writer Charles Lane said, “Unless and until gas prices shoot up, you’d be crazy to buy one of these much-ballyhooed vehicles, which will run 40 miles on a single charge if GM can overcome difficult battery-engineering issues.”

Promoters of electric cars of all descriptions—conventional hybrids, plug-in hybrids, and all-electric models (such as the highly touted and less-delivered Tesla Roadster)—justify their market plans on appeals to reduce U.S. imports of petroleum (substituting them with U.S. coal-fired electricity). Lane observes, “The electric car is hostage to the oil-price cycle. Indeed, to the extent that we use more electric cars, we reduce the demand for petroleum, which drives down the price of petroleum, which makes electric cars less competitive with gas-burning ones—and so on.”

The PNNL research also highlights another conundrum: Plug-ins need to be plugged in in such a way as to not overload the currently fragile U.S. electric transmission and distribution system. In its news release, the national lab said, “A previous PNNL study showed that America’s existing power grid could meet the needs of about 70% of all U.S. light-duty vehicles if battery charging was managed to avoid new peaks in electricity demand.” If not, what then?