“Faith” is generally defined as the belief in things that are unseen. Using that definition, many utility-industry managers and leaders apparently consider customer satisfaction the ultimate faith-based initiative. They may be wrong.

I’ve been analyzing utility customer satisfaction (CSAT) for several years, conducting dozens of lengthy interviews with managers, directors, and officers at electric and gas distribution utilities, both shareholder-owned and publicly owned, across North America. My goal has been to move beyond faith and try to determine, quantitatively as best I can, whether and to what degree utility customer satisfaction is related to business outcomes for utilities.

Creating shareholder wealth is a critical measure of success for most businesses, so we’ll start there. Data compiled by L.E.K. Consulting and J.D. Power and Associates clearly shows that top-tier utility customer satisfaction does not correlate with (either as a result or a driver of) higher shareholder returns. Shareholder return is the sum of changes in the price of a stock, plus the payment of cash dividends. For this analysis, I chose annual shareholder returns over a 10-year period to minimize the potential for distortion from unusual, transient, or one-time events. The longer time frame smoothes out dramatic swings from one year to the next.

Table 1 is a list of the investor-owned electric utility holding companies that posted top-quartile average annual shareholder returns over a 10-year period through December 2007, as calculated by L.E.K. Consulting. That year was the last that L.E.K. performed its calculations. 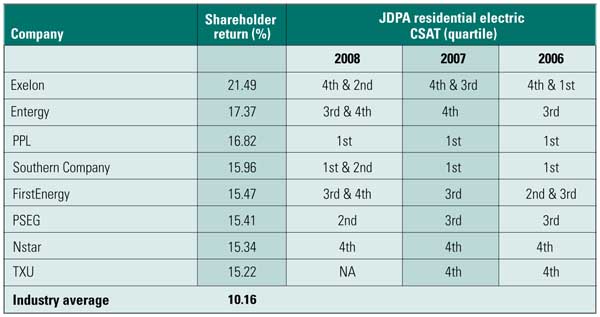 These eight utility companies all had annual shareholder returns that were well above average for a prolonged period of time. The utility industry average annual shareholder return for this 10-year period was 10.16%. The last three columns show the performance of each firm’s operating utilities in the three years of the J.D. Power and Associates residential electric customer satisfaction surveys. Holding companies with multiple operating utilities (such as Exelon, Entergy, and FirstEnergy) show multiple J.D. Power quartile scores to reflect the different scores of those operating companies.

The table shows more instances where top-quartile shareholder returns negatively correlated with customer satisfaction at the operating utility. Cases in point include Exelon (its Commonwealth Edison unit has been fourth quartile for some time), NSTAR, and TXU Energy. This relationship has persisted for several years.

Table 1 also shows a number of cases where holding companies with top-quartile average annual returns had either second- or third-quartile CSAT performance—which further muddies the customer-satisfaction waters. This broad distribution of results, which I’d call almost random, raises questions as to whether there is any hard and fast rule about the relationship of shareholder performance and customer satisfaction.

Table 2 is a list of utility holding companies that posted fourth-quartile average annual shareholder returns over a 10-year period through December 31, 2007, again drawing on calculations from L.E.K. Average annual returns for these companies were about as far below the industry average as the returns in Table 1 were above it. As with Table 1, the industry average annual return was 10.16%, and the last three columns show the performance of each firm’s operating utilities in the three years of the J.D. Power residential electric customer satisfaction surveys. 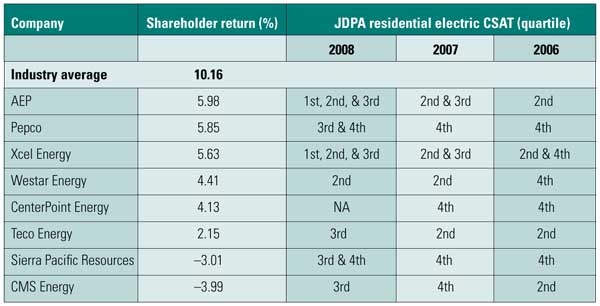 Tables 1 and 2 show TXU and CenterPoint Energy as “NA” for 2008 because J.D. Powers removed them from its national customer satisfaction survey last year. Both were placed in the narrower survey of the Texas market, because those utilities’ scores in the Texas survey can’t be compared to the national survey.

What’s Love Got to Do with It?

Although some of the specifics change from year to year, analyzing several years of data from J.D. Powers and L.E.K. confirm that there is no consistent correlation between shareholder returns for utility holding companies and the customer satisfaction performance of their electric operating companies.

The explanation may be simple: Top-performing utility companies tend to be larger and have a more aggressive business strategy compared to companies with fourth-quartile shareholder returns. Holding companies listed in Table 1 tend to have big, unregulated businesses—power marketing and merchant power generation—which appeal to investors looking for higher returns. The prospect (in many cases, the reality) of higher returns from less-regulated businesses may lead investors to bid up the shares of those companies. Investors are willing to shoulder greater risks if they can receive higher returns.

S&P said it would include utility customer satisfaction performance as one of several qualitative factors to assess the credit-worthiness of utilities. Shipman emphasized that a utility customer-satisfaction performance was a swing factor, not a significant driver, in setting credit ratings for utility borrowers. To date, S&P has made no changes to utility credit ratings because of a utility’s customer satisfaction score, Shipman says.

As regulated entities, the business prospects of many electric utilities often rise and fall on decisions by state public utilities commissions (PUCs). The most important of these regulatory encounters are rate cases—of which there have been and will be many—and strategic transactions such as mergers and acquisitions. Among the most controversial and most significant regulatory actions are decisions on new or upgraded generating capacity.

Regulatory orders on returns on equity (ROE) and strategic transactions result from the blending of “objective” quantitative analytics with “subjective” qualitative judgments of the regulators and their staffs. Despite a regulatory commission’s heavy reliance on quantitative metrics, there is no way to remove the qualitative factors like “just and reasonable,” “used and useful,” and “fair” from the regulatory process.

What does the data tell us about any correlation between customer satisfaction and awarded ROEs? Very little.

Table 3 shows no consistent pattern linking the customer satisfaction of shareholder-owned electric utilities with those utilities’ authorized ROE. The customer satisfaction data comes from J.D. Power while the awarded ROE data comes from the Edison Electric Institute’s annual rate case summary for 2008. All the regulatory decisions in Table 3 came during the 2008 calendar year. Typically, a utility files its application about one year prior to the PUC decision. 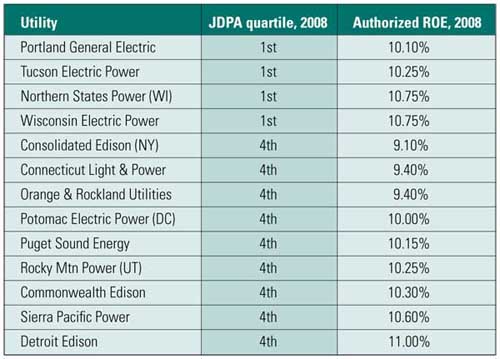 As with Tables 1 and 2, the data in Table 3 raise as many questions as they answer. Why would several electric utilities with fourth-quartile customer satisfaction have meaningfully higher authorized returns than electric utilities with first- or second-quartile CSAT scores? In a world where a 25-basis-point difference (one-quarter of a percentage point) in ROE could mean $25 to $50 million a year in annual revenue, that is the proverbial $64 million question.

A Confused and Inconclusive CSAT World

Two sharply different rationales from utility leaders and managers exist on the question of whether and to what degree their companies benefit from higher customer satisfaction. Utilities with a long track record of first-quartile customer satisfaction performance say they don’t pay a lot of attention to the various studies. They don’t do what they do to win awards. They see customer satisfaction as an outer expression of sound business practices and a sincere commitment to serve customers—an internal driver.

Comments from utilities with fourth-quartile scores have a harder, more skeptical edge: “What’s the return? Why should I make that investment?” or “We see it as something that’s nice to have, but not mission-critical. Besides, doesn’t it increase costs? We’re trying to reduce costs.”

The best summation comes from Grant Yoshihara, managing director at NW Natural, a natural gas utility headquartered in Portland, Ore. He said, “If you run your business in a way that dissatisfies your customers, you subject yourself to more risks. More things could go wrong, particularly in the regulatory arena. Eventually those things will catch up with you.”

—John Egan (johnegan1959@gmail.com, 720-949-4906) is founder and principal of Egan Energy Communications, which works with utilities to improve the impact and lower the cost of their stakeholder communications. He was a former research director at E Source, media relations supervisor at Salt River Project, and reporter at The Energy Daily.