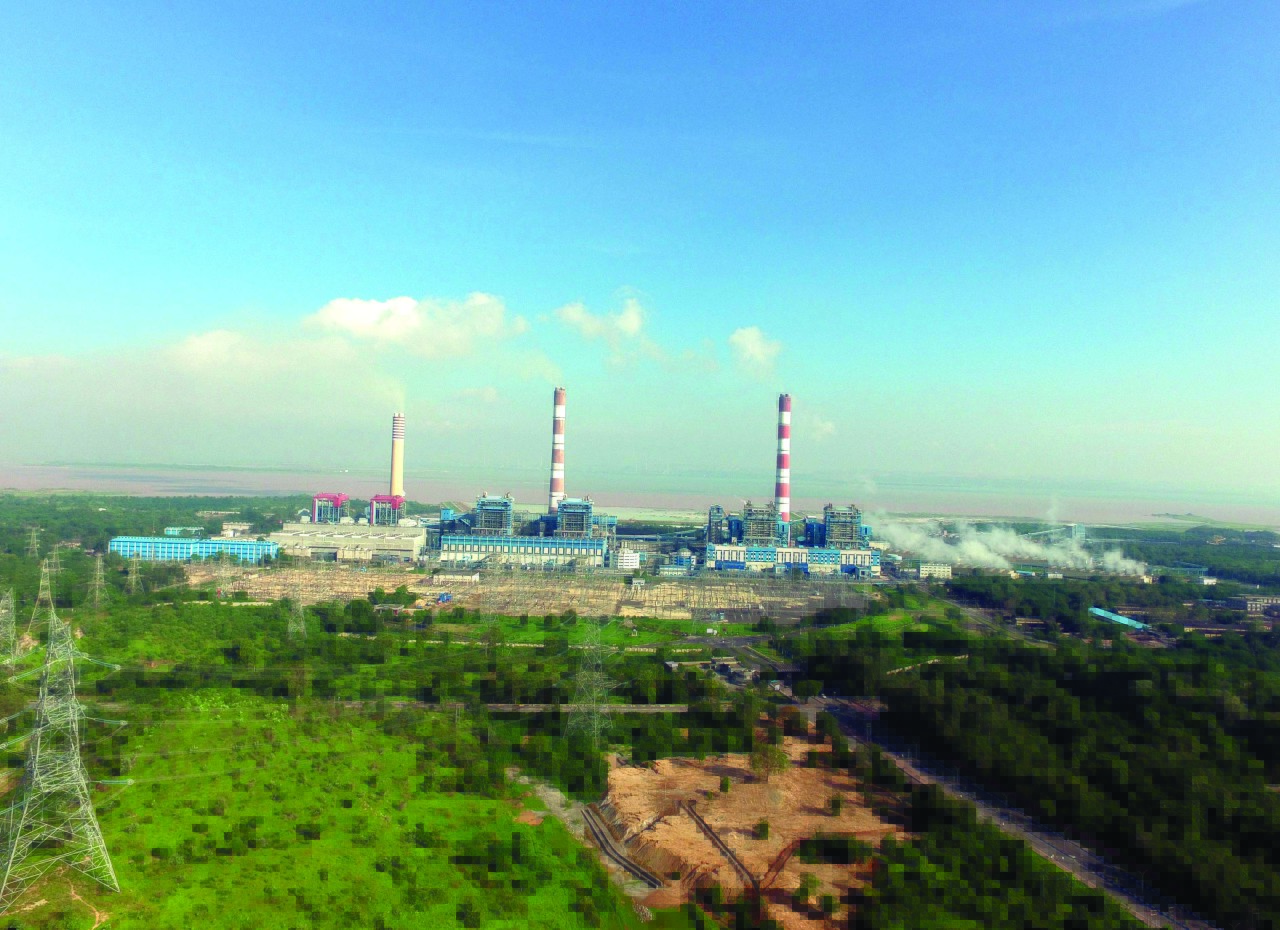 Photo Courtesy: NTPC
India’s ever-increasing need for electricity means coal will continue to be a large part of its power generation, and the Rihand facility is at the forefront of expanding capacity while improving its efficiency, lowering emissions, and serving its surrounding community.

India relies heavily on its coal-fired power plants. This country of more than 1.3 billion people, second in world population only to China, knows it must scale up its electricity generation capacity, while at the same time lowering emission levels as generators try to comply with new environmental standards.

The country has embarked on an ambitious plan to increase its use of renewable energy. Prime Minister Narendra Modi’s signing of the Paris climate accord committed the country to producing 40% of its power from nonfossil-fuel sources by 2030. The government wants only electric cars to be sold in the country by 2030, and it wants to increase renewable capacity to at least 175 GW by 2022, up from 36 GW in 2015.

Projects totaling about 13.7 GW of new coal-fired generation were canceled in May 2017 alone. Punjab state in late August said it would begin retiring all state-owned thermal plants more than 25 years old. But coal-fired power is not going to disappear from India’s landscape, not with the country’s critical need to increase generation from all sources.

The engineers and executives at state-run NTPC Limited (formerly known as National Thermal Power Corp.) are at the forefront of tackling the challenge. NTPC, founded in 1975, is India’s largest power generation company, contributing more than a quarter of the country’s electricity according to government statistics. The company says it has installed generation capacity of 51,635 MW, and plans to increase its capacity to 130 GW by 2032, including renewable additions such as wind, solar, hydro, and geothermal, in addition to its considerable coal resources.

The process of ramping up power generation while reducing emissions is part of what NTPC calls its “Renovation and Modernization” strategy, which includes a plan to rejuvenate older coal plants, expand their capacity, and deliver full power loads while complying with new environmental norms, said Erukulla Nanda Kishore, additional general manager at the Rihand Super Thermal Power Station in Renukut, Sonebhadra, in Uttar Pradesh state. Rihand is one of 20 NTPC coal-fired plants, and with a 3,000-MW capacity is (along with the Talcher Kaniha plant in Angul, Orissa) the second-largest in NTPC’s fleet, behind only the Vindhyachal plant in Singrauli, Madhya Pradesh, which has installed capacity of 3,760 MW and approved capacity of 4,760 MW.

The Rihand plant is a model for NTPC’s strategy. It has expanded its capacity, improved its efficiency, and cut emissions through the installation of advanced pollution control technologies. It is the first plant in NTPC’s fleet to dispose of electronic waste to comply with the country’s environmental requirements, and has taken significant steps to improve safety and manage risks for the 880 NTPC employees and more than 2,500 contractors who work at the plant. 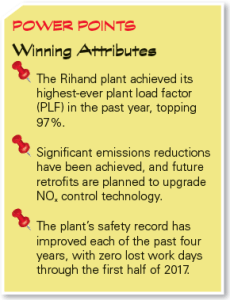 The plant has a three-stage design with six coal-fired units, each with an installed capacity of 500 MW. The first unit was commissioned in March 1988; Unit 2 came online the following year. Units 3 and 4 were commissioned in 2005, with Unit 5 commissioned in 2012 and Unit 6 commissioned in 2013. The plant utilizes pulverized fuel-fired boilers and KWU turbines. Its equipment contract is with Bharat Heavy Electricals Limited (BHEL), the country’s largest power generation equipment maker, which itself is a life member of the United Nations Global Compact (UNGC), a program that commits members to principles of environmental and community stewardship.

“[Rihand] is one of the best in India [for efficiency] when compared to similar capacity plants working with subcritical parameters,” said Kishore. A recent study by the Center for Science and Environment (CSE) of 47 coal-fired plants in India showed the average energy efficiency of plants generating 2,000 MW or more was 32.8%. Kishore and the CSE both noted that NTPC does not disclose efficiency ratings for proprietary reasons, but Rihand has consistently improved its plant load factor (PLF) over the past four years while also lowering its emissions.

“[The] station is generating power as per grid requirement and schedule given by Northern Region Load Dispatch Center (NRLDC), [which] governs demand and supply [of] electricity of [the] northern part of India,” said Kishore. “The station is continuously making efforts to reduce cost of generation and it reduced energy charge rate [which consists of variable cost components, like coal cost and adjusted production cost] of generation from Rs 1.58 in 2015–2016 to Rs 1.31 as of May 31, 2017, resulting in increased demand from grid to station.”

Kishore, along with Sri S. Narendra, the group general manager for the plant, said environmental issues are a driver of NTPC’s modernization plan. Kishore said moving electrode technology was installed in the electrostatic precipitators of the Stage 1 units in the 2016–2017 period, which resulted in an emissions reduction from 95 mg/Nm 3 to 45 mg/Nm 3. He said Rihand has been identified as a pilot plant to install selective catalytic reduction/selective non-catalytic reduction (SCR/SNCR) technology to control NO x, and bring those emissions within new limits beginning in January 2018.

“Space is identified for flue-gas desulfurization [FGD] in Rihand, and experiments are ongoing in another NTPC plant, and a decision [on that technology] will be taken by corporate center based on the outcome of those experiments,” Kishore said. NTPC also is continuing to create carbon sinks, planting 10 million trees around its power plants (including Rihand) over the past year, in addition to 22 million trees planted previously. “We are controlling emissions and contributing to [the] environment with green cover,” said Kishore.

Rihand has made a concerted effort to improve worker safety at the plant; the safety record has markedly improved in 2017 compared to the prior three-year period, and the company has reported no accidents or lost work days for its own employees over the past four years. However, the company did report one fatality of a contracted employee this year, and there also were reports of one fatality of contracted employees in 2014 and 2016. Lost work days due to injury for contracted workers have fallen each of the past four years, dropping from 34 in 2014 to 27 in 2015, 18 in 2016, and zero through the first half of 2017.

The Rihand plant includes a “Safety Park,” which is used to train the facility’s workers (Figure 1). It can simulate critical situations that could arise at the plant, and help workers understand the risks of those situations and also other tasks they might perform. Kishore said the park can help “assess whether the individual is fit to perform a given job, like working at heights, or working in confined areas, [so we] can deploy him accordingly.”

The park has two parts, including a 400-square-meter covered shed, divided into three areas, with mechanical equipment, electrical equipment, and chemical and firefighting equipment for training purposes. It also has four smaller rooms, including an audio/visual area where up to 40 workers at a time can watch safety videos. The park also has a large open space area, used for setting up scaffolding, lifelines, ladders, platforms for height work, and material handling.

NTPC developed a township, Rihand Nagar, as part of its development of the Rihand site, in large part as a service to the plant’s workers because the plant is located in a remote area. The township includes four schools and a hospital that serve the surrounding villages.

“We want to gain confidence from our stakeholders,” said Kishore, noting the importance of serving society in India’s culture. “We are making a positive impact on society through humble service to the surrounding community.” ■