This article reports on a case study performed for a client in Southern California faced with Clean Water Act 316(b) regulation compliance on three once-through cooling facilities. The California-specific regulations will require, among other things, a minimum 93% reduction in intake flow rate for each unit. Compared to the unit’s design intake flow rate, enhanced intake structure redesign to minimize biological impacts may also be required. Alternative plant configurations being considered by the owner for compliance included wet cooling towers, air-cooled condensers (ACCs), hybrid cooling towers, and unit replacement.

The study also considered compliance with California Rule 1304 guidelines regarding Electric Utility Steam Boiler Replacement, which calls for existing capacity replacement to consist of combined cycle or advanced gas turbine technology (defined as those turbines that incorporate compressor intercooling) in order to qualify for an 1:1 air emissions credit.

This article concentrates on the selection process for the unit replacements only and the drivers that are imposed when operating as an independent power producer in a highly saturated renewable portfolio standard (RPS) market. It also includes a discussion of the salient features of the proposed facilities.

The Path to Combined Cycle Selection

Figure 1 is the forecasted 2020 daily load profile of the California ISO (CAISO), in which the owner participates. The existing facilities operate in a peaking mode with low annual capacity factors that address the peaks of the load profile and as intermediate capacity when the large units of the investor-owned utilities are offline for maintenance or repairs.

Operating limitations of the existing equipment are attributable to their original design as steam electric plants, thus they have relatively long startup times and slow ramp rates, typical subcritical and supercritical heat rates, with high fixed and variable maintenance costs in comparison to their competition.

The owner has analyzed his position in the marketplace and recognizes that future participation in CAISO favors peaking and intermediate load range facilities capable of fast startup and shutdown, fast ramp rates, with the ability to perform dual-shift operation. This will result in multiple startups and shutdowns during a single operating day. To fit this mode, the ideal facility would have these characteristics:

This led to the selection of combined cycle technology, requiring the development of a plant configuration meeting the criteria listed above.

Development of the 500-MWe Building Block

Today there are a number of original equipment manufacturer (OEM) reference plants being offered. Each of them has features that meet several of the necessary criteria, but none quite meet all of them. Our task was to glean from what was available and, with the owner, to develop a building block that could be used at any of the three sites, taking into consideration transmission limits, existing unit retirement, and demolition schedules in order to optimize real estate and emissions credit usage. Ultimately, a 500-MWe block was selected. During this process, gas turbine offerings from each of the major OEMs were considered: Alstom (GT24), General Electric (7FA and variants, 7EA, LMS100, Rapid Response Cycle), Mitsubishi Heavy Industries (MHI) (G, GAC, 501DA), and Siemens (SGT6-5000 and variants, SGT6-6000, SGT6-2000E, SGT-800, Flex Plant 10 F, Flex Plant 30).

Our initial screening studies were conducted in order to evaluate the merits of E/D, F, and G class technologies, taking into consideration capital expenditure, heat rate, startup cost, and fired hour expenditures. The larger G frames dropped out early in the analysis due to their starting costs and the 1 x 1 configuration minimum turndown of approximately 210 MW.

One of the very first tasks performed was an evaluation of cooling water requirements and heat rate for F and E/D class technologies (Table 1). 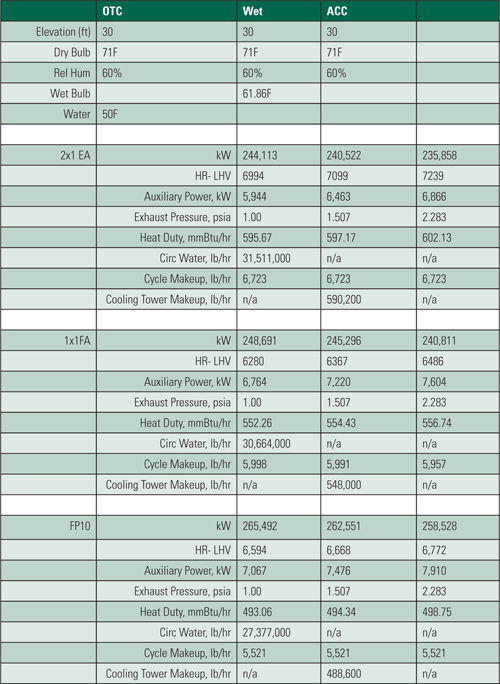 The rough contractor installed cost difference between wet cooling tower and ACC heat rejection for the cases above is a 6% to 8% increase for the ACC case. A water availability and cost study performed by others eliminated the wet cooling tower option for the repowering study. Figure 2 represents an early heat rate versus output evaluation for different technologies and cycle configurations.

Early on, it was recognized that a non-reheat cycle would best match the desired facility characteristics, so the Flex Plant 30 was eliminated. Configurations going forward were non-reheat with the steam cycles optimized to appropriate steam conditions associated with the gas turbines’ exhaust conditions.

The facility’s required characteristics led to a multi-stage generating (MSG) asset configuration designed to generate power across a wide range of capacity with superior and relatively constant thermal efficiency and maximum operating flexibility. Since the project will include multiple generators, often termed “embedded generating units”—whereby combinations of embedded generating units constitute the full operational capability for each building block—the gas turbine start cost evaluation was expanded to include the transition from one stage to the next.

The integration of engineering studies with the owner-performed commercial studies resulted in the selection of a plant utilizing D/E technology, with the optimum number of units being a 3 x 1 configuration. The cycle is non-reheat and the heat recovery steam generator (HRSG) is single pressure with a low-temperature economizer. Design pressure is nominally 1,200 psig with main steam at 975F. A condensing steam turbine with ACC and full flow deaerator is utilized. Figure 3 shows the heat rate comparison of the building block in comparison with two 1 x 1 FP-10s and five simple cycle LMS100 gas turbines with intercooling. These two projects have been recently permitted and are under construction in California.

The heat rates shown are net and include transformer losses and all auxiliary loads inclusive of gas compression. All three configurations are shown at the same site ambient conditions.

Note that, although the building block at full load suffers slightly in comparison to the F frame configuration, its performance across the overall part-load range is superior. Duct firing is utilized solely to cover the transition from three-to-two-to-one gas turbine operation and not for power augmentation. In a market where part-load operation will be the primary operating mode, this transition ability will be providing substantial benefits to the owner. It is the owner’s belief that the facility will see 400 starts per year (figure 4) operating only Monday to Friday, or more than two starts per day on average, with 4,000 operating hours per year. 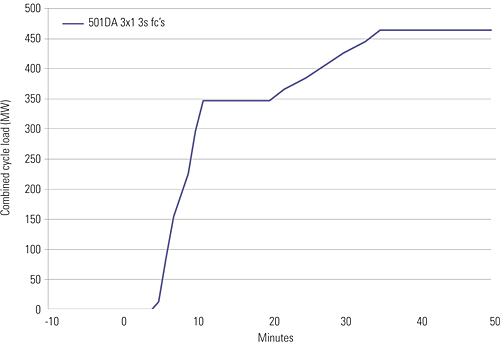 One of the advantages of the building block is that there will be no HRSG startup holds associated with the HRSG metals given the gas turbines’ exhaust gas conditions. This includes the cold, 70F, and no bubble in the steam drum case. To permit the gas turbine to follow its normal startup, special considerations are necessary in the HRSG and steam system. During the development of the building block, we worked with a single HRSG OEM throughout who provided the HRSG design performance characteristics, which went into the development of the building block. Regarding the steam turbine generator, we had discussions with a number of OEMs and are confident that, with the additional balance-of-plant features being incorporated, the startup performance will be achievable. These features will be incorporated into the plant: 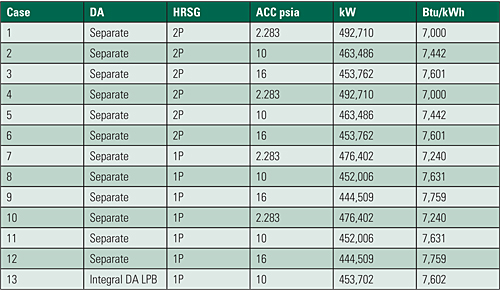 Table 2. Performance under various configurations. This table does not include gas compression load. Source: PEC 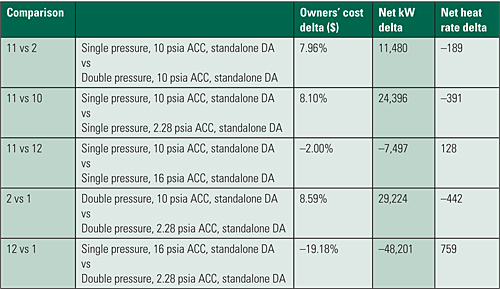 As the owner moves forward to develop these three projects for implementation, the following drivers are being continually considered and reinforce the utilization of the E Class MSG configuration:

With these in consideration, the E-class dispatch models used by the owner provided the highest number of starts per year with the highest hours per start, resulting in the lowest COE (contributed by low capex).

—Bryan J. Eskra is vice president–power, Horacio A. Larios is project engineer, John S. Coons is senior consultant, and George Shibayama is president, with Power Engineers Collaborative, a division of Juhl Energy, Brookfield, Wisc. This article is adapted from a presentation given at the ELECTRIC POWER Conference & Exhibition.