Combined heat and power (CHP) is an underutilized tool that could have a huge impact on industrial energy efficiency. Recycling heat to generate electricity makes a lot of sense. But how do the benefits of CHP stack up against building new wind, solar, or natural gas that could serve onsite energy needs?

CHP does very well, actually. The average capacity factor is higher for CHP than solar or wind because it isn’t intermittent, and is even higher than natural gas combined cycle plants because of how it is dispatched. The annual amount of electricity generated is higher; the amount of space it takes up is smaller; the average energy savings are double those of solar PV and natural gas; and the CO2 and NOx savings are better.

This doesn’t address the straight economics of building CHP projects instead of the alternatives, though. You may get more out of it, but don’t you have to pay significantly more?

Surprisingly, no. Combined heat and power is economical compared to alternatives, and low natural gas prices have further reduced the costs of CHP. As Figure 1 from the Department of Energy shows, large CHP is by far the most economic investment in terms of generating cost. Medium-sized CHP projects (around 1 MW in size) are still more cost-effective than wind, PV, coal, and combined cycle gas. 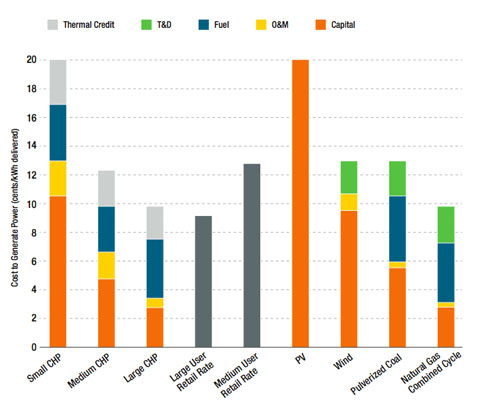 1. This example from New Jersey shows how competitive CHP can be against other generating options. Source: Department of Energy.

The future isn’t looking any better. EIA projects that CHP capacity stays at 82 GW out to 2040, supplying an amount of electricity that rises slightly with overall demand. To put that in context, while CHP currently constitutes about 9% of total generating capacity in the United States, the achievable potential is over 20%.

The federal government has made some efforts to increase CHP utilization. The Obama administration signed an Executive Order with the goal of getting 40 GW of new CHP systems installed over the next decade. This would save 1 quadrillion Btu of energy and 150 million metric tons of CO2 annually. The Environmental Protection Agency has a CHP Partnership program, and the Department of Energy has regionally focused Clean Energy Application Centers. But nothing has yet created the necessary level of enthusiasm around this promising efficiency technology.

So if the economics are good and the federal government has shown its support through promotion policy, why are there only 82 GW of capacity in the U.S.? There are a few good reasons:

1. Unclear utility value proposition: The utility cost recovery business model is not conducive to operating wires and providing backup power to buildings. This has led to several barriers, including interconnection policies, tariff structures, and standby rates.

2. Limited supply infrastructure: Because the market for CHP hasn’t taken off, there are a limited number of suppliers, resulting in higher costs.

4. Siting and permitting: CHP modules are a combination of fuel, waste, electricity, and storage, and are subject to a wide range of regulations.

The Department of Energy notes two innovative models that could be used to get more combined heat and power in the system. The first is forming partnerships with utilities, which have access to lower-cost capital and longer investment time horizons. The second is state policy. There has been some policy support for CHP in a handful of states, but a number of the states with the largest untapped potential have the least policy support.

“Some states and municipalities are exploring new, innovative policies. For instance, there are policies that could encourage development of industrial ecosystems where a big heat user can use CHP for its heat and electricity needs but also share waste heat and excess electricity with other nearby companies and institutions,” said Mathias Bell, a consultant at Rocky Mountain Institute.

However, Sean Casten, president and CEO of Recycled Energy Development, said that capacity investments can be hard to predict. CHP benefited from the passage of the Public Utilities Regulatory Policy Act (PURPA), when the incentives aligned for those projects and capital investments increased. But the sector was hurt when many of incentives disappeared under the Energy Policy Act of 2005. Natural gas benefited from a similar boom in the early 2000s, during which time over half the current natural gas fleet was built. The popped Enron bubble largely put an end to that. The new tax credits for wind have since sparked capacity build-outs of that resource that continue today, albeit slowing with congressional dysfunction on tax policy.

Casten noted that when generation resources are chasing the spot market, lag time on permitting and construction means a company would have to know spot electricity prices five years in advance to make the right market decision. Given how unlikely that is, most new opportunities are the result of regulatory shifts. However, Casten believes CHP is still a great long-term bet because it has the added benefit of hedging heating costs.

“It is the right kind of generation in the right market,” said Casten. “The trouble is finding capital that is patient enough to take the investment.”

Combined heat and power has a range of benefits for industrial consumers, and it represents a vast market opportunity. But there are still plenty of regulatory obstacles standing in the way of another period of strong deployment. It will take more than an executive order to reverse the decline.

—Adam James is executive director of the Clean Energy Leadership Institute and a research assistant for Energy and Environmental Policy at the Center for American Progress. This column was originally published by Greentech Media and is reprinted with minor edits for this publication.