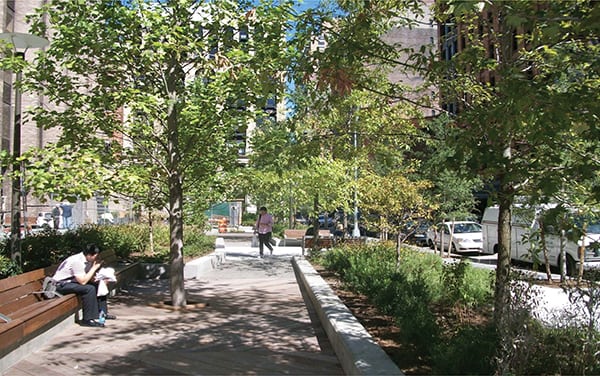 NYU needed to repower its decades-old cogeneration system and cut emissions at its main campus in Lower Manhattan. The new gas turbine–based system cut the university’s energy bills by $5 million a year—and kept it going when Hurricane Sandy walloped the East Coast.

When figuring the payback period on a new power plant, calculations are almost always done in dollars and cents: how much it will cost, what will be saved, and what additional income will result. More intangible benefits are typically considered only on the periphery, in part because measuring their value can be difficult.

There has perhaps never been a power plant that proved its worth as quickly as the new 13.4-MW cogeneration plant at New York University (NYU), which came online in early 2011. That’s because, less than two years later, the city took a body blow from Hurricane Sandy, which knocked out power and wrecked utility and generation infrastructure up and down the Atlantic Coast. Much of New York City was without power for days, and for weeks in some areas. The lights at NYU, however, never flickered.

When NYU began looking at upgrading the 1970s-era 7-MW cogeneration system at its Greenwich Village campus, no one was thinking about hurricanes. The impetus instead came from two factors: The old diesel engine–based system was nearing its end of life, and the university wanted to support more of the campus’s power, heating, and cooling needs. The old system had provided power to only seven of the campus’s 70 core buildings, and only in island mode—only limited backup from the grid was available in an emergency.

The other impetus came from state air pollution regulators, who had told the university that it needed to shut down the old system by the end of 2008, as well as from the New York City’s PlaNYC Climate Challenge, drafted by Mayor Michael Bloomberg in 2007, which called on the city’s universities and colleges to voluntarily reduce greenhouse gas emissions by 30% by 2017. That meant either shutting down altogether or coming up with a clean, modern, high-efficiency system to replace the old one. The university ultimately settled on a gas turbine–based plant.

The Vanderweil Power Group was selected to provide design and engineering services for the $125 million project, while Skanska USA provided construction management.

Like much institutional generation in densely populated cities, the NYU cogen plant is located underground, underneath a plaza at the Courant Institute of Mathematical Sciences, about a block from Washington Square Park.

Construction began in September 2008. The first step was excavating space for the new system in front of the building. Because of the site limitations, the entire system had to be squeezed into a 200-foot-long vault that was only 60 feet deep and 40 feet wide. Rigging the gas turbines, heat-recovery steam generators (HRSGs), and other heavy equipment into the new plant was a challenge in the narrow, mostly residential streets of Greenwich Village, but for the experienced construction crew used to working in the tight confines of Manhattan, it was largely business as usual (Figure 1). The project was completed in January 2011 after 28 months of construction.

The core of the system consists of two 5.6-MW Solar Taurus 60S dual-fuel gas turbines. Each turbine drives a generator, and each feeds its own HRSG supplied by Cleaver-Brooks Nebraska Boiler.

The 600-psi steam from the HRSGs is put to a variety of uses. First, it’s passed through a 2.4-MW steam turbine generator. The exhaust from the turbine is then fed to another pair of heat exchangers to make high-temperature hot water and, when necessary, to a 2,400-ton steam-driven chiller to make cold water for air conditioning. The entire system is run from a fully digital control system that maintains peak performance and efficiency that approaches 80% in normal operation. The plant is capable of producing 20,000 lb/hr of steam, and when an auxiliary boiler is fired up, it can produce another 40,000 lb/hr.

The connection to the Consolidated Edison (ConEd) grid was upgraded with a new transformer vault and six new transformer banks. The system includes protective relays to insulate the microgrid from fluctuations in the utility grid when necessary.

Though the new system doesn’t cover the entire campus, it supplies power and heat to much more of it than the old one. Twenty-six buildings now get electricity from the system, while 37 get their heating from it and 26 get chilled water for cooling. The system is normally linked to the ConEd grid in a synchronous interconnection, and power flows back and forth as the campus’s loads change. But it is also capable of disconnecting and going into island mode, powering the campus on its own.

NYU announced when the plant was complete that it was projected to save the university around $5 million to $8 million a year in energy-related costs. The new cogen system would emit 23% lower carbon emissions, while NOx and particulate emissions were projected to drop 68% compared to the old fuel oil–fired plant.

The project even gave NYU the opportunity to give that part of the community a face-lift. Because the old plaza above the plant had to be completely removed as part of construction, a new community park was built as part of the job. The once-generic sidewalks outside the Courant Institute were turned into a park-like setting with extensive seating and gardens filled with native plants (shown in the header photo). All in all, the project seemed a highly worthwhile investment.

But the system’s real value was yet to show itself.

In the fall of 2012, New York City had not taken a hit from a full-strength hurricane in more than 25 years. And though there had been a few near-misses throughout the 20th century, not since the Long Island Express hurricane of 1938 had the city seen the sort of widespread deaths and destruction associated with major storms such as Hurricanes Katrina and Andrew.

The system that would become Hurricane Sandy formed in the Caribbean Sea south of Jamaica in mid-October. It reached hurricane status on October 24, and over the next few days, moved north across Jamaica, Cuba, and the Bahamas, before turning east into the Atlantic. Though it had killed at least 60 people (mostly in Haiti) by this point, it appeared to be ready to dissipate.

On October 28, however, the storm combined with a low-pressure system in the Atlantic, causing it to re-intensify and turn sharply to the northeast—directly toward the New York–New Jersey area. The eye of the storm made landfall the following night about five miles north of Atlantic City. That location meant the New York City area to the north would take much of the brunt of the northwestern edge of the hurricane, where the strongest winds and storm surge would be.

Though the 48 deaths and widespread flooding across the city dominated the headlines, the damage to the city’s electric grid was also immense (ConEd would later estimate its repair costs at $450 million). Power was out south of 35th Street in Lower Manhattan for nearly a week, and it would be more than a month before electricity was completely restored across the city. Most of New York had no choice but to wait for repairs.

At NYU, it was a different story.

On the night of Oct. 29th, Sandy’s storm surge came over the banks of the East River and took out ConEd’s 14th Street substation. When the transformers at the substation exploded—a blast that was visible for miles—voltages throughout Manhattan began dropping rapidly, and the NYU microgrid that had been drawing small amounts of power from the grid suddenly began sending dangerous amounts of it out. The protective relays automatically tripped, disconnecting from ConEd and putting the microgrid into island mode as the rest of Lower Manhattan went dark.

Suddenly finding themselves the sole source of power and heat for much of the university put the cogen plant staff under considerable stress, since the safety net normally provided by the ConEd grid was now gone. The powered portion of the campus rapidly became an oasis for staff, students, and surrounding community members without electricity; later, it became a command center for emergency workers throughout Manhattan as the city struggled to recover.

Under such circumstances, normal working hours went out the window, and the engineers simply did whatever had to be done to keep things running smoothly—which they did. “Essential utilities provided by the NYU microgrid were consistently supplied for the duration of the Sandy event with no interruptions to key NYU facilities,” John Bradley, NYU’s assistant vice president of technical services told POWER.

For demonstrating the efficiency and reliability gains possible with modern cogeneration and an associated microgrid, NYU’s system is named a POWER Top Plant. ■

[This story has been updated to correct the name of the boiler vendor.]