Last month, as Hurricane Sandy pounded the East Coast and knocked out power for much of Midtown and Lower Manhattan, there were a few islands of relative stability. As New Yorkers elsewhere struggled with the cold and lack of electricity, the lights stayed on at New York University (NYU), along with the heat and hot water. The reason was a $125 million natural gas–fired combined heat and power system that NYU completed last year.

NYU has been generating at least some of its own power for more than 30 years, but its previous cogeneration plant was an old-style fuel oil–fired generator that supported a much smaller portion of the campus. It was also a source of emissions that regulators had told NYU it needed to cut.

The new plant comprises two 5.5-MW dual-fuel (gas and diesel) Solar Taurus 60S series turbines with two heat recovery steam generators that generate 20,000 lb/hr of steam unfired and 60,000 lb/hr fired, plus a 2.4-MW steam turbine. Exhaust steam from the turbine is routed to the pair of heat exchangers to generate hot water and to a steam-driven chiller for cold water and air conditioning. The full system is able to achieve nearly 90% efficiency. Despite doubling the output of the old fuel oil–fired system, it generates 68% lower emissions of NOx, SOx, and particulates and has saved the university between $5 million and $8 million a year in energy costs.

The system is normally linked to the Consolidated Edison grid, and power can flow back and forth. But when the grid went down on Oct. 30, NYU isolated its system and went into island mode. One can be certain that no one at NYU was regretting the expense that week, as much of the rest of the city waited in the cold and dark for power to be restored.

And NYU wasn’t alone. Except in a few areas where the natural gas system was also knocked out, CHP systems up and down the East Coast kept the lights and heat on after the grid went down. (Something the CHP industry’s PR agencies were keen to alert me to after the storm.)

Over in the Bronx, Co-Op City, the largest housing cooperative in the U.S., weathered the storm in good shape thanks to a 40-MW combined cycle CHP system that supplies power and heat to its 60,000 residents. At a Red Cross disaster relief shelter at the Salem Community College in Salem County, N.J., a CHP system powered by three Capstone C65 microturbines supplied heating and emergency power as the hurricane raged. In Greenwich Village, one of areas hardest hit by flooding, a new Tecogen InVerde CHP system kept things running for the 20-story Brevort co-op apartment tower.

Given the obvious benefits of CHP—higher efficiency, reduced transmission costs, reduced emissions, and enhanced reliability—why has it not seen greater utilization in the U.S.?

CHP is a major source of energy in many countries in Europe—in Denmark, Finland, and the Netherlands, for example, CHP accounts for over 30% of total generating capacity. The European Union’s 2004 Cogeneration Directive required member states to promote CHP and remove barriers to its deployment. The recently approved Energy Efficiency Directive requires that CHP be considered for any new or substantially refurbished generation facility. In addition, many European countries have used policy tools such as feed-in tariffs to support CHP.

In the U.S., CHP accounts for a mere 8% of total (industrial, commercial, and electric power) capacity. But it gets worse: Most CHP in the U.S. is small scale; NYU’s 13.4-MW system is fairly typical. In the U.S. electric power sector, only 4% of the total electric generating capacity is CHP, and most of those plants are built to supply their waste heat to an adjacent industrial facility.

Much rarer in the U.S. are units like Verbund Thermal Power’s brand new combined cycle plant in Mellach, Austria, which can pump out 838 MW of electricity (MWe) and 400 MW of district heat (MWt) at an overall efficiency of 80%. While examples exist, such as GenOn’s 256-MW Kendall Cogeneration Station in Cambridge, Mass., they tend to be much older and less efficient—the Kendall plant first came online in 1949 (Figure 1). 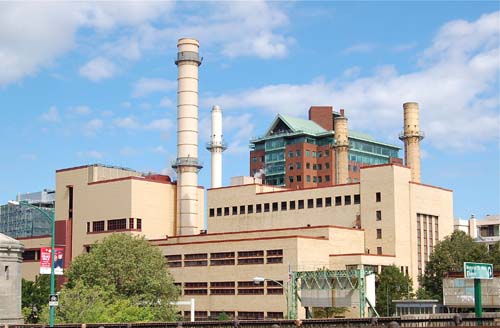 A September report from the Environmental Protection Agency (EPA) identifies several reasons why CHP has struggled to gain a foothold in the U.S.:

But things may be changing.

As I discuss elsewhere in this issue, the Obama administration has set an ambitious target of adding 40 GW of CHP generation to the nation’s grid by 2020, which would mean doubling the current installed capacity in less than a decade. Twenty-three states include CHP as some part of their renewable portfolio standards, and several states—including California, New York, Massachusetts, New Jersey, and North Carolina—have initiated specific incentive programs for CHP.

While the EPA has overseen the Combined Heat and Power Partnership (a public-private coalition composed of the EPA and 400 industry, state, and local representatives) since 2001, that group has mostly kept a low profile. That will likely change as the drive to add capacity ramps up.

Most CHP has relied on natural gas as a fuel. Volatility, uncertain supplies, and high prices during much of the 2000s put limits on further expansion. Indeed, CHP additions plummeted from 2001 to 2006. But since 2010, as gas supplies have surged and prices have fallen, gas utilization has grown. In 2005, 51% of on-site generation was from gas; last year it had climbed to 58%. That’s a trend likely to continue.

CHP also has benefits for the environment. The increased efficiency means lower emissions, and since—as with NYU—a switch to modern CHP often means a switch from dirtier fuel oil generation to gas, there are additional gains even if generation capacity is not increased. Even without fuel switching, the gains in efficiency are attractive to many established industries. And if the facility has access to, or can generate, renewable gas—like the new CHP plant at the University of British Columbia profiled in this issue, or the tri-gen plant at the University of Iowa that was named a POWER Top Plant in September—the environmental profile is even rosier.

The EPA study mentioned above projects that there is potential CHP capacity of 130 GW that could be added to existing industrial, commercial, and residential facilities. Although this figure is technical rather than economic, the study estimates that the economic potential is at least 50 GW, and likely higher, as long as gas prices remain steady.

To put those numbers in perspective, the Brattle Group recently predicted between 59 GW and 77 GW of coal plant retirements over the next five years as a result of economic and regulatory factors.

That suggests a big opportunity in the works—if the CHP industry can grab it.