As liquefied natural gas (LNG) continues to draw attention in the gas market, with the first new U.S. LNG export terminal in decades coming online next year, another liquefied gas—propane—is beginning to expand its share of the mix as propane power options continue to grow.

While propane-powered engines and microturbines have been around for a long time, they’ve always taken a back seat to diesel for a variety of reasons—primarily cost. Diesel has historically been less expensive than propane, but a combination of higher crude oil prices, a glut in the natural gas liquids market, and growing environmental regulation of diesel engines has made propane power generation more attractive.

Propane (also referred to as liquefied petroleum gas, or LPG) is a by-product of natural gas processing. Compared to LNG, the infrastructure required to make the switch to propane power is far less challenging. Though generation with propane results in slightly lower output and efficiency compared to natural gas, propane is much easier and less expensive to compress, ship, and store than LNG (propane liquefies at –42C compared to –260C for natural gas) or compressed natural gas (which must be stored at far higher pressures: about 3,000 psi versus 100 psi to 150 psi for propane). Propane-powered turbines can be used for the same simple cycle, combined cycle, or cogeneration applications as natural gas–fired turbines.

For island grids dependent on imported fuel oil, propane power is especially attractive. Though it’s not as clean as solar or wind, it’s far cleaner than diesel while still being dispatchable.

The U.S. Virgin Islands Water and Power Authority (WAPA) is in the middle of a $150 million transition from fuel oil to propane. The project is expected to cut WAPA’s fuel costs by 30%, amounting to annual savings of around $90 million. The seven GE turbines at the 198-MW plant on St. Thomas and the 118-MW plant on St. Croix that previously ran on No. 2 fuel oil are being converted to dual-fuel operation by Dutch firm Vitol.

WAPA received its first load of propane for the project in October, and commissioning and testing of the plants is expected to begin this month. Going forward, most of the project’s propane will be stored on a permanently moored very large gas carrier ship, with land-based tanks adjacent to the plants refilled as needed using small barges.

The market potential for propane power can be seen in moves generation manufacturers have made recently in positioning their products for use with propane. Finnish firm Wärtsilä, which has deployed its large engines for utility-scale generation around the world (particularly in applications such as island power plants) recently announced that its flagship 34SG engine has been adapted for dual-fuel applications running on either natural gas or propane, without requiring physical modifications. Wärtsilä’s first propane-fired power plant, which comprises two 20V34SG engines, is under construction in El Salvador and will be operational by the end of 2015. 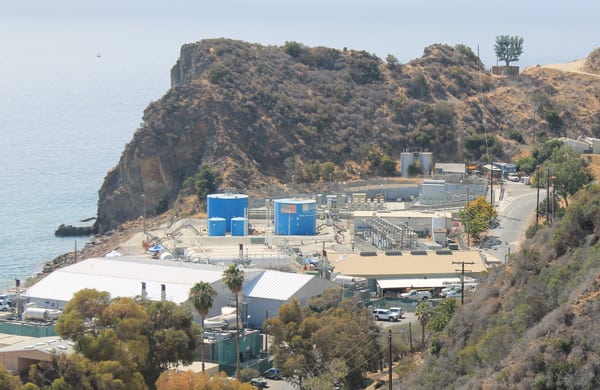 According to Greg Ezzell, vice president of business development for Rocky Mount, N.C.,–based Transtech Energy, which markets a range of small propane-fired power plants (one is shown in the header image), most of the current demand for propane power comes from emerging markets in Latin America and the Caribbean, where electricity is typically produced from diesel and heavy fuel oil.

“With most major manufacturers of gas turbines and gas engines for power generation promoting LPG and natural gas systems in many of these areas,” he said in a recent blog post, “the conversion of base load power production from diesel and fuel oil to LPG has taken hold as a way to lower energy costs while promoting lower carbon emissions.”

Even next-generation power sources such as fuel cells are looking at propane. Connecticut-based FuelCell Energy (FCE) markets its Direct FuelCell products as being able to seamlessly switch from natural gas to propane as needed. FCE has supplied one propane-powered fuel cell plant to the U.S. Navy for generation at a base in Hawaii.

Still, current numbers for propane power generation are small. Estimates are that around 120 propane-powered gas turbines are in operation worldwide, the vast majority of which are under 100 MW in size. (The Energy Information Administration does not provide individualized data for propane generation, which is included with petroleum liquids, suggesting the number is small.)