Construction of the Portlands Energy Centre was a logistical dream: A mothballed power plant next door had an active switchyard, natural gas pipeline, and cooling water structure. The new facility put peak power into the Ontario Power Authority’s grid from its two combustion turbines only two years after collecting the necessary permits. The entire plant entered commercial service on April 23, 2009 — six weeks early.

The Portlands Energy Centre (PEC) is a gas-fired plant located on a 12-hectare parcel of land beside Lake Ontario in Port Land, about 5 kilometers southeast of downtown Toronto (Figure 1). The project site, created from a recovered landfill in 1912, has historically been used for power generation. Today, the site includes the R.L. Hearn Generating Station, built in the early 1950s and mothballed in 1983. 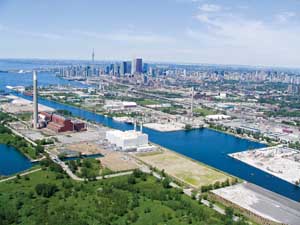 However, the 115-kV Hydro One substation fed by Hearn is of strategic importance to the City of Toronto, and its proximity facilitated a direct grid connection for the new project located adjacent to Hearn. The site also has rail access and is close to a natural gas pipeline that supplied the Hearn plant in previous years. In other words, the site was ready-made for a new state-of-the-art combined-cycle plant.

The nominal 550-MW combined-cycle plant is configured as a 2 x 1 combined-cycle power block built on two 181-MW General Electric Frame 7FA combustion turbines outfitted with dry low-NOx systems. Each turbine exhausts into a horizontal triple-pressure heat-recovery steam generator (HRSG) with reheat and is configured with duct burners that can generate enough steam to produce an additional 50 MW from each HRSG in the nominally rated 290-MW Alstom steam turbine. Total project cost is expected to be approximately $730 million.

Provisions have been included in the plant design to allow for cogeneration, in the form of extraction steam directed to a heat exchanger. The facility is designed such that in the event of a steam turbine failure, steam can be bypassed to the condenser, thereby allowing both combustion turbines to continue operating.

Almost 220,000 gpm of once-through cooling water from the ship channel condenses steam, causing a discharge temperature rise of 5C. Each gas turbine can operate in simple cycle using a exhaust gas bypass stack. Lake water is pumped from a new intake on the shipping channel and discharged into the outer harbor via the existing Hearn discharge channel. The intake structure consists of four channels, one for each of the three circulating water pumps and one for the auxiliary cooling water pumps, traveling screen wash pump, and raw water pumps. Further dredging of the discharge channel was required to make the necessary flow profiles possible.

Three fuel gas compressors (two operating, one standby) boost natural gas from pipeline pressure to that required by the combustion turbines. Each compressor uses a 1.8-MW motor. A single emergency diesel generator rated at 1.8 MW was also included. A common building houses the combustion turbines, HRSGs, steam turbine, and balance-of-plant equipment. The HRSG stack, located outside the building, has a diameter of about 5.5 m and extends 75 m above grade.

Simultaneously, an engineering, procurement, and construction contract was negotiated between PEC and SNC-Lavalin and signed on July 31, 2006.

Simple-cycle completion was achieved in May 2008 to accommodate OPA’s requirement for energy during the peak demand season, June through September. PEC entered the acceptance test phase on April 13 and reported its successful completion on April 21. The project turnover from SNC-Lavalin was completed on April 22, followed by commercial operation of the plant the following day — six weeks early.

"This is another great day for the Portlands Energy Centre, Ontario Power Generation, TransCanada and SNC-Lavalin, and the people of Toronto," said Curtis Mahoney, PEC general manager. "We are very proud of the many men and women who worked around the clock to complete the construction of PEC. It is on line on budget and weeks ahead of schedule."

Keep the Noise Down

PEC is located near residential and other commercial facilities, which require the plant to meet a far field noise limit of 40 dBA at the nearest receptor. Frequent, nonemergency-type emitters (such as start-up and shutdown systems) are included in this criterion. All safety relief valves are equipped with permanent silencing to meet the criteria plus 10 dBA.

PEC was focused on being a good neighbor and involved local stakeholders in the development process and construction status by forming a Public Relations and Community Liaison Committee. That committee provided recommendations to PEC regarding key aspects of the facility design and plant operations, including landscaping plans, emergency preparedness plans, and other evolving issues, such as the city’s area redevelopment plants.